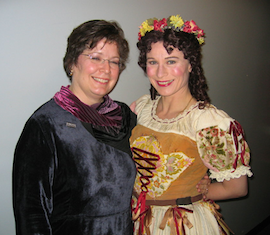 Barbara Heroux, artistic director of Lamplighters Music Theatre will be stepping down from that position next spring, at the end of the company's 60th anniversary season. She has been a Lamplighters company member since 1974, with 13 of those years in a management role. In the announcement, Heroux said:

I’ll always be a Lamplighter — you don’t resign from your family — but it’s time for somebody else to take the reins, somebody with the passion and energy to take this wonderful company to its 70th anniversary and beyond.

Heroux will remain a stage director for the Lamplighters and other companies around the Bay Area, and continues as executive director of Volti, the San Francisco-based professional choir. As a singer and actress, she has received four Bay Area Theatre Critics Circle awards (one each as director and performer, two as playwright), as well as awards for Best Director and Best Production (Princess Ida) at the 1995 International Gilbert & Sullivan Festival in Buxton, England.