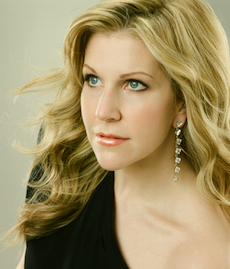 If ever a mezzo-soprano’s name was guaranteed to bring a smile to the faces of Bay Area opera lovers, it’s Joyce DiDonato’s. Within three years of participating in San Francisco Opera’s summer Merola Opera Program in summer 1997, the mezzo we’ve taken to our hearts had made a name for herself by singing the role of Meg in the Houston Grand Opera world premiere of Mark Adamo’s Little Women. By the time she returned to San Francisco in the 2003–2004 season to sing one of her signature roles, Rosina in Rossini’s Barbiere di Siviglia, she had already performed at La Scala, with the New York City Opera, and in Carnegie Hall.

Now one of the world’s foremost mezzos, DiDonato is set to return on Nov. 20 to perform arias from her spectacular new CD, Drama Queens, in Weil Recital Hall at Sonoma State University. Six days before her performance with Il Complesso Barocco, the artist who was born Joyce Flaherty in Prairie Village, Kansas, spoke with SFCV about her forthcoming recital and the new CD on which it’s based.

What are your feelings about bringing your new repertoire to the Green Music Center’s wonderful new hall?

The European audiences kind of went insane for this program in Vienna. We had to do five encores! We probably could have done more, but I actually pulled the orchestra offstage with me. And that’s the Viennese. In Hanover, in Berlin, they were on their feet, which is something that doesn’t happen that often over there. So I think this a real special project. It’s really unique, and I would love people to make an effort to come. I love all the concerts I do, but I wouldn’t make this plea if I didn’t think there’s something really special about this one.

I’m accustomed to hearing the term “Drama Queens” bandied about in gay circles. Has it become acceptable parlance in the larger community, or do you have gay friends who suggested the title?

The title came to me at about 3:15 in the morning. The only thing I knew about this next CD project was that it was going to be Baroque music, and not only Handel arias; it had to have different composers in it. I was thinking how much I really want to sing “Piangerò la sorte mia” from Handel’s Julius Caesar, and how I loved singing [his] Alcina, and that the type of pieces I wanted to sing were these big, female characters.

Literally, even before I had any specific titles other than “Piangerò,” my mind went, “Drama Queens!” It literally woke me up in the middle of the night, and I knew that that’s what it is.

Yes, I am a big Friend of Dorothy’s, no question, so that is not a term that was foreign to me at all, but I found it to be humorous in the right way and also terribly descriptive of what this project would be. And, sure enough, it’s turned out to be that way. It’s not quite so tongue-in-cheek in terms of its steak-and-potatoes musical fare. I don’t find that these women are particularly hysterical or superficial. Quite the opposite: They are solid and emotionally charged. But they are Baroque royalty, and it is quite dramatic, so the title seems to fit.

What was the audience for these operas? Was it mostly the nobility and upper classes, or were there a lot of homespun music critics and corn-fed gals-made-good in the audience?

I think it was a mixture. Today, we have the social royalty of Kim Kardashian, if you can even call her “royalty” — women who are untouchably rich, and always evoke the imagination of the everyday person. To see a Queen or a woman of nobility fall on the stage has always been a real exciting thing, for some reason. We love to see the big ones fall.

I don’t find that these women are particularly hysterical or superficial. Quite the opposite: They are solid and emotionally charged. But they are Baroque royalty.

I think these operas were a way for the everyday audience to live vicariously. Nobody in the monarchy was touchable at that time. We have the same thing with Queen Elizabeth today. Queens are supposed to always carry themselves with propriety. There’s no emotion on the face. Poor Diana was never able to really show what she was feeling; it was all behind doors. So these operas about Queens gave people a chance to peek in the bedroom of these ladies, and gave “them” a safe environment where they could say whatever they wanted on the stage, within reason. It’s why we’re still fascinated by these kinds of personalities, and why they come to life in such a big way.

You’re currently at the local NPR station doing interviews for a recital in Kansas City just four nights before you sing here. How much of the year are you on the road?

Is it working for you? Do you have enough time to breathe and recoup?

I have two really wicked years the last two years when I think I was overscheduled. I survived, but I’ve realized that I don’t want to just survive at the end of the season. Strategically, I’ve worked in some more breaks, a little bit more rest between jobs, which is really important. I think it will be more manageable from here out. But I love what I do, and it’s hard to say no. But the key to longevity is to make sure I’m careful.

I sometimes travel with my husband, conductor Leonardo Vordoni. He’s actually doing the rehearsal of Don Giovanni at Peabody Conservatory this afternoon. We did Marriage of Figaro together at Chicago Lyric, and we’ll do a Capuleti next fall in Kansas City.

A lot of the roles you sing on the CD are soprano roles, albeit pitched a bit lower because you sing in Baroque pitch?

Exactly. At that time, there was no real differentiation between what we would now call a soprano and a mezzo-soprano. I recorded Alcina maybe five or six years ago with Alan Curtis, with whom I also recorded Drama Queens. When he proposed it to me, I said, “Alan, you’re crazy, that’s a soprano role,” but he told me to just look at it.

I have yet to come across an aria or opera where I haven’t been able to find the emotional truth of the character.

When you look at Alcina, Cleopatra, and some of these other roles whose arias I sing on the CD, you see that Cenerentola goes higher than some of them. They’re quite centrally written, with a little bit of extension on the top. The reason we think that they’re high, high, high roles is that people such as Joan Sutherland and Beverly Sills turned them into another thing with all their ornamentation — literally, going up an octave from what was written. So when I took Alan at his word, I discovered that they sit really comfortably in my voice.

I also ornament in a different way. I don’t sing the coloratura high-E ending anywhere, so they fit wonderfully. Something like “Piangerò,” which is so centrally written — it perhaps touches an A, but most of it is quite central — is interesting to hear with a voice that has a little more substance or weight in the middle part of the voice, and isn’t sung by a coloratura who’s perched at the high end of things. I think it adds a different kind of personal weight and suffering to Cleopatra.

And you just recorded Donna Elvira in Don Giovanni . Does that role’s tessitura also sit well for you?

Yes, and there’s one big key to that. I do “Mi tradì,” the big aria, down a half step. It’s a transposition that Mozart actually did, as well. I would not sing the role onstage nor record it without the transposition; it’s that big of a change.

I could sing it a half step higher, but I wouldn’t be able to make the same color choices or have as much vocal freedom. So I sing it down, and because the change is in Mozart’s hand, the “Mozart police” don’t come after me. Otherwise, I wouldn’t do it.

There’s a school that says, “if Verdi didn’t write it, we don’t do it.” But high notes were added after Verdi’s time that he didn’t sanction, and the dramatic impact of his music did not lessen, nor his reputation decline. If you’re, perchance, moving into the period of Verdi and Puccini, are you encountering this kind of stylistic absolutism?

I’m not going in that direction, but I am doing more Bellini and Donizetti big bel canto pieces. I do Maria Stuarda at the Met[ropolitan Opera] in January with Maestro [Maurizio] Benini, and I’m sure he’ll have strong ideas on it.

I respect the conductor’s right to make strong choices that are based in musicology. I was doing a Barber of Seville in Milan with a young conductor who had a very strong idea that there should be no big high notes at the end of “Una voce poca fa” or “Largo al factotum.” I told him that I understood what he was saying, but this is Milan — and if we don’t do the high notes, we’re going to be booed off the stage.

We can’t pretend that 100 or 200 years haven’t passed. What the audience wants, I think, should be weighed in the right proportion against what is correct and what the performance practice has been. The performers and conductor need to make up their own minds, and they can even try it different ways at different times. I’m a big believer that music should constantly be created.

I assume the conductor heard you and listened when you spoke of being booed offstage?

Well … moving right along. Certainly Julius Caesar (Giulio Cesare) has a credible plot, which, together with gorgeous music, helped achieve its popularity. How many of the plots of the operas whose arias you sing on Drama Queens are actually credible?

“Credible” can mean several different things. We’re talking about theater, and theater has always been able to take a certain amount of liberty with reality. Theater is about telling a story, and sometimes that can be allegory. It doesn’t always have to be reality television, thank God.

Some of these plots are really outlandish, as in “She really can’t tell that that’s the brother of so-and-so?” I understand why that can make some eyes roll. However, I have yet to come across an aria or opera where I haven’t been able to find the emotional truth of the character. And certainly, in the Baroque world of Drama Queens, they do sometimes exist in fantastical landscapes. Alcina is on her island, Octavia’s situation with Nero actually happened.

What interests me is the emotional truth of these journeys, arias, and characters. Sometimes the plot is given to outlandishness so these characters can be placed in truly extraordinary circumstances and emote in a way that is larger than life, which then allows the audience members to take that journey with them, as well. I don’t think half of opera would work as well if it were more realistic. If they’re always being realistic, why are they bothering singing?

Things are so intense and so exaggerated. Why does Romeo and Juliet need to be sung? For me, it’s because the emotions are boiling over in such a big way, sometimes in crazy situations. But then we get something like Keiser’s “Lasciami piangere”, when she’s going to offer herself as a human sacrifice. It’s a little outlandish, but it gives birth to this amazing moment of “please comfort me, Mom — I’m scared.”