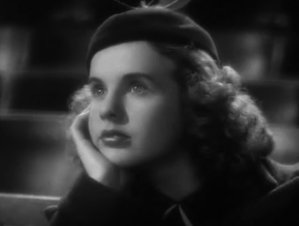 Yes, she is, in real life in France, where she turns 91 on Dec. 4, and on the silver screen in Stanford.

Deanna who, you ask?

As Stanford Theatre correctly advertises an unprecedented month-long festival of all her films, "she may be the biggest movie star you've never heard of."

One of the most popular singers and movie stars of the 1930s and 1940s, the Canadian actress was the Oprah of her day, the highest paid woman in the country in 1945 and 1947.

Then, in 1948, at the age of 28, she retired, moved to France with her family, and disappeared more completely from the public than Garbo herself. 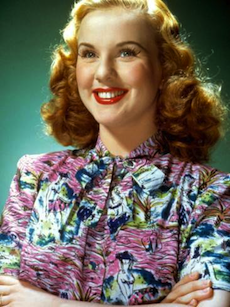 She had fans around the world, from Winston Churchill to Anne Frank, who had Durbin's picture on the wall of her now-famous attic room. One big fan is UC Santa Cruz's Fred Lieberman, who commented on my tribute to music in the movies:

Personally, I enjoy the half-dozen best from the most overlooked great star of the late-30s and 40s, Deanna Durbin. Her "Nessun Dorma" is lovely (go to YouTube) as is her "Un bel di" (ditto) and, and, and ... She was such a star at the time, top box office draw, that she saved Universal from bankruptcy; and her films are usually unpretentious and well-done, with good taste and direction, even if the rest of the cast couldn't match her.

I also admire her strength of character in turning her back on the Hollywood life-style, packing her bags and family at the height of her career and moving to Southern France, where she still lives today.

Unfortunately the timing was just a few years off — too early to be a nostalgic favorite of the Baby Boomers, and the accompanying lack of drama in her personal life means that there are very few DVDs and a rapidly vanishing cohort of VHS tapes of her body of work. I hope there's a Durbin archive somewhere ...

So now, Stanford Theatre, working with Universal Pictures, the UCLA Film Archive, the Library of Congress and the Academy Film Archive, has compiled all 21 of Durbin's films, "in sparkling 35mm," to present them in a festival beginning Saturday.