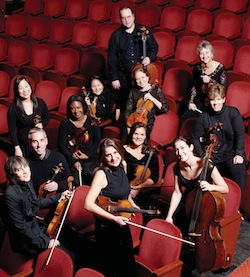 The New Century Chamber Orchestra’s concert on Dec. 12 at the Menlo-Atherton Center for the Performing Arts was bursting with soloists. Almost every member of the 20-strong string (and harpsichord continuo) ensemble had a turn.

The major work on the program was Vivaldi’s The Four Seasons — all four concertos and forty minutes of it — with each violinist in the ensemble, all 10 of them, firsts and seconds alike, getting a movement as soloist. Concertmaster and Music Director Nadja Salerno-Sonnenberg took two, the opening of Spring and the finale of Winter to frame the set, and there’s no solo part in one Adagio (in Autumn), which the tutti violins played with ghostly floating and drifting pitch, a modern reinvention of portamento. That left nine movements for everybody else. Each violinist stood up at her place (all 10 of them are women) to take her solo.

The most individual and distinctive spin on Vivaldi — after Salerno-Sonnenberg herself, than whom no more individualistic violinist exists, her half-nasal, half-swallowed delivery digging into the line as if etching it in stone — came from Candace Guirao, principal of the seconds, in the opening Allegro of Autumn. Guirao’s forceful double-stops, wide-ranging bowing, and warbling rubato made a striking contrast with Liza Zurlinden’s clean and harmonically sonorous double-stopping in the finale of the same concerto, during which Guirao made another witty contribution with wooden pops of her bow against the body of the instrument. Hrabba Atladottir also made a distinctive contribution with particularly elaborate appoggiaturas and aria-like decorative additions in the Spring Largo.

That still leaves room to note Dawn Harms’ resonating repeating and held notes, Jennifer Cho’s singing expressiveness, and especially Iris Stone’s warm, pleading caresses towards one end of the emotional spectrum, and Anna Presler’s strong, gruff tone, Karen Shinozaki Sor’s rattling delivery, and Robin Mayforth’s hearty sound and crisp turning of notes towards the other end of the spectrum. These styles need not be entirely personal, but could be influenced by the character of the movements played: Cho and Stone had the two remaining slow movements, for instance. And there were plenty of distinctive solo parts for principal cellist Susan Babini and acting principal violist Cassandra Lynne Richburg as well.

The variety of interpretations, plus the amusement value of watching the players pop up from various corners of the violin sections, made for a clever show.

Not all the solo work was technically impeccable, yet most of the playing was fine. The variety of interpretations, plus the amusement value of watching the players pop up from various corners of the violin sections, made for a clever show.

Regular NCCO composer Clarice Assad provided an equally clever show with a work cheekily titled Suite for Lower Strings, based on themes of Bach. The kick in the title lies in its dismissal of the upper strings, the violins, even though the full string orchestra played. Assad merely means that, in this work, the violas and cellos carry the bulk of those themes.

In her typically imaginative style, Assad has taken a dozen or so of Bach’s greatest hit tunes, from the opening of the Toccata in D Minor to “Jesu, Joy of Man’s Desiring,” and whirled them through a music processor. Some melodies are truncated and cut up, while others are spiced with dissonance in the manner of Peter Warlock’s Capriol Suite, and some are placed in playful counterpoint against each other. Much passing around of parts among the individual players allows me to point to violist Elisabeth Prior and cellist Robin Bonnell in the back rows as outstandingly strong, lyrical performers. The violins got an occasional descant accompaniment, notably a pizzicato rendering from the Well-Tempered Clavier. At one point, the cellos are running a theme from one of the unaccompanied cello suites, the violas play the “Air on the G String” over it as a counterpoint line, and the violins chip in with a fragment from a Brandenburg Concerto. Listeners who love their Bach but refuse to take him too seriously would enjoy this.

Sogno di Stabat Mater by the contemporary Russian-American composer Lera Auerbach does something similar with G.B. Pergolesi’s Stabat Mater, only in a more hallucinatory manner. Auerbach uses her source material in the manner of Alfred Schnittke, whose successor she is often considered. Passages of Pergolesi reminiscence floated in and out of focus, consonance decaying into buzzing dissonance, and alternating with original material written in Auerbach’s own usual idiom of raw expressionism.

The work is technically a concerto with three soloists. Salerno-Sonnenberg on violin and Jenny Douglass from the viola section were joined by percussionist Galen Lemmon, who’s been a guest at NCCO before, on vibraphone. The soloists dominated the performance, with the vibraphone particularly notable near the beginning and end, while the string orchestra got hardly a word to say.

The orchestra made more of a contribution in the curtain-raiser, Handel’s “Entrance of the Queen of Sheba” from Solomon, with Salerno-Sonnenberg and Guirao playing the oboe parts as a violin concertino section.

For an encore, to honor the Christmas season, the orchestra played a quite elaborate arrangement of “Have Yourself a Merry Little Christmas,” much sweeter-sounding than anything on the rather astringent main program, just to prove, I suppose, that they can play lushly if they want to.