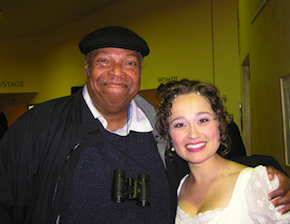 He spent 27 years as an instructor in UC Berkeley's Young Musicians Program, admired by colleagues and students. James Meredith, on the YMP faculty, met him three decades ago:

I met David in a practice room in Morrison Hall at UC Berkeley in 1981. I had just come to the Bay Area and we were introduced by a friend of mine who was studying voice with him. He was told by my friend that I was a good pianist who could sightread well. He said, "let's try you out!"

So he pulled out the Anthology of Art Songs by Black American Composers, plopped the volume in front of me and opened it to "Absolom" by Eugene Hancock. I played, he sang, was satisfied and we became friends and colleagues from then on.

He was a personality bigger than life, both physically and metaphorically. He loved his students, he loved singers and he loved singing. He was a very fine bass-baritone, well-known to the Bay Area musical community and beyond. He had a laugh and a passion that shook the room. He felt deeply about the talent in the African-American community that did not get recognized and supported. His life's work was trying to rectify that situation.

He had struggled with multiple medical issues in the last few years but had managed to pull through each of them. They did take a toll on his health. He has students around the world in the music business, both classical and jazz.

A gentle giant of a man, beloved of so many Bay Area singers whose lives he molded, passed away yesterday. His was not a name you'd see often in the press, but he was the rock behind so many. My daughter Kendra (Dodd) is quite inconsolable, and I'm having a rough day myself. He was the big beating heart of the voice students at YMP for ages, and much more besides.

Another message (name withheld): "A lovely man. Heart of gold. His students loved him. He had a lot of admirers, if Facebook is any indication."