School’s out, what now? Parents may be searching for cultural activities for their children in the days leading up to Christmas, or other holiday, and then through the end of the year. Well, you’re in luck. We’ve gathered some of the more interesting and accessible possibilities below. Though it’s a week without much classical music performance (save the continuing run of Nutcrackers), there’s still a lot to choose from.

7th Annual San Francisco Kwanzaa Celebration: commemorating the 150th Anniversary of the Emancipation Proclamation. In seven days, 14 events, all over the city, including a spiritual ceremony, a feast, live entertainment including rhythm and blues bands such as the Soul Mechanix and Bernard Ander & the Old School Band. Also, Emmit Powell & the Gospel Elite. If you’ve never experienced Kwanzaa, this is a great opportunity. One of the great feel-good community gatherings all year. 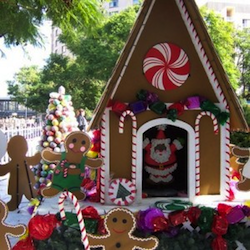 Christmas in the Park, San Jose: Two acres of winter wonderland at Plaza de Cesar Chavez, downtown, with lots of music and various exhibits and a huge Christmas tree. People come from all around the Bay Area. Runs through the end of the year.

Many programs for small children are closing or have closed for the holiday. However, one that’s still open through this Friday, in San Francisco, is Carmel Blue: a refuge, store, and ad hoc community center for moms and babies, fathers, lovers; the expecting and the unexpected. The brick and mortar is in North Beach. On Friday nights, the proprieter Sharone Nassi features something called Music Jiggle Jam, which is her version of “happy hour” for parents. A musician and educator named Michael Picard teaches rhythm, movement, and instrument play with songs, dance, and other activities. There are two 30-minute sessions: 4:30 to 5 p.m., for six to 18-month old children; 5:15 to 5:45 p.m., for all ages. Cost is $15 per class. “I just want parents to find some happiness,” says Nassi, “during a time that is often very stressful.”

Kids n’ Dance camps: If you’re still looking for something really excellent to occupy the kids during thewhole vacation week, try Kids n’ Dance studio which is running day camps for 3-5-year-olds and 6-10-year-olds. Camps include Princess Tales (for the younger set) and Dance Experience. Kids n’ Dance is a strong studio with excellent instructors and is very well reviewed. 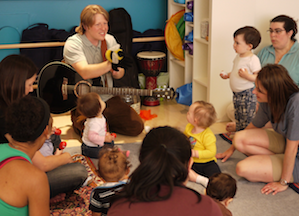 TheaterWorks at the Lucie Stern Theater in Palo Alto present Big River: a musical adaptation of Mark Twain’s The Adventures of Huckleberry Finn. Won the Tony Award for best musica in 1985. “Sure to delight the entire family.” Music and lyrics by Roger Miller. Directed by Robert Kelly. Through Dec 30. Two shows on Saturday and Sunday.

The White Snake, at the Berkeley Rep is a classic romance from Chinese legend. As she falls for a charming young man, a snake spirit discovers what it means to be human. But a monk objects, and the bride must unveil her magical powers to save their love. The production, written and directed by Mary Zimmerman, incorporates live music and has been has been extended through Dec. 30. Recommended for children 12 and up.

Singin’ in the Rain, in San Francisco, at the Castro Theater. On the big screen, Wednesday, Dec. 26, one day only, four shows, starting at 2:30 p.m. One of America’s great musical comedies, starring Gene Kelly, Donald O’Connor, and Debbie Reynolds. It’s impossible to leave the theater not feeling happy and the title song forever in your head…

Sacramento Children’s Museum hosts a dance party every Friday and a sing-a-long every Saturday. Toddlers welcome.

Annual Holiday Animation Festival at the Exploratorium, McBean Theater. Not especially musical, but we love the Exploratorium, and this is a perfect program for kids of all ages. Short films utilize stop-motion and other animation techniques. Films include: White Out (2007, 3 min.) by Jeff Scher, which captures the magic of snow with skiers and skaters crossing a winter landscape to music by Shay Lynch; Western Spaghetti (2008, 2 min.) by PES, a stop-motion animation of a surprising cooking demonstration; Dalhia (2009, 3 min.) by Michael Langan, which creates a moving portrait of the bustle and permanence of a city; Mobile by Verena Fels (2010, 7 min.), which tells the simple story of distances two stuffed animals go to be together, even if it means turning their world upside down; and Fetch (2001, 5 min.), by Nina Paley, a funny exploration of space involving an animated dog chasing a ball to a lively soundtrack by Nik Phelps and The Sprocket Ensemble.

Noon Year’s Eve at the Bay Area Discovery Museum: Here’s an innovative idea for toddlers and young kids: celebrating New Year’s Eve at noon, when they can appreciate it, complete with a DJ spinning dance music, a ball drop, and (if you order them), party favors.