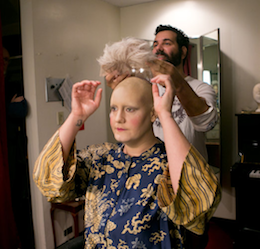 San Francisco Conservatory, Merola and Adler alumna Elza van den Heever, 33, made her Met debut on Monday as Queen Elizabeth I in Donizetti's Maria Stuarda. The queen wore a wig and the soprano decided to sacrifice her hair and go bald in order to make fitting the wig easier and the look more authentic.

"The title character in 'The Bald Soprano,' the absurdist Ionesco play, never shows up, but watch for her at the Metropolitan Opera," says Daniel J. Wakin in his New York Times feature about van den Heever going by way of G.I. Jane.

A Classical Review report Tuesday of the premiere calls DiDonato's "at the peak of vocal and interpretive resplendence," but lowered the boom on van den Heever, saying "Her voice has a sure, sometimes fiery upper extension that won her loud applause, but it is underpowered in its lower reaches, and the verbal mush she spewed contrasted unfavorably with the more trenchant singing of DiDonato and other cast members."

The New York Times review hailed both singers. Anthony Tommasini called DiDonato "a model of singing in which all components of the art form — technique, sound, color, nuance, diction — come together in service to expression and eloquence."

Of van den Heever, the review speaks of "a vocally burnished and emotionally tempestuous Elizabeth. Her sound, with its earthy tinge and quick vibrato, is not conventionally beautiful. But her voice has penetrating depth and character. She turns flights of coloratura passagework into bursts of jealousy and defiance."

Just as I suspected, the director comes in for the lion's share of responsibility/blame for Elizabeth's shenanigans. Martin Bernheimer, in The Financial Times, has high praise for DiDonato, but condemns the staging:

For most impractical purposes David McVicar has (mis)directed the piece as a quirky ode to a very odd couple. Although much of her music is elegant and even graceful, Queen Elizabeth I is made to stagger and swagger awkwardly about the stage. Faithfully enacted by Elza van den Heever, she lurches and struts, stumbles and smirks nonstop. Her vocalism, though generous and apparently fearless, tends to shrillness at the top and breathiness at the bottom. Pathos teeters on the brink of caricature.

By contrast, McVicar makes Mary Stuart seem even more of a saintly martyr than tradition might dictate. She personifies life-size modesty, sweetness and purity. Her gestures remain small, her agonies internal. Joyce DiDonato makes her plight all the more compelling because, unlike her royal adversary, she resists excess. Most important, she treats the complex bel-canto flights as emotional expressions, never merely as bravura filigree. This is an exquisitely proportioned, remarkably sensitive performance.