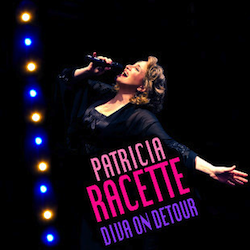 The answer is easy here because you see the photo, but if you received an unidentified MP3 from the album, you'd say Piaf or Cotillard. Shockingly, a world-famous mezzo and friend of Patricia Racette since her far-away Merola days said, apparently frustrated, "I don't have a clue!"

Patricia Racette: Diva on Detour, soon to be released, but already available for preorder, is both obvious and a big surprise. It reveals the soprano in all her vocal splendor, but in a repertoire wholly different from how we know her.

And, while she sings French chansons, Broadway hits, and cabaret standards, there is none of the awkwardness, the inappropriate sound of "stars of opera sing musicals," à la the 1998 West Side Story (Te Kanawa! Carreras! Troyanos! Horne!).

Produced by Glen Roven, with Craig Terry's occasional overloud piano accompaniment, this live recording places a defining Cio-Cio-San, Kát'a, Violetta, Jenufa, Emmeline for our times in a cabaret environment where she sings as if she never stopped perching on a barstool in a smoke-filled room.

It's not completely unexpected; an early stage of her career is clearly at play here for this alumna of the University of North Texas, where Racette originally enrolled to study jazz.

The result is well described in Bill Madison's blog:

[This is] a CD that exuberantly proclaims Racette’s mastery of an altogether different idiom. While she brings to bear certain assets of concert singing — particularly extended range and breath control that permits her to hold notes far longer than the average chantoozy — she gives herself over freely to the demands of the art form, exploiting a gutsy chest voice, alert attention to rhythm, and expressive devotion to language. She manages Billie Holiday’s trademark, singing on consonants, and she belts as if she was born to do nothing else.

Looking over the playlist of pop standards, almost all of which are associated with legendary stars of the past, you admire not only Racette’s good taste but also her courage. How the hell does any "diva on detour" open her act with a medley of Judy Garland numbers? Well, it takes her about less than two bars to dispel any doubts you may have, and once she’s got you in her grasp, she’s not letting you go.

Even in a set of Piaf numbers, she catches exactly the right style. She doesn’t imitate so much as invoke the Little Sparrow’s gargles and growls, her moans and roar, not to mention her flawless French diction. The only time she isn’t completely convincing is, paradoxically, a rendition of "La Vie en rose" delivered in what we will call her Opera Voice: though you can’t deny her emotional connection, the song becomes altogether too plummy. It’s nowhere near as bad as Renata Scotto’s legendary "Over the Rainbow," but nevertheless it’s a mistake she won’t make twice in the course of this album.