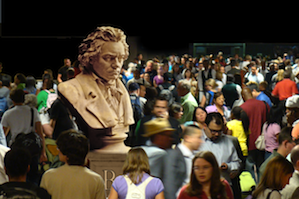 From chamber music in royal palaces to symphony and opera in large contemporary halls, music has always been a social function.

A large and growing local group is successfully combining internet social media and the natural proclivity of music fans to get together.

Classical Music Friends of the Bay Area is a branch of the international Meetup.com, which helps people find others who share their interest.

Meetup has more than 8 million members in 100 countries, involved in thousands of subjects and causes. A basic difference between it and other internet groups is the emphasis on regularly meeting face-to-face, not just online. 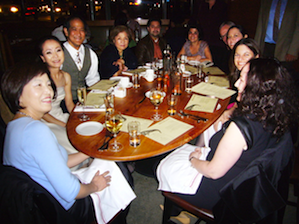 Erika Kim, an East Bay high school teacher, started Music Friends two years ago, and membership is now over 500. Activities include attending classical music events together, socializing before and sometimes after concerts; meeting once a month for a jam by members who are amateur musicians; and attending monthly seminars and discussions.

Examples of ongoing Music Friends discussion groups are music salons, run by music critic (and contributor to SFCV) Jeff Dunn, and lectures series, the current one on "The History of Western Music," by John Smalley, a musicologist, formerly a professor at Columbia University.

Dunn's salons generally fall in three rotating categories, all followed by discussions: viewing a biographical film or a video or film of an opera, and listening to several performances of the same work by different performers. The jams take place in a senior center in Berkeley, where residents also attend and even participate in music-making.

Kim says the group is "very dynamic in that you get to do just about anything that has to do with our classical music theme and friendship."

Another local meetup group focusing on classical music is Bay Area Classical Music Meetup, run by Robert Friedman, a concert producer. It has about 1,700 members, and it concentrates almost exclusively on attending concerts, many of which are produced by Friedman. Kim had been a co-organizer of Friedman's group, but she decided to start her own group so she could have greater flexibility of offerings.

Music Friends fees — charged in addition to admission prices to commercial events — are very modest: $3 per event or $24 a year, which allows attendance to all activities. Examples of activities: casual drop-in at the Revolution Café, 3248 22nd St., S.F. (8 p.m. every Monday in January), and the monthly concert/party/jam, Redwood Gardens, 2951 Derby St., Berkeley (4 p.m. Jan. 26).