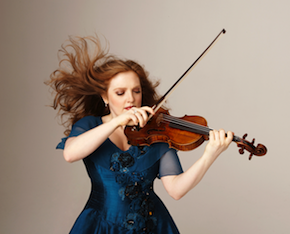 Her swath is, to use campus parlance, awesome. The “astonishing” violinist Rachel Barton Pine of Chicago is precisely that, and so consistently alive as to be fatiguing. Blink and you may miss something as she forays into her next recording or composer or community love affair. In Sacramento on Saturday she had pretty much everything going for her: the arresting presence onstage and off, a serious fan base after local appearances in 2010 (William Grant Still) and 2012 (all five Mozart concertos at the Mondavi Center in Davis), the cachet of what Wikipedia calls her “thrash/doom” metal band (Earthen Grave), and a darling little girl who sat with her to sign CDs well into the night — to say nothing of an emerald gown with sparkles that was pure Swan of Tuonela. And, of course, a life story made famous in the Chicago Tribune. She’s been pals with the conductor Michael Morgan since her stint as concertmaster of the Chicago Civic Orchestra in her teens.

I spent a pleasant several hours last week catching up with her work. It was good to think about Maud Powell again, and the Chevalier de Saint-Georges; lovers of The Story of Ferdinand (the bull) mustn’t miss the version with music. On YouTube she explains the what and why of her work, in sophisticated yet accessible lingo, both to master classes and in remarks from the stage as well as on the air. They kept her busy in Sacramento, where her contract included visiting public schools, going to the Children’s Hospital, and giving a benefit for the Chamber Music Society of Sacramento with Chausson’s Concert for Violin, Piano, and String Quartet, Op. 21. As it happened, I had an engagement at Davis High School just after she swept through. Eyes were still dancing, and the chorus of “amazing” to be heard from every quarter was, in its way, symphonic.

Her Sibelius Violin Concerto began deliciously, in the far distance: icy, portentous. Concertmaster Dan Flanagan, who also plays this concerto, oversaw a meticulous response to the often muddy pianissimo, con sordino textures that dominate the accompaniment. Barton Pine’s account made consistent sense, usually overcoming the several structural ambiguities of the work; the end of the big cadenza and the merge with the recapitulation in the first movement were high points of the evening. So, too, was the reemergence of the violin solo, in the second movement, after the surging string episode toward the beginning.

What seized my ears was the silver sheen of the upper registers, in this case consistently gentle and reassuring.

I spent long stretches of the concert trying to analyze the secrets of Barton Pine’s bowing technique and the splendid sounds emanating from the famous violin, a 1742 Guarneri del Gesù. Instruments of that provenance are valued especially for their dark, complex sonorities, entirely fitting for the Sibelius concerto. But what seized my ears was the silver sheen of the upper registers, in this case consistently gentle and reassuring.

If we were to talk it over, I’d ask the artist why she doesn’t think the great sentimental outbursts in the first movement, Largamente — the best of the concerto’s many fine tunes — include the figure just before as an upbeat; both times the 32nd-note rest seemed, instead, some kind of caesura. And I’d ask whether there’s any way to smooth out the last three pages of the score, where Sibelius so suddenly decides he’s done.

The encore was her own Tango-Étude No. 3, after Piazzolla, a track from her recent album Capricho Latino (Cedille, that wonderful Chicago-based label, 2011).

Teasing vs. Crossing Over

I couldn’t avoid thinking, in the first half, about the concept of “crossover” — or, to use faculty prose, “boundaries deconstructed.” Barton Pine has repeatedly noted, as she did in Sacramento, her discomfort with the term, but then usually goes right on to describe the jamming and the metal as teasers to bring followers to a symphony hall. Nolan Gasser, a Petaluma-based composer of the concert opener, Sonoma Overture, has been crossing boundaries most of his life. His self-portrait emphasizes humble beginnings as a food-court pianist, composition study in Fontainebleau (with Betsy Jolas), and a Ph.D. in musicology from Stanford with a dissertation on the motets of the Renaissance composer-theorist Gaffurius. Subsequently, he became involved in the “Music Genome Project” at Pandora, where he presently holds the title, doubtless unique in all the world, of “Chief Musicologist emeritus.”

I found Sonoma Overture … long, diffuse, and yet too obvious. Crossing over comes with risks and perils attached.

Sonoma Overture was composed for the Santa Rosa Symphony’s inaugural concert in Weill Hall at Sonoma State last September (see Robert Commanday’s review, Sept. 30, 2012). It is of a type: the commemorative overture, as in Beethoven’s Consecration of the House, also 10 minutes long, composed for a similar celebration in 1822. Gasser’s stated ambition for his work is awfully grand: “I wanted to forge a style that directly communicates with people who love music,” he said. “For me, that’s the guiding aesthetic. It needs to speak to people of my time.” What results is a straightforward sectional narrative, articulated by chime strokes at the major turning points. The scrambling string passagework at the beginning, for instance, is said in the notes and press to suggest “the dynamic rhythm of the growing [Sonoma County] region.” Then come the redwood forests and, finally, the vineyards — this last with splendid licks for soprano saxophone. I found the work (much like Consecration of the House, as a matter of fact) long, diffuse, and yet too obvious. Crossing over comes with risks and perils attached.

The Brahms was noble, sweeping, comfortingly familiar yet full of eyebrow-raising Michael Morganisms, such as grand rubatos in uncustomary spots. He quite pegged, from bar 1, the necessary leisurely tempo for the first movement, so often bungled there at the start as musicians and conductor seek accommodation. The violin sections, not thus far heard to particular advantage, took quick and impressive hegemony over the work. From where I sat, the smallish orchestra seemed impoverished by at least a pair of violas and another of cellos, though the superbly rendered codetta themes in the second movement momentarily challenged that notion. The triangle player, sitting alone on the opposite side of the orchestra from the timpanist, managed in the third movement an effect I don’t recall ever hearing, the pianissimo so soft that it sounded almost like a string harmonic. Horn-and-trombone in the great passacaglia were very fine, and more successful in registration than is often the case. I enjoyed every note.

It was good to be in downtown Sacramento of a Saturday night, in the company of something like 2,000 others — prevailingly white-haired, it must be said, but with impressive knots of young people to be seen here and there, plus a not-inconsequential splash of 30- and 40-somethings — focused on genuinely beautiful things and distracted for two hours from the tiresome, city-defining saga of the basketball team and its woes. But with that thought came a succession of less-happy musings on arenas and concert venues. For one, how muddy the Convention Center Auditorium sounds by comparison with what is becoming the NoCal norm.

An anecdote: When the distinguished but irascible Davis composer Richard Swift (1927–2003) would spot someone coming onstage toward a microphone before the downbeat of a concert, he would cause a kerfuffle, sometimes followed by a grand departure — believing that we had paid to hear the music and that was all that mattered. The Sacramento orchestra and its predecessors, and far too many others, have a tradition of starting with remarks from management, mostly thanking the sponsors and describing what we can and should already know from the printed matter in our hands. Delay of game, I say, and a practice that inevitably dulls the thrill of the opening notes.

D. Kern Holoman D. Kern Holoman is Distinguished Professor of Music at UC Davis and conductor emeritus of the UC Davis Symphony Orchestra. His most recent books are Charles Munch and The Orchestra: A Very Short Introduction (both published by Oxford UP, 2012).