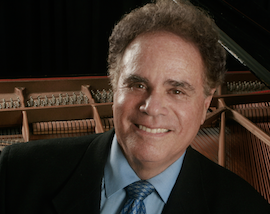 In the Q&A session following Jeffrey Siegel’s piano recital Saturday at the Montalvo Arts Center in Saratoga, several audience members mentioned warm memories of having heard him decades ago. Siegel has, in fact, been holding what he calls “Keyboard Conversations” since the late 1960s, when it was much less common than it is today for performers at serious classical programs to speak to the audience before performing.

Siegel’s practice is to introduce each piece that he plays. When most of the pieces are short, as they were on this occasion, it results in a program that’s close to close to half spoken. At least the audience knows what to expect, the introductions are often succinct, and the music is played in full. Saturday’s program was titled “Gershwin and Friends.” It took the form of a potpourri of light classics of the American piano repertoire extending over the century from Louis Moreau Gottschalk (1829–1869) to Leonard Bernstein.

Bernstein’s is an appropriate name to bring up, because his televised educational programs of the 1950s and ’60s were Siegel’s acknowledged inspiration for this program format. Siegel might be pleased to know that he sounds rather like Bernstein — a practiced and rehearsed speaker in a similarly clear, cultivated baritone, albeit with a Midwestern accent. However, the style of his presentation is different. Siegel eschews the educational side of Bernstein’s mission. His talk is focused purely on enabling aesthetic enjoyment. He outlines explicit programs, playing brief excerpts to locate landmarks — particularly useful here in describing Agnes de Mille’s ballet scenario for Copland’s Rodeo, before playing that composer’s piano arrangement of the “Hoe-Down” — and recounts the works’ origins.

He particularly relishes stories of composers almost discarding their masterpieces, in this case Edward MacDowell’s To a Wild Rose. Biographical detail is largely omitted, since Siegel wants listeners to enjoy the music, not to psychoanalyze the composer, and he keeps technical matters to a minimum. Whenever he used the word “counterpoint” (which came up regarding Gottschalk’s Civil War–era fantasia on patriotic tunes, The Union), he always translated it as “in duet.” Rather than explain what syncopation is, he demonstrated its value to Gershwin’s “I Got Rhythm” (the composer’s piano arrangement from the Gershwin Songbook) by playing a bit of what the song would sound like without syncopation.

Nor was this a historical survey. The works were not presented in chronological order. There was no discussion of the development of styles, nor, despite the “and friends” in the program’s title, of relationships among the composers.

Siegel plays much of his repertoire in a smooth, even-toned manner that reminds me of Earl Wild, an underrated pianist, though the effect was modified greatly by the exposing, up-close acoustics of Montalvo’s tiny Carriage House Theatre. As an old-fashioned pianist in his approach to music appreciation, Siegel is also old-fashioned in his performing style. He rates the charm and flavor of the music far above technical display. In that spirit, not-infrequent wrong notes were brushed aside; never, though, did the music lack consideration or energy.

One of the treats of the program was the obscurity of much of the music.

Siegel is conscientious about bringing out lines and patterns by selective emphasis of notes. He employed this technique to particularly winning effect in Scott Joplin’s Wall Street Rag. Of all the works on the program, Siegel seemed to enjoy playing this the most, with Gershwin’s close behind: an obscure early rag, Rialto Ripples, and a heroic rendition of the piano solo version of Rhapsody in Blue (the only work on the program longer than five minutes). In Siegel’s preliminary remarks for the latter piece, he argued for its structural unity by demonstrating Gershwin’s use of thematic transformation.

Siegel’s tempos are fast and generally steady. He played MacDowell’s To a Wild Rose briskly, without a trace of rubato or sentimental emphasis. The only piece that suffered slightly from speed — though Siegel insisted he was playing it slower than many conductors take it — was Copland’s “Hoe-Down.” Alas, the tripping rhythms could not always quite keep up with the quick tempo, and Siegel inserted frequent brief pauses between phrases. Copland’s early pictorial piece The Cat and the Mouse received more benefit from a similarly galumphing approach.

One of the treats of the program was the obscurity of much of the music. Joplin was not a prolific composer, yet his Wall Street Rag — which depicts the brokers steadily feeling cheerier as the market goes up — was new to me, as were Gottschalk’s The Union and Gershwin’s Rialto Ripples. During the Q&A, Siegel offered as an encore a brief, unpublished Gershwin melody titled Sleepless Night. The Bernstein offerings consisted of one of his occasional “Anniversary” piano pieces, For Felicia Montealegre (his future wife), and another such piece so obscure it doesn’t feature on the list of compositions at the official Bernstein website: Meditation on a Wedding, a slow melody over a repeating drone.