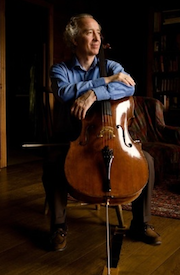 Monday’s Faculty Concert at the San Francisco Conservatory of Music on Monday was a revelation, giving listeners a glimpse of the transformation of music performance in the 19th century. Musical exemplars on display were Mendelssohn’s Quintet No. 1, Op. 18, composed in 1826, and Brahms Quintet No. 2, Op. 111, published in 1890.

Today, we hear performances of music composed centuries ago, but in a relatively modern environment (especially in relatively new cities such as San Francisco), with relatively modern instruments, by modern players. Even if a particular string instrument was made in the late 17th century by Antonio Stradivarius, these days it’s typically strung with modern strings made of steel or synthetic materials and played using the modern bowing technique in order to project the sound into the larger halls of today.

Of course, music lovers in the Bay Area live in the epicenter of the “historically informed performance,” particularly of the Baroque period. Local organizations such as the San Francisco Early Music Society and the University Baroque Ensemble often present concerts on period instruments, so we have frequent opportunities to hear the sound that Monteverdi or Bach may have heard. Yet it’s still rare that we would hear such an informed performance of the 19th-century Romantic period repertoire.

That is hardly surprising, as the industrial revolution in the 19th century made new materials and new tools available, and many musical instruments went through dramatic transformations during that era. In addition, urbanization resulted in turning music into a form of mass entertainment. The halls became larger, and star artists such as Paganini and Liszt toured around Europe on railways. It was a huge paradigm shift.

At the Conservatory on Monday, before the performance began, cellist Jean-Michel Fonteneau announced that the players were using gut strings that were typical in the 19th century. In addition, instead of the forceful modern bowing technique for projection, they would use an older bowing technique that produces lighter pressure on the strings.

The warmth and the depth of the sound, quite different from the modern timbre, were evident.

From the first measure of the Mendelssohn quintet, the warmth and the depth of the sound, quite different from the modern timbre, were evident. With the strings under a great deal less tension than modern strings, instruments can vibrate more freely, Fonteneau explained later, producing a warmer, more resonant sound. In addition, colors of the five instruments on stage were more cohesive, blending those instruments and performers into a more uniform voice.

The cohesive sound was most evident in the first measure of the second movement, Intermezzo. It opens in unison, but it then blossoms into a beautiful harmony as each of the five instruments acquired its respective voice. It made for a magical moment.

However, the gut strings, combined with lighter bow pressure, meant that the instruments do not respond as quickly as modern strings do with the modern bowing technique that places much stress on the instrument. As a result, the scherzo movement was vague at times, perhaps also as a result of the hall’s acoustics. I may have wished for a more relaxed, lighthearted tempo, as well as for more distinct colors from each of the instruments, given the work’s nod to the Baroque period.

It was the ensemble’s intentions and unified determination that made the entire concert so convincing.

After the intermission, the players fast-forwarded the clock by 60 years, landing the audience in the world of Brahms. Here, the ensemble took on a completely different character, making me wonder if they were using different instruments (they were not.) The broad strokes of rich colors were vivid, and emotions swelled like the ocean. Yet, in calm passages, a sweet and perhaps perfumed warmth filled the air. The performance did not possess the aggressive “bite” to which we have become accustomed, but it did make for more subtle, nuanced interpretation: Fonteneau’s cello had resonant and elastic pizzicatos, while Strauss’ solo lines soared, not like a rocket, but like a dove. The Allegretto movement was infused with a haunting character, and the jubilant final movement was filled with exuberance and boldly sculpted lines, often pitting the violas against the violins, with the cello as a referee. It created a pastoral, festive scene.

So, was this performance really made more “authentic” by the use of the period instruments and technique? Perhaps, but it was clear that it was the ensemble’s intentions and unified determination made the entire concert so convincing.