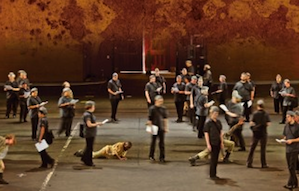 There’s an exciting, huge event on the horizon: April 26-28, the enterprising Volti Chamber Singers join forces with the San Francisco Choral Society, the Leah Stein Dance Company of Philadelphia, and the Piedmont East Bay Children’s Choir to present David Lang’s Battle Hymns. The piece, which includes writing from Sullivan Ballou, Stephen Foster, and Abraham Lincoln, had its premiere in an armory in Philadelphia in 2009.

It has not been performed since, owing largely to the demands it makes on would-be producers. Large forces,choreography and on top of that, a suitable space. Indeed, finding a home for the project in San Francisco was itself a project: Fort Mason was too big and stark; Fort Point, under the Golden Gate Bridge, was too noisy; Pier 70 has a concrete floor that doesn’t encourage dancing; Theater Artaud at Z Space was too small; the Presidio wouldn’t open buildings that might have been suitable. … All of which left Kezar gym, next to the stadium. It seats 4,000 but this production is designed for an expected audience of around 500.

But chorus master Robert Geary was not to be denied and he has communicated his enthusiasm to everyone involved.“It’s hard to convey the emotional impact of this,” says Barbara Heroux, executive director of Volti. “When I saw it in 2009, I was just blown away. It kills you. And then with the addition of kids it becomes even more powerful.”

A whole family is singing in the performance. Cynthia Adams, 48, is a teacher from the East Bay who has been with the Choral Society for five years. Although she didn’t study music in college she has participated in several community choruses over the years. Her children are in the Children’s Choir, one in middle school and one in high school. When the children heard about the project they begged their father to join the Choral Society so the whole family could sing the piece together, and he did. 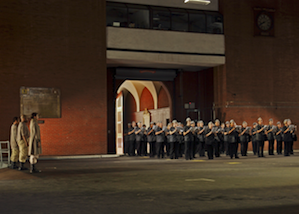 “The piece is really important to us as a way to think about war and its impact on society,” says Adams talking about her initial interest in the project. “Also Battle Hymns is just so different from standard choral repertoire. You think of a group of singers standing in rows on a stage with an orchestra in front, but this is completely different: The singers and dancers are moving throughout the space in a very choreographed way. The music is a cappella and it all comes together as a very moving reflection on the Civil War, and war in general.”

“One of the parts of this that I particularly like comes at the end. The particular music is called Beautiful Dreamer and you hear that as the singers, including members of the children’s choir, wander through the battlefield, among the wounded and dead. The battle has ended and they are observing, and perhaps reflecting on, the ramifications.

“As a performance, this is very engaging. There’s so much movement going on, there’s a lot to watch.”