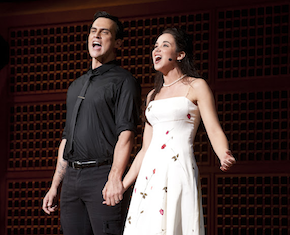 It’s hardly hyperbole to postulate that San Francisco Symphony’s first-ever complete concert version of West Side Story represents the first time since Bernstein’s death that his glorious music is presented as he might have wished. Not only does SFS’s groundbreaking rendition, which has four more performances in Davies Symphony Hall through July 2, allow us to hear Bernstein’s final 1984 revision of Sid Ramin and Irwin Kostal’s orchestration, played by a great orchestra that does it full justice, but it also presents the music in a far more satisfying manner than in Bernstein’s 1984 studio recording.

First of all, Bernstein’s Deutsche Grammophon recording is an early digital production, whose brightness and lack of warmth seriously detract from the score’s essential romance. One listen to Bernstein’s strings, even over a six-figure sound system, confirms that the silken sound of the San Francisco Symphony’s violins, and the warmth of its strings in their lower registers, is far more in keeping with Bernstein’s intent. Add to that the thrilling five-man percussion section assembled by Michael Tilson Thomas, our world-class brass, and the winning sweetness of concertmaster Alexander Barantschik’s brief but crucial solos, and you have an engaging orchestral tapestry the likes of which can only be realized in live performance. 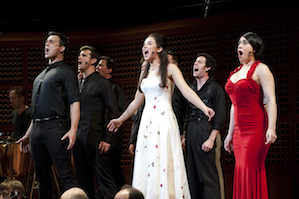 Then there are the singers. Not all of Jay Binder’s casting choices for San Francisco are ideal, but they sure beat what Bernstein’s operatic and linguistic mish-mash of José Carrerras’ Latin-sounding Tony (the Polish-American Anton) and Kiri Te Kanawa’s quasi-Puerto Rican Maria did to Stephen Sondheim’s lyrics.

True, we must do without the iconic choreography of Jerome Robbins and most of the dialogue by librettist Arthur Laurents that made what Bernstein called his “tragic musical comedy” a turning point in American musical theater. But while SFS’ performance may not be staged, the choice to place the amplified singers on a platform behind the orchestra, where they can interact, allows for some engaging body language that lends a tantalizing theatrical flavor to the proceedings. And so many of MTT’s musical choices are revelatory that it’s fair to call the performance a triumph.

Curiously, Cheyenne Jackson, whose availability to play Tony provided MTT with some of the impetus to push ahead with this project, is the weakest link in the cast. No one in their right mind would kick him out of bed, and he has a very sweet voice that is seductive in its own right, but he lacks the ultimate oomph essential to pushing his characterization over the top. SFS’s thrilling trumpets, trombones, and horns made a far greater impact than Jackson’s less-than-suspenseful “Something’s Coming.” In fact, on opening night, until microphone levels were adjusted, Alexandra Silber’s Maria ate him up on fortes in their initial “Meeting Scene.” 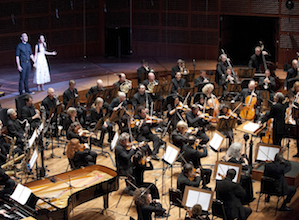 Ultimately, there was something too ordinary about Jackson’s vocal production and energy level. Nor was he helped, in his first crucial solo, by MTT’s choice to shortchange romance and zip through “Maria” faster than a subway train on steroids. Did Jackson’s technique necessitate such a fast tempo?

No such issues with the equally attractive Silber. Although either her headset or SFS’ speaker system constantly distorted her midrange, what could be heard clearly of her beautiful, clear soprano was a joy. Silber’s straight, pure high tones are certainly the envy of many an early music soprano, and her ability to add vibrato at the end of phrases in idiomatic Broadway fashion was an additional asset. Much of her performance provided the heart that Jackson only hinted at.

It is unreliably rumored that red-clad Jessica Vosk’s Anita was so hot that the air conditioning had to be turned up in intermission. Hers is the role that helped put Chita Rivera (Broadway, 1957) and Rita Moreno (film, 1961) on the map, and she is absolutely up to the task. Vosk belts, gyrates, and throws voice, hips, and you know what around like nobody’s business. Her three compatriots (Juliana Hansen, Cassie Simone, and Louise Marie Cornillez) may have looked and sounded better than they moved, but that made Vosk’s portrayal all the more potent.

There were other major finds. Kevin Vortmann’s mean-visaged Riff, complete with a high climax in the “Jet Song” (“When you’re a Jet …”) that would have made Al Jolson proud, was near-ideal. Justin Keyes’ rendition of Action’s part in “Gee, Officer Krupke” was super, and Michael Taylor’s cop was lots of fun. Kelly Markgraf didn’t have much to sing as Bernardo, but his dark voice seemed tailor-made for the part. Other small roles were sung ably, and the select San Francisco Symphony choristers who stood in for the Jets, Sharks, and Girls appeared to have a ball with the opportunity to do more than stare into printed scores.

In 1984, the great Marilyn Horne sang “Somewhere” for Bernstein’s studio effort. Here, Juilliard student Julia Bullock, winner of the 2012 Young Concert Artists International Auditions, performed with equal beauty but far less of an operatic flavoring. I loved her. If Bullock does not rise to prominence in short order, and make it back the Bay Area real soon, something is very wrong in the world.

Bottom line. Not every tempo or singer was ideal, and no one can mine this score for nuance and detail better than Bernstein himself (abetted, on record, by multi-miking and post-production rebalancing). But the sound — the absolutely incredible sound — of the San Francisco Symphony, and the spirit that musicians, singers, and MTT brought to the evening made for the finest sounding West Side Story you are likely to hear. Even if tickets are sold out, it’s worth showing up at Davies in hopes of snaring one. It’s that good.