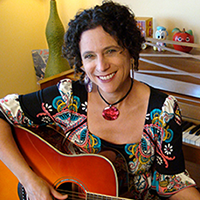 This Sunday, the place to be with your preschooler will be the Contemporary Jewish Museum. Singer-songwriter Alison Faith Levy and her Big Time Tot Rock band will be doing three shows, headlining the Yerba Buena Family Day Festival.

Of course, there will be plenty to do at the festival: At the Esplanade Stage in Yerba Buena Gardens, you can catch Lila Downs and her band in Mexican fiesta music with a contemporary twist, and there are two other outdoor stages, each with three-and-a-half hours of children’s entertainment. And the museums from SF MOMA to Museum of the African Diaspora to the Children’s Creativity Museum will have their own activities and exhibits for families.

But Levy is a local phenomenon, a veteran entertainer whose first solo CD, World of Wonder (2012) hits you with great songwriting and unexpectedly full production, which had rock critic Greil Marcus invoking Phil Spector’s “Wall of Sound.”

Rock for younger kids seems like such an obvious idea that, like so many great ideas, it’s almost surprising that someone had to think of it. And yet Levy has been a trailblazer on the tot rock scene. As she says, “When I first started doing it with the Sippy Cups, the band I was in before, it was a pretty novel idea. There really wasn’t anyone doing a rock and roll band for kids, and now there’s a lot of them.”

Like so many great family entertainers, Levy’s music can appeal to adults and older kids. Some of the songs, like “Detours”, operate on more than one level lyrically, and most of the songs feature sophisticated chord changes, Levy’s big voice, and a driving rhythm section. The band just rocks out.

“My goal is to write music that I like and I’m satisfied with,” says Levy. “I’m just trying to bridge that gap and make music that everyone will want to listen to. And there’s a little bit of a challenge in there for the listener and I think kids can handle that.

“I feel like sometimes when people decide to make kids’ music it’s almost a cop out, like ‘Well this is going to be easy; I’ll just throw three chords together and whatever.’ But I don’t see it that way. Writing a good song is writing a good song, no matter who you’re writing it for.”

If you can’t make Levy’s shows this Sunday, the good news is that the band is doing a gig a month this fall, and more bookings are surely on the way.

SFCVspoke with Levy briefly about her music and activities:

When you were putting the band together, what were you looking for in the musicians?

Well, when I started my solo project I was pretty much just doing it by myself. I was doing music classes and singalongs and things. And when it was time to make the record, I just started pulling in friends. The record label I’m on and the studio I record in has done a bunch of local bands. And some of those people, I just loved what they were doing, so I reached out and said ‘Hey, I know you don’t usually do kids music, but would you be interested in working on my record and doing a few shows with me.’ And then they all just stuck with me, and it’s become just a really good rock band. They all really enjoy it too, because they’re not normally kids’ musicians, but now they love it.

So they didn’t think they were going to love it but now they do?

Yeah, well as soon as they played the very first show and there’s like, you know, 150 kids jumping up and down going crazy — it’s like ‘Hey, this is way better than playing a rock club at midnight with 20 adults standing around bored with a beer in their hands. This is way more fun.’

Kids get so much more out of activities by being kinetically involved in them.

Exactly. It’s part of their learning. And now I teach a preschool class, so I’ve really learned a lot about kids’ learning patterns, and what helps them move forward as learners and the physical connection; and if you get them moving and dancing they’re gonna learn.

Have you been teaching in the local preschool or do you have a music program that you package? 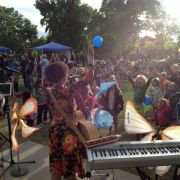 It’s just basically me and my music. And I’ve turned it into a curriculum, taking the songs with the movements and added instruments and scarves. And I’ve written a lot of other music activities involving rhythm sticks and shakers and different things. I teach at different schools, the Peninsula JCC and the San Francisco JCC — basically just go in there and teach in their preschool and play music and dance around with them. It’s pretty awesome: I love my job!

It’s all word-of-mouth. I started doing it at a local bookstore with my guitar, and that just got crazy-crowded, and then a local child development center asked me in, and then the word just got out and now I’m all over the place doing it. And I just keep building on my curriculum, just based on the music classes that I took when my son was little, and then things that I just learned from working with the kids. I just started back up at the SFJCC this week and, oh! – you walk into a room of three-year-olds, there’s nothing better.

You know, I’ve played music my whole life and I’ve played to many, many empty rooms. I know what that’s like; I’ve been through it all. So it’s nice at this point to actually do something that’s really connecting with people. And if those people are three feet tall or six feet tall, it doesn’t matter. They’re getting something out of it. And it’s really fun; I’m so lucky.

"I Love the Rain" at Marinwood. Video by Bill Hansell