A conductor explains the art of conducting.
By Thomas Busse ,

Concert audiences can hear the seemingly impossible sound of a singer, watch a pianist type out an incomprehensible profusion of tones, be moved by someone scrubbing on a very little box, or survive an evening where, in spite of the band’s best efforts, it all falls apart. Yet audiences are willing and eager to ascribe a concert’s overall success to a conductor — the one individual on stage who (we hope) produces no sound at all.

The silent gestures a conductor gives to a musical ensemble are perhaps the most misunderstood part of a music performance. When challenged to explain 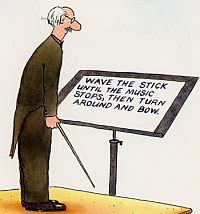 to nonmusicians what a conductor does on the podium and how he does it, I knew there was a trick to this riddle; I just didn’t see it.

The first part of this question is easy; look it up:

Conducting. Leading and coordinating a group of singers or instrumentalists in a musical performance or rehearsal. Conducting includes indicating the meter and tempo; signaling changes in tempo and dynamics; cueing entrances; adjusting balances; identifying performance errors and helping to resolve these; demanding clear articulation and enunciation; and, generally, bearing responsibility for the coherent interpretation of musical works. – The New Harvard Dictionary of Music

I confirmed this definition by surveying several respected local conductors and other musicians about conducting. All gave answers nearly identical to this one, though some respondents assumed a conductor leads an orchestra. That’s a reminder of the relative prestige of orchestral conducting over other ensembles.

Most respondents also assumed that a conductor leads by silent hand gestures, but this isn’t always the case. Historically, early orchestras were usually led by the concertmaster, much in the way chamber music is performed. Choirs used to appoint a singer to tap with a finger or roll of parchment on a stand in the choir stalls. Concertmasters can still lead smaller orchestras, communicating through movement and breath, while they perform chamber music. Parker Monroe, executive director of San Francisco’s excellent conductorless New Century Chamber Orchestra, remarks of NCCO’s rehearsals, “The process might be more efficient with a conductor, but certainly not better.”

Indicating the Meter and Tempo 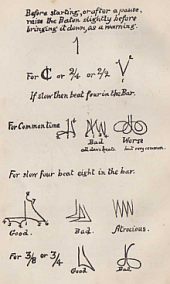 The only conducting rule is to indicate what should happen before it happens. When a conductor starts a piece at the right tempo with a simple gesture, it can seem like magic. In order to know when to do something, a musician must anticipate “when It will be.” The clearest way a conductor can start a piece in correct tempo is to raise and lower his hand against the force of gravity. The baton becomes a time ball that’s dropped.

A few years ago, at a Berkeley Symphony Orchestra concert, Kent Nagano conducted a new work for two violas; that is ... just two violas. As Nagano explained to the audience, sometimes musicians need a beat. This is especially true of thorny, contemporary music; it’s not surprising that many new-music chamber ensembles are led by conductors. There are essentially two types of new music; in one, the beat is slow and regular, and musicians come in between main beats before or ricochet a number of semibeats off the conductor’s beat. This music is secretly easy to conduct.

I would call the other type of new music “Stravinskian.” In this, the number of beats in a measure is constantly shifting, and it’s far too easy for a musician to get lost. Generally, players need to follow “conducting patterns.” Conductors described as clear, precise, and easy to follow usually excel in this music.

In repertory works with a regular pulse, once a conductor establishes a tempo, good instrumentalists will remember it. If the tempo is brisk, a large beat slows things down; consequently, a conductor’s gesture must become smaller. I have heard conductors compare standing in front of a good orchestra to riding a well-oiled machine. I recall a video of Claudio Abbado conducting the scherzo of Beethoven’s “Eroica” Symphony. At one point, without changing the size or shape of his beat, he moved his hand toward the violas. Suddenly I heard something I had never noticed before.

When a conductor shows confusing or inconsistent tempo, a good ensemble can adapt; though, on a wrong entrance, you might hear musicians mutter, “Who looked?”

Signaling Changes in Tempo and DynamicsImagine standing in front of an orchestra hopping along at a brisk pace. You’d be giving small, inactive beats. Suddenly, you need to slow it down. One way is to enlarge your beat to catch everyone’s attention and ease into the new tempo. All eyes focus on the unnatural antigravitational motion. (Again, the conducting rule is: You do it, then they do it.)

To speed up? Show a stylized version of “cm’on, cm’on, get over here!” To get louder, indicate “I can’t hear you!” To get softer, “Ssh.” Anthropologists claim basic human gestural language is universal — that is, independent of language and culture.

Cueing EntrancesMany concerts have few rehearsals, and players rely on conductors to guide them through a piece. Emil deCou, former principal pops conductor at the San 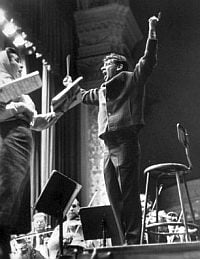 Francisco Symphony and former music director of the S.F. Ballet, describes his experience: “With ballet and pops, you have much less time to prepare. … Conducting the entire Wizard of Oz in perfect sync with the film is much more difficult than conducting Beethoven’s 8th Symphony, with a couple of shorter pieces thrown in. But you would get four rehearsals [for the former] as opposed to my one for the MGM score.”

A conductor also controls how an instrument enters the field of sound. Imagine thrusting a closed fist toward a horn player. Even if the music is angry and tortured, the horn will sound dull. A glance to the first row of violins or into the score is nothing compared to gazing out over the entire section.

Conductors find it important to breathe with musicians. Many an opera singer, in an uncomfortable costume and sweating under hot lights, has attempted a high note supported only by a sudden and cramped jerk.

Adjusting BalancesThe Bay Area is unique, in that many ensembles give consecutive concerts in several cities, often including Berkeley, San Francisco, Palo Alto, Walnut Creek, and San Rafael. One night’s venue may be acoustically “dry” while the previous night’s was excessively resonant. Each night a conductor may need to choose new tempos, cut off earlier or later, adjust to a new stage setup, and hush or bring out various performers on the fly. Demanding Clear Articulation and EnunciationA conductor’s gesture can cause musicians to make sounds they wouldn’t make otherwise; it takes no rehearsal time. Sharply whipping up the hand in short motions yields a short, detached (staccato) sound. The same gesture, but larger, creates a marching sound (marcato). Dragging the hand in a straight line can create a held, long sound (sostenuto).

This is yet another instance of the conducting rule: A gesture informs the music, rather than having the music inform it.

Guiding Coherent InterpretationIn science, the title of “doctor” is conferred by a competent scientific institution [on] those scholars who attain a required level of competence in this profession. ... Whereas in the domain of fine arts ... without a similar guarantee, all that is left to its bearers is but an unhealthy stimulation of his pride. – Igor Stravinsky, refusing an honorary doctorate from Harvard University None of the musicians I surveyed defined conducting in this way. When pondering this definition, I came to an understanding from a personal experience.

For several years, I was a serious student of conducting, and I had the opportunity to lead good ensembles. I attended conducting workshops in which 15 or so student conductors would rotate, each conducting an ensemble for 10 to 20 minutes. Panels of three experienced conductors would give American Idol–style feedback, often quite harsh. It’s difficult to have your mistakes aired in front of so many colleagues, especially in such a cutthroat career field. It's easy to forget that all conductors learn on the job. A catalogue of my own mistakes could fill 50 articles, and would be quite humorous.

On one occasion, I started a piece in tempo, the ensemble seemed balanced, and I thought all was going well as I took my first turn. Some 45 seconds later, everything stopped as a (famous) master conductor came up to me and exclaimed, “Oh, it’s all horrible, it’s all wrong, I don’t even know where to start.” He ended my turn by saying I was hopeless. Stunned, I sheepishly returned to the back of the room, edging my chair perhaps a bit further away from the other observers.

Every time I rotated in for the next six or so sessions, that conductor would leave the room. Another conductor on the panel never said a word. I was assigned to conduct Octandré, a thorny score by Edgard Varèse. All the students fretted about the piece in their hallway conversations, as it was quite different from the more conventional works. I nailed it.

Six months later, running another gauntlet on another coast, I found a more sympathetic panel. But my sessions were lackluster. On the last day, I attempted a fast, rhythmic piece by Bartók. It fell apart. A conductor, whose work I have since heard elsewhere and highly admire, walked up to me and remarked, “I have to say, you are the most musical person here ... and you showed that passage clearer than anyone. You just don’t connect!” He then stepped on the podium and led the movement, gloriously. It was the only time we had the chance to see one of the masters conduct.

Not all conductors have the type of tarmac-guiding technique that allowed me to dash off a work like Octandré. I owe my work to a very good teacher. Not all are the best at changing tempo, giving cues, showing articulation, managing balance, or even clearly showing a tempo. Yet the good ones somehow connect. The New York Philharmonic will always give a good performance under a last-minute replacement who signals the required cues and sets the tempos. Still, the replacement cannot claim responsibility for any coherence emerging from the performance without having forged that connection.

It’s possible to take music apart, to dissect it, to sift out its components and put it back together in the name of coherence, but, as I once heard a teenager ask in a preconcert lecture, “What does it mean?” Conductors are charged with this question. Not all gestures from a good conductor are successful; not all fulfill their purpose, yet the successful ones are somehow connected with the musicians. An audience can see when it has happened: Look into the musicians’ faces after a concert — look deeply — and you’ll know whether it happened.