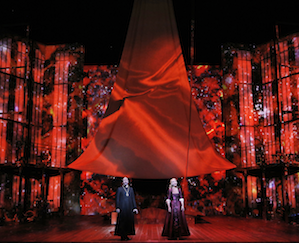 This is the fourth offering of the five-opera season this fall— following a sensational Mefistofele, the novelty of Dolores Claiborne, and the still-available Falstaff, which is simply for the ages. In the case of this production, alas, enthusiasm is not the first response.

On the plus side: Ian Robertson's Opera Chorus, with the men making their entrance as if channeling the ne plus ultra vocal blast heard in the Bayreuth Festspielhaus (in a specially constructed space that's perhaps one-third of the War Memorial in volume); Greer Grimsley in the title role; and Kristinn Sigmundsson as Daland.

Grimsley's voice is rich in colors, his projection is exemplary, and he enacts the cursed, woebegone Dutchman with believable authority. Sigmundsson, as usual, is powerful and reliable. The Act 1 duet between the two men is one of the highlights of the production. A.J. Glueckert's Steersman and Erin Johnson's Mary were fine, Ian Storey's Erik less so. 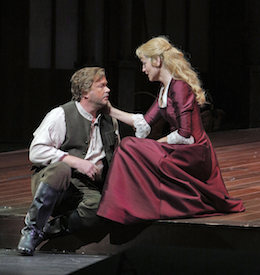 On paper, the headline of the evening was to be Lise Lindstrom's San Francisco Opera debut as the opera's heroine, Senta. In a storybook casting, when Petra Maria Schnitzer withdrew from the role earlier this month, the scene was set for "local singer makes good," to show off somebody who has become an international star without ever appearing with the home team. At the premiere, reality failed to provide the expected happy ending.

As Lindstrom began Senta's ballad, the voice was narrow, tentative, not at all the sound expected from somebody who sang Turandot 100 times. Clearly, she was indisposed. With great effort and discipline, she sang on in Act 3, where she becomes the pivotal character, and near the very end, the voice finally matched her famous ascending notes of great force — too little, too late. Her appearance and acting promise a better Senta by Saturday's second performance, but those expecting on the first night a dramatic soprano making her mark had to be disappointed, and feel bad about her missed opportunity.

Before turning to production values and the backstage drama about the production, let's address the most important factor in any Wagner performance, the orchestra.

The two basic requirements of conducting Wagner, as witnessed and acclaimed in this house with Donald Runnicles and others, are consistency and sustained tension that propels the music — and the audience — forward.

The two basic requirements of conducting Wagner are consistency and sustained tension that propels the music — and the audience — forward.

While the Opera Orchestra was at its usual fine form — with outstanding solos by oboist Mingjia Liu and violist Carla Maria Rodrigues, John Burgardt's timpani impressing with its evenness of dynamics and power — Patrick Summers' direction was inconsistent, arbitrary, at times lacking both in urgency, and in shaping the music right.

Summers, who has been well-regarded locally for many years, this time directed the orchestra to play too fast, too loud one minute, going into a steep ritardando the next, the (unwritten) plunge contradicting the very meaning of "gradually decreasing in tempo." Unlike Summers' usual consideration for singers, at the premiere, there were several instances of overwhelming voices — some of which might have been shared responsibility between the conductor and less than adequate vocal performances.

About the production, credit goes to S. Katy Tucker's projection design, with storms powerful enough to introduce seasickness. The large transparent panels on the sides (not Tucker's responsibility) served projections well, but they gave the impression of being in an aquarium — which, given the nature of this sea saga, may be all right, if confining. 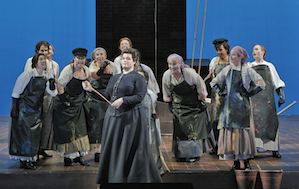 Of the direction and set design: When this co-production with Belgium's Opéra Royal de Wallonie first opened in Liege in 2011, it was a complete mess — murky, confused, over-reaching, and under-achieving.

SFO General Director David Gockley saw the live streaming — as did many of us — and said later he was tempted to change director and direction, but he didn't. So Petrika Ionesco — whose SFO Cyrano had an impressive design — remained in charge.

When he arrived in San Francisco, the Opera's internal coconut wireless began buzzing at a high frequency: He was reported to have been confused and confusing, things didn't make sense, there was trouble.

Finally, exactly a week before the premiere, the director was fired. There was no announcement, but at the premiere, Gockley made a statement in the press notes:

"It is true that I removed Petrika Ionesco from his role as director and scenic designer once the production arrived onstage, as it had become clear that the revisions we had been working on since the Liege premiere were not successful.

"Of the basic scenic pieces designed by Mr. Ionesco, 60% remain. The staging of principals has been considerably simplified, and the use of supernumeraries for various purposes has been virtually eliminated.

"Many of the projections in the production originated conceptually with Mr. Ionesco, but they have been expanded upon and refined by production design S. Katy Tucker working closely with me and the staff — most specifically with Assistant Director Elkhanah Pulitzer [she became the de facto stage director]. Our goal has been to tell the story of the opera clearly, theatrically, and musically."

A laudable goal, not completely achieved, which, under the circumstances, is understandable. The gist of the story comes across, but there are still confusing elements, and theatrical high points lack power. I, probably alone, appreciated the always challenging staging of the finale, showing the Dutchman's redemption through Senta's death. No spoiler here for what it is, but it is so much better than one of the past productions' joint Peter Pan-like ascension of the pair into upstage heaven.