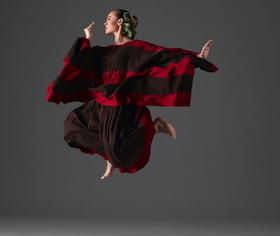 The last time the Martha Graham Dance Company played Zellerbach Hall, it was 1988. Graham was still alive; she died in 1991 at the age of 94.

In the 26 years since, the troupe has weathered a takeover attempt by Graham boon companion Ron Protas, regained its financial footing; and, via a superb artistic director, alumna Janet Eilber, has found and fostered dancers with strong Graham technique, style, and substance. The results were alive and juicy. That most UC Berkeley students had never had the chance to see the company made the show particularly exciting for this onlooker, and the audience Saturday night was warmly enthusiastic.

Though the repertory includes new works by modern choreographers, only Graham pieces came to Berkeley, because that was what the Berkeley Symphony wanted to play. The orchestra — conducted by the company’s Music Director Aaron Sherber — accompanied two works, Appalachian Spring (Aaron Copland) and Cave of the Heart (Samuel Barber). The third, the 1990 Maple Leaf Rag (who but Scott Joplin) featured pianist Marc Shapiro. 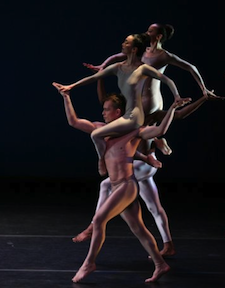 Appalachian Spring, Graham’s stunning 1944 encapsulation of the nation’s hopes and fears, was her contribution to the war effort, said Artistic Director Janet Eilber in a precurtain speech. Copland called the composition “Ballet for Martha”; it premiered at the Library of Congress. It’s lost none of its beauty; Isamu Noguchi’s iconic set is in itself a poem, from the rocking chair to the roofline.

The story is simple; Bride and Husbandman (Mariya Dashkina Maddux and Lloyd Mayor) arrive at their homestead, greeted by two extreme ideals; the Pioneering Woman (Natasha Diamond-Walker) and the Preacher (Lloyd Knight) as figures of realistic hope and religious fervor, respectively. Singly and together, the newlyweds dream and worry. They look from the fence rail to an uncertain future; she envisions a row of children, he a row of crops.

The Preacher, perhaps a tad too passionate in his emotiveness but a gorgeous dancer, draws blind obedience from his four female followers, their bonnets bobbing in humorous unison. The Pioneering Woman is a sort of religious ideal herself, with perfect balances and still, upreached hands, like a Russian Orthodox icon. It’s a great example of the art that caught Graham’s eye and how fluidly it became part of her dances. The Bride’s raft of uncertainties return after a blithe square dance; she rolls down a couple of stairs, then up them, a move audacious and fraught. You never know how this scenario, with its tranquil yet quivering ending, will turn out; you’re wanting the best, but not unaware that it may not go that way. It was very much a work of its time, and a work of today.

Noguchi also designed the set for the 1946 Cave of the Heart, the best representation on the program of classic Graham technique and casting, and her favorite subject matter, or so it often seemed, mythology. Jason (Tadej Brdnik) dumps the sorceress Medea (Miki Orihara), who has helped him get the Golden Fleece, for a newer model, the Princess, Creon’s Daughter (Charlotte Landrieu), lyrically pure-looking with her white toga and blonde hair. Against all warnings from the Chorus, mutely enacted by the commanding Carrie Ellmore-Tallitsch, Medea plots to kill the princess; she will also kill her own two children.

Orihara, in taut black gown, had direct contact with Graham, having joined the company in 1987. She is a stunning paragon of Graham’s extraordinary imaginings; it’s impossible to look away from those involutions of the torso, the almost involuntary rising of legs and arms, her evil vulnerability. Sorceress and victim, she hides behind a golden tree, which eventually engulfs her; we hear the scratching of its branches in obbligato to the Barber. Brdnik, with superb muscularity, sang-froid, and equipoise, is a classic exemplar of Graham jock; she must have had fun designing Jason’s trunks, which have a big red heart on the backside. 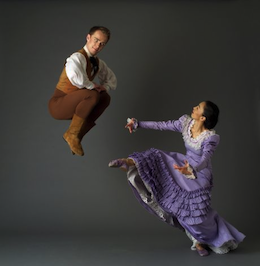 As Graham’s final ballet, Maple Leaf Rag has become a classic by default. When it premiered as sort of a gala-night goof, there was speculation that Graham, aging and ailing, had some assistance with the choreography. That notion appears to have fallen by the wayside, which is fine. It’s a pleasure to remember Graham’s wily powers of observation and wicked sense of humor, here precisely honed, in part because Sperber re-orchestrated the score.

The central prop is a joggling board Graham spotted in Charleston, S.C.; it teeters on rockers, sort of a wide and bendy balance beam. A parade of intense, sorrowing dancers in leotards floods the stage, performing all the miracles of Graham technique; contractions, extensions, kicks. Onto the joggling board plops the Graham stand-in, hair pulled back into a severe bun, and a recorded Martha voice says wearily to the onstage pianist, “Louie, play me the Maple Leaf Rag.” (Louie was Louis Horst, Graham’s longtime music director and lover.)

Things accelerate from there. As soon as the dancers hear the upbeat, the speed intensifies, jumping, hopping, burlesques, and high jinks, as it were, ensue. Repertory spotters have identified true Graham classics satirized here; the dancers foot-to-foot from Acrobats of God, the grabs and grimaces from Clytemnestra, the ecstatic clapping of the acolytes in Appalachian Spring, and, whenever things got really wacky, the exalted kick turns from the white-clad Graham solo Letter to the World, ending in a sobering yet giggle-worthy frozen pose. At its premiere, Maple Leaf Rag just seemed trivial; now, with Graham long gone but her company’s future looking bright, it’s become a wonderful farewell and hail.