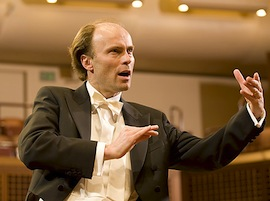 Robert Schumann felt that there was no better way to develop as a musician than by singing choral music. That statement resonated in the vast spaces of St. Mary’s Cathedral at the debut concert given by Capella SF on Saturday. That music for unaccompanied voices is still alive and well at 600 years of age was proven by Ragnar Bohlin, also director of the San Francisco Symphony Chorus, who has assembled a group of 24 outstanding professional singers who combine the virtues of chamber music with those of larger ensembles. Together they gave a captivated audience a rare opportunity to gain an overview into the history of Western polyphonic music from the 15th century through to the present day.

Bohlin began with a group of short pieces based on a lovely theme that Heinrich Issac used to express the sadness of leaving (his hometown?) Innsbruck, Austria. Centuries later, the melody he used was still inspiring the likes of Michael Praetorius, who made it into a farewell to this world (“O Welt ich muss dich lassen”) and J. S. Bach, who further expanded the religious overtones by including in the words the idea of sin and redemption.

As the works were performed by Cappella SF under the title Innsbruck Variations, it was made clear that the change from the secular to the religious is not as great as we might imagine and that musical meaning and expressive content can cross that border and still remain intact. Because they were grouped as a triptych, we gained a sense of the development of four-part harmony from music’s modal beginnings to the complex tonal language that culminated with Bach.

To round off the “early music” part of the program, we heard a six-part motet (I Am the True Vine) by Heinrich Schütz, which sounded even more modern than the Bach that it preceded by a century. I began thinking more in terms of wines than musical languages. I frankly was so captivated by the performances — above all, the beautiful sound and clear articulation of the parts — that I barely noticed the change from one composer to another. Music often looks backward and forward at the same time, as shown by Alban Berg’s reharmonization of the the Bach Chorale theme in his violin concerto, a 12-tone work that would seem to be totally alien to it.

I frankly was so captivated by the performances — above all, the beautiful sound and clear articulation of the parts — that I barely noticed the change from one composer to another.

Brahms composed a large body of a cappella music and even included the Isaac-Bach melody “O Welt ich muss dich Lassen” in his last work, the organ chorale preludes Op. 122, in which he says goodbye to music and earthly life while asking the question very much on his mind in his last years, “Whither music?”

His motet Warum ist das Licht gegeben might have been the piece that made a critic say of Brahms that he was in a good mood when he sings “The grave is my joy.” Each time the question “Warum?” (Why must we endure earthly suffering?) is articulated, first forte, and then like an echo, it seems to resonate from a place beyond the grave, timeless and with a beauty that can only be expressed by unaccompanied voices. The joyous conclusion of the work seemed to prepare us for the rebirth of music in the 20th century and beyond.

And a real lift-off it was! Five works composed within the last couple of years looked both backward and forward in fascinating ways. Leonardo Dreams of His Flying Machine, by Eric Whitacre, incorporated various “modern” percussion effects even as it harked back to the harmony of the Renaissance and the voices soared upward, depicting Leonardo’s obsession in a passage that really did feel like a jet airliner taking off. Continuing the flying motive, in a much more somber vein, David Conte’s moving O, Sun is an elegy for those who perished in the World Trade Center on 9/11. Its harmonies mirrored the simple yet powerful text by John Stirling Walker in ways that can’t be described in mere words. Music concerned with events of our own time either work or they don’t. In Cappella’s performance, O, Sun did succeed, and its final cadence summoned a warmth where, in the poet’s words, “grief becomes our grace.”

A group of world-class singers vocalizing under the direction of a fanatical yet inspired director with the vision and skill to show the world the unlimited power of human voices when joined together in harmony.

The famous prayer of St. Francis of Assisi (“Lord, make me an instrument of Your peace”) was similarly brought to new life in the premiere performance of a setting by the Swedish composer Fredrik Sixten, who has often turned to sacred texts in his work. At first I wondered how anyone could find a way to avoid musical cliché with words that are so well known. However, the genuine religious quality of Sixten’s music seemed to find expression even in the absurdly low tessitura of the basses and to convince me every bit as much as did the timelessness of the words.

Even more surprising was Mason Bates’ evocation of Jesus walking by the Sea of Galilee, taken from the Book of Matthew, drawn from a larger cycle, Sirens (2012), which was commissioned by Chanticleer. It had an undulating rhythm unlike anything I’ve heard sung by a chorus. It was conveyed by Bohlin and his ensemble with power and subtlety that made it a foregone conclusion that the fisherman who heard those words “Come follow me” would do so.

The concluding work, Mouyayuom, by Anders Hillborg for 16-part chorus, made a fitting closer to this varied yet supremely unified program. It used no words; rather, it sounded like a group of world-class singers vocalizing under the direction of a fanatical yet inspired director with the vision and skill to show the world the unlimited power of human voices when joined together in harmony, however strange and unfamiliar the sounds might be. Ragnar Bohlin has that vision, and Cappella SF has taken flight — and who knows where it will take us next?