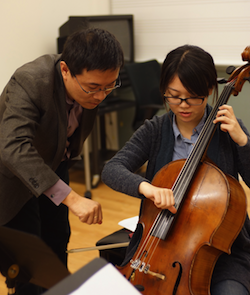 Rich as the Chinese and English languages are, I am stuck with German and the word that means (roughly) "the whole that's greater than the sum of its parts" to describe this week's 2014 San Francisco-Shanghai Chamber Music Festival. (The official title also includes the word "International," but isn't that superfluous, silly even?)

This is the fourth edition of the annual festival, which switches back and forth between the two cities, landing in San Francisco now for the second time. After three days of workshops, coaching, master classes, and rehearsals, there were two concerts, open to the public, on Thursday and Friday.

Obviously the joint participation of talented students and faculties in a festival is a good thing, but the praise for the gestalt of it is prompted by the the way the festival is programmed and assigned, mixing classics and new works, having one school perform a work from the other, the creative, judicious mix-and-match of it all.

Instead of one school strutting its stuff against the other, all was true "international cooperation" in every nook and cranny. 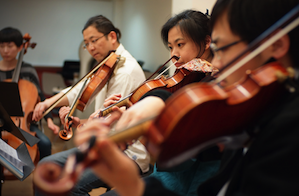 Originally initiated by a grant from the Cha Foundation of Hong Kong and sponsors from here, the festival this year unfolded under the leadership of Wei He, of the S.F. Conservatory’s violin faculty, and Jensen Lam, director of the Shanghai Conservatory’s chamber music program. The Shanghai delegation consisted of 13 administrators, faculty and students, including Vice President Xianping Zhang and Jiwu Li, director of the orchestral department.

Among the new works I heard — there were four world premieres — Garner's String Quartet No. 2 made the strongest impression. The Han Quartet, the improbably young-looking Shanghai faculty ensemble, gave it a splendid performance, coached by the composer himself. 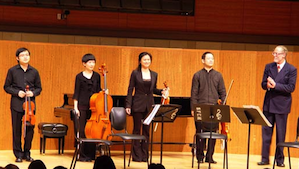 The four movements present a great variety in sound, but all reflect Garner's purpose of creating a synthesis of early 20th-century serial technique with present-day neo-tonality. Lest that sounds forbidding, be assured that effect of all the music is pleasant and easily accessible, Martinů meets John Adams — but thoroughly original material.

Violinists Weimin Zheng and Shuting Wu, violist Nian Liu, and cellist Dandi Wang (what a neat name!) met the work's demands effortlessly. The opening Vivace's speedy, percussive sound was especially appealing, while the second movement's "night music" was quite beautiful. The third movement is based on a Venezuelan waltz rhytm, and the fourth has an unequal meter, combining elements from the other movements. Bottom line: It's the kind of new music you want to hear again.

The second movement is named "Adagio ed Ondeggio Kanding Qingge," and it is an adagio with a quote from the "Love song of Kangding," a traditional folk song from Sichuan Province. Ondeggio is something between swinging, billowing, twisting, and the twist here, in the composer's words:

The embedding of the folksong is in homage to the spirit of the festival. I superimposed two trichords (three-pitch fragments) from the original 12-tone row to create the pentatonic tonality needed for the folksong. The serial writing is temporarily "suspended," an then subtly reintroduced by carefully "picking up" the row from where it left off before the song.

(If you want to hear Kanding Qingge performed by Placido Domingo in Chinese (yes!) and Song Zuying, accompanied by Lang Lang, take a look/listen.) 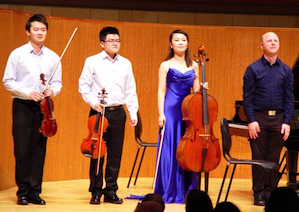 Lu's Recluse is a short work, channeling "lonely mountain, lonely cloud, lonely wind." It reminded me of the feeling — not the actual music — from the combination of Stravinsky's Concerto in D for String Orchestra and Jerome Robbins' ballet, The Cage, set on the concerto. A strictly personal response, I doubt it can be explained objectively.

Just to prove further that "international" is superfluous, another premiere was Kenji Oh's The Garden for String Trio, the Japanese-born/San Francisco resident composer's journey through an imaginary temple garden modeled on Kyoto's Ryoan-ji — performed by Yang Zhang, Yucheng Shi, and Menglu Li of the Shanghai Conservatory.

Shanghai Conservatory Composition Department Chair Guohui Ye's Old Melodies pays tribute to Tang dynasty music and, true to the spirit of the festival, it was performed by the American quartet of Bettina Mussumeli and Wei He (violins), Jodi Levitz (viola), and Patricia Ryan (cello).