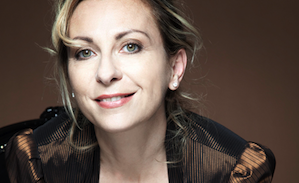 Is the glass half-full, or is it half-empty? In the case of soprano Natalie Dessay’s Saturday night concert in Davies Symphony Hall, that well-worn cliché boiled down to: “Do you mind that the vessel isn’t quite at full capacity?”

There were so many beautiful sounds, and so much sincerity throughout the evening that the desire to ignore the rest kept tugging at the heart. Yet the problems kept surfacing, and the mind kept deviating from the music due to imperfections in the sound. Foremost was a slight warble that would appear at the first touch of a note higher in the range. The warble would usually even out. But since Dessay’s chosen composers – Clara Schumann, Brahms, Duparc, Richard Strauss, Fauré, Poulenc, and Debussy – did not write capriciously, and reserved their high notes for musical and emotional emphasis and climax, the come and go warble was invariably unsettling.

Dessay seemed to address this concern by voicing many of her high notes softly. Soon a pattern emerged. No matter what the musical line or text demanded, she momentarily hit notes that approached or passed the top of the stave with a bit of force, then pulled back to a steady sliver of a sound. It was a lovely sound… at first, until the continual reliance on what seemed to be sonic first aid became cloying.

The over-reliance on soft highs first emerged in Brahms’ unsurpassingly beautiful “Geheimnis” (Secret), where a high note emerged as if plucked with effort rather than flowing organically from the musical line. Then, after the third cell phone disruption from the audience came the strange pulling back on the high notes of Duparc’s exquisite “Extase” (Ecstasy). It was easy to understand why Dessay did this, given that her “wu-wu-wu” warble disrupted the flow of emotion at the heart of this and many other songs. Nonetheless, the fix frequently failed to make musical sense.

This is not to say that there was not lovely and extremely artful singing throughout. You could only admire the artful hanges of dynamics and tempo in Schumann’s “Sie liebten sich beide” (They once loved each other), and the telling pause at the end of the first verse. Despite what seems to have been allergy-related coughing and tearing of the eyes several times at the beginning of the program, and the very occasional hint of hoarseness, Brahms’ “Lerchengesang” (Lark Song) seemed to speak to a special place in Dessay’s soul, and emerged as a precious gem. Equally lovely were the soft ending to Fauré’s justly prized “Clair de lune” (Moonlight), and the touching, virtually funereal emptiness Dessay brought to his “Prison” (Prison).

Nonetheless, the imperfections and inadequacies continued to emerge. Ironically, they were frequently highlighted by the marvelous pianism of Philippe Cassard. If, for example, Dessay failed to bring a light and carefree spirit to Strauss’ high-lying “Ich schwebe” (I float), her lack of angelic freshness was made all the more telling by Cassard’s effortless, feather down touch.

Similarly, she could not begin to equal the perfectly adorable tinkly sounds he brought to the end of “Wasserrose” (Water Lily), the hilarity of his playing in Poulenc’s “Il Vole” (He Flies), or his grandness in “Violin” (Violin). The impeccable waves of watery sound Collard produced at the conclusion of Duparc’s “L’Invitation au voyage” (Invitation to a Journey), which not only defied the piano’s percussive nature but also magically evoked the opium / hashish-induced haze at the core of Baudelaire’s poetic intoxication, were hardly matched by Dessay’s unmemorable interpretation.

By the end of the recital, momentary breaks in emission that were barely noticeable before had become more frequent. Nor had there been any lessening of the repeated swaying of body, waving of arms, and other histrionic gestures that seemed far more appropriate to an operatic heroine gone bonkers than to art song. But if one could make peace with all that, as well as with moderately muffled enunciation that, in both French and German, was a far cry from the verbal impeccability that distinguished the great French singers who worked with Fauré and Debussy and then trained their successors, one could only feel gratitude for the beauty that remains intact after more than two decades of performing.

Nowhere were Dessay’s gifts more apparent than in the final two songs by Debussy. The lovely sweetness at the start of “Fleurs” (Flowers), the easy transition between the extremely demanding, rapidly ascending and descending cascades of notes in “Apparition” (Apparition), and the gorgeous voicing of its final lines (which, in English, translate as “Always dropping from her carelessly closed hand / A snow of white bouquets of perfumed stars) served as fitting reminders that Dessay has long been one of the most cherished and creative coloratura sopranos on the operatic stage. If her wings are now somewhat clipped, she can still produce enough beauty to have left her photo-snapping audience clapping its way to three encores.