"I'm a Performer": Where Music is for Everyone 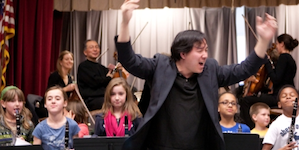 The San Francisco Girls Chorus joins the Berkeley Symphony for its annual “I’m a Performer” family concerts in Berkeley on April 12. The Saturday morning performances, at 10 a.m. and at 11:30 a.m., are free of charge and open to the public. Berkeley Symphony education director Ming Luke conducts the program that will feature Ludwig van Beethoven's Ode to Joy and the orchestra's signature tune, I Am a Fine Musician.

Musicians young and old are invited to play their instruments or sing with the chorus and and symphony. Concert goers can download and print out the program and sheet music for the performance. Some programs and sheet music will be provided at the concert.

The initial step consists of visits to East Bay grade schools by symphony musicians. Annually more than 200 such in-class sessions are provided free of charge. They include hands-on instruction and age-appropriate curriculum booklets that address state standards for music education.

The next step is the "Meet the Symphony" musical program in the fall when 11 such concerts are performed in elementary schools in addition to two family concerts open to the public.

Capping the music education trifecta is the "I'm a Performer" family concert in the spring. Six such concerts in the schools and two family concerts provide young musicians with the opportunity to rehearse and play with the Berkeley Symphony.

"The family concerts benefit more than school children in the East Bay ... They bring the community together in a hands-on experience. The idea is to humanize who the musicians are." — Ming Luke

By the time April rolls around each year participating students have been through an instructive cycle, said Luke: "They've seen some musicians in the classroom, they've seen the symphony perform, now they get to perform with the musicians."

Luke said he draws tremendous satisfaction from leading the music education program. "It's those moments as an educator, when you have the potential to really connect with people, to hear how music has affected them. The important thing for me is that music should be for everybody."

Making music accessible to anyone who wants to listen is one of the Berkeley Symphony's goals, according to the orchestra's executive director Rene Mandel. "The family concerts benefit more than school children in the East Bay," he said, in a telephone interview. They bring the community together in a hands-on experience. The idea is to humanize who the musicians are."

The music education program, created by Luke's predecessor, Randy Porter, is envisioned to grow, according to Mandel. Expansion is planned into middle schools and neighboring communities, he said. Fund-raising to reach that goal has been strong thus far, said Mandel, a former violinist with the Berkeley Symphony.

"Elementary students can see that music is a path they can take ... People don't come out of the womb playing Paganini." — Ming Luke

"We raise most of the money for the entire music-in-the-schools program and concerts," he said, noting only 10 percent of funding for the symphony's music education program comes from foundations or corporate charitable gifts.

The impact of music on a young child is powerful, said Luke, who joined the Berkeley Symphony as its education director in 2006. His passion for music was ignited at age three while a guest at a wedding at which a string quartet played. He sat transfixed for two hours in front of the musicians. "At that point my parents knew they were in trouble," he said. Shortly thereafter Luke and his parents began piano lessons at the same time. At 8-years-old he began to study violin in public elementary school in New Jersey.

Music education in the schools, such as the experience he enjoyed as a child and the program the Berkeley Symphony has offered for nearly two decades, is important, said Luke.

"Elementary students can see that music is a path they can take," he said. "People don't come out of the womb playing Paganini."