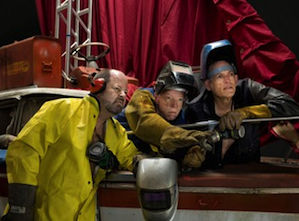 To get ready for Opera Parallèle's double-bill of Francis Poulenc’s Les mamelles de Tirésias (The breasts of Tirésias) and Kurt Weill’s Mahagonny Songspiel at Yerba Buena Center on April 25-27, my recommendation is to watch Lyon Opera's wonderful production of the Poulenc.

The Opera Parallèle production is conducted by Nicole Paiement, stage design and direction is by Brian Staufenbiel, whose twist on the presentation is to feature the same singer in major roles of both works. 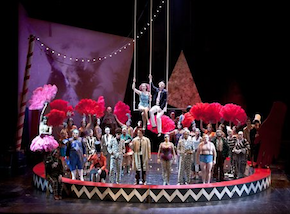 Rounding out the cast of Tirésias is baritone Hadleigh Adams portraying Le gendarme; choral parts will be sung by members of the Resound Ensemble of the San Francisco Girls Chorus.

The production is set in the future as a theater troupe sings Weill's songs. Then after crossing the desert in search for water, they come upon an audience for whom they perform Guillaume Apollinaire's set to music by Poulenc. It is a wild tale of a woman who becomes a man and changes the submissive role of women in her world, as her husband overpopulates the world by giving birth to thousands of babies.