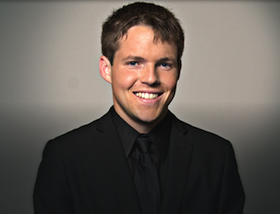 Chat with classically employed musicians who enjoy jazz, and you’ll soon realize that jazz is not like some illegal habit they sneak into some Civic Center alley to indulge in. They actually view jazz as a vital artistic form, and as a practice that enriches their classical chops.

Take Jacob Nissly and Scott Pingel, the respective principals of percussion and double bass for the San Francisco Symphony (SFS), both of whom have landed gigs this month at the SFJAZZ Center, a couple of blocks from their Davies Symphony Hall base. It’s not as much of a stretch as some might think.

“Why would you not want to pick up a skill set to make yourself more employable?” asks Nissly rhetorically. “The way it’s been institutionalized, you’re either studying orchestral percussion, or you’re studying jazz drum set.” Nissly managed both, securing a degree at the Juilliard School while also playing jazz in the clubs of New York City. Auditioning for the SFS, he didn’t encounter a drum set, “but there was an excerpt from West Side Story, from ‘Cool,’ where there’s a little vibraphone thing. It’s written [by Leonard Bernstein] to imitate jazz. And after, I got comments from a number of people on the committee that it was nice to hear it played in the vernacular, like a jazz player would play it.” After being chosen as principal here, having served in the same role in Detroit and Cleveland, Nissly found himself impressed by SFS Music Director Michael Tilson-Thomas’ “knowledge of percussion, and his desire for it to not just be relegated to a role of color. This is an orchestra that swings!” 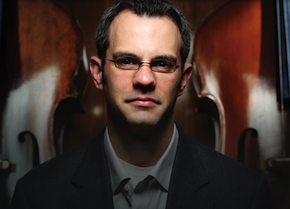 Pingel followed a parallel path, having pursued classical repertoire and bass technique at the Manhattan School of Music, but also gigging at local jazz clubs and even touring Scandinavia with a pickup jazz big band, behind the New York Voices vocal quartet. “Little did I know that studying classical music the way I did would open my eyes to things I didn’t realize previously,” he says. “And it just became so attractive to me — how Mozart would select every last note in a special way. Maybe some of the chords were not as dense [as in jazz], but there was incredible beauty and sophistication.”

In fact, neither principal had started life with classical aspirations. Nissly grew up in Iowa with the pop and jazz record collection and drum set of his father, Daniel, who’d earlier played in rock bands opening for the likes of Santana and ZZ Top. “My school didn’t have an orchestra,” the younger Nissly points out, “and I wanted to play the drum set and be in the marching band.” He also joined a jazz band in the sixth grade.

Later, Nissly left his small town for Dowling Catholic High School in Des Moines, “where they had an amazing jazz band and band director, and were known for percussion. But without that school, the classical side probably wouldn’t have developed, because my peers in that school were in the youth orchestra. Also, my first teacher said he wouldn’t teach me anymore unless I learned how to read music and played mallets. Then my parents bought me a marimba, which was kind of huge.”

Pingel, for his part, was raised in Wisconsin and picked up electric bass at age 15, two years before he took up acoustic. He points to Jaco Pastorius, and that electric bass pioneer’s performance of the tune “Birdland,” with the early jazz fusion group Weather Report, as his summons to take up the instrument. “But there were also Marcus Miller and Stanley Clarke, and my learning their licks,” says Pingel. “And once I started playing upright [acoustic bass], Ray Brown was it: He was a big-time groove player, very thoughtful and tasteful.”

When Nissly went on to Northwestern University, it was to study economics and to transition to law school, though he maintained a second major in classical music. In his sophomore year, he dropped economics and switched into the jazz department, still “fully supported by my classical teachers.” Beyond the classroom, “a lot of the music education I got in college,” he comments, “was from my friends who were not music majors, who were just listening to other stuff that I probably would not have come across.”

“I don’t think percussion, in the classical sense, should be seen as that much different than what we do in jazz. And I guess that’s my whole thing I try to teach.” –Jacob Nissly

“In undergrad, my lessons at the University of Wisconsin in Eau Claire were classical,” Pingel points out. “But my focus was very much in the jazz program, although they didn’t offer a jazz major. And that was part of the philosophy of the jazz professor there: He felt it was more important that you learn how to play your instrument, and learn the technique very specifically in its historical context, so then you can learn a lot of different ‘languages.’ And jazz is one.

“You can go off from there and specialize, and that’s sort of what happened to me,” notes the bassist. “I had the basic foundation on the instrument, and [jazz guitarist] Geoff Keezer kept telling me, ‘You gotta come to New York!’ So I said, ‘I’m coming, but I’m gonna be in school, studying classical stuff all day; how do you feel about that?’ And he said, ‘It sure beats the hell out of washing dishes all day, just so you can play jazz gigs at night.’”

For a few years, Pingel’s jazz predilection had to sit on the shelf while he bolstered his classical technique and study of styles, subbed with the Metropolitan Opera Orchestra, and joined the New World Symphony in Miami, under Tilson-Thomas. Another move, to the principal bass chair at the Charleston Symphony Orchestra, connected Pingel with local jazz drummer Quentin Baxter for a pops concert, and reactivated his love of jazz and electric bass, which he began deploying in Charleston clubs on his nights off. “There are so many things you can do with both hands,” he says about the electric instrument, “and now I wish I had more time for it.”

But along with Pingel’s hire by San Francisco in 2004 came a teaching job at the San Francisco Conservatory, and he and his cellist wife, Iris (whom he’d met at the Manhattan School), started a family, which now includes Hannah (age 7) and Sofia (1). So “I hardly do any gigs now, though Geoff Keezer and I did a collaboration at Old First Church.” And he sits in sympathetic company at the SFS, including stand partner Larry Epstein, a frequent guest at the legendary Sunday Doghouse Jams at the 7 Mile House, a genial restaurant hosting jazz and other musics on San Francisco’s Bayshore Boulevard. “We’ve been on tours, sometimes in Europe, where Larry and I will sit in with bands,” Pingel reveals.

“It just became so attractive to me — how Mozart would select every last note in a special way. Maybe some of the chords were not as dense [as in jazz], but there was incredible beauty and sophistication.” –Scott Pingel

The busy Pingel hasn’t made it to the 7 Mile House yet, but Nissly has. He got to man the drum set of veteran jam leader Vince Lateano, on a spirited rendition of Bronislau Kaper’s movie tune “Invitation.” Nissly found the local jazz scene more comfortable than the Big Apple’s. “In New York, it’s a lot of musicians playing for musicians, almost like it’s miniaudition time,” Nissly reports. “There’ll be complicated tunes, and it’s ‘You don’t know this? You’re an idiot!’ This feels better to me here, ’cause you can just do stuff. It’s very awesome.”

Nissly and Pingel will have even freer rein in their solo appearances at SFJAZZ’s Joe Henderson Lab this week and next, performing three short concerts apiece. The jazz institution had originally approached Epstein, who’d referred them to Pingel, who “didn’t know how I would find the time, but thought it would be a good challenge. Then they asked me if I knew anyone else who might be able to do this kind of thing, and I said, ‘You gotta get ahold of Jake [Nissly], ’cause I’ve heard him play a set, and he can seriously play.”

“I like all my students to be musicians with integrity who love sound, and love to share the beauty of sound with other people.” –Pingel

To meet this unusual challenge, Pingel turned to SFS Assistant Concertmaster Mark Volkert, who reworked a movement from a planned concerto. Pingel’s program will also include pieces by Emil Tabakov, based on Bulgarian folk tunes; a “very inventive piece which sounds almost improvised,” by Czech composer Miloslav Gajdos; some free improvisation; and Pingel’s genre-bending take on “Stella by Starlight,” written by Victor Young for the film The Uninvited (1944) and beloved as a jazz standard by everyone from Harry James to Charlie Parker to Miles Davis. “I’ve sort of done it in the vein of a Bach chaconne,” says the bassist.

Nissly assembled his own program “from the era when percussion music was coming to the forefront,” he notes. “I’m playing a piece called Tambourines, by Rupert Kettle, which shows off a lot of cool, different-sound things. There’s a section which is quasi-improvisatory, where I’m using a technique I don’t think anybody uses in the classical world, developed out of [Brazilian] pandeiro [a hand frame drum] technique. There’s a piece called Rebonds B, by a Greek who’s a trained architect, Iannis Xenakis; next year the Symphony will do a bigger work of his, with Steve Schick involved (he’s another Iowa boy).

“I’m playing two pieces on solo marimba,” Nissly continues. “There’s a short movement from Jacob Druckman (his son Danny was my teacher at Juilliard), based on the characteristics of water, which is both virtuosic and musically deep. The other piece was originally for harp, by John Cage, called In a Landscape, very lyrical and melodic. And I’ll do a sort of drum solo which ties into rudimental and into military-style snare drumming. To me, all this comes out of an era of composition that mirrors my favorite era in jazz: ’50s, ’60s, ’70s. I don’t think percussion, in the classical sense, should be seen as that much different than what we do in jazz. And I guess that’s my whole thing I try to teach.”

As a pedagogue, Pingel, too, channels his jazz experience. “I think part of it is the open-mindedness,” he avers. “I don’t demand that everybody become orchestral-based players, painting-by-number, learning their licks, and plugging their licks into a symphony to get a job somewhere. I don’t think that’s where the future of the music market is going. I like all my students to be musicians with integrity who love sound, and love to share the beauty of sound with other people.”

In July, Pingel and Nissly will appear in a San Francisco Symphony program titled “A Jazzy Night,” with colleague Mark Inouye (principal trumpet) and guest Makota Ozone on piano, performing in a jazz quartet configuration in front of the Symphony, under the baton of Director of Summer Concerts Edwin Outwater. “The orchestra’s my biggest job, but I’d love to play in a jazz group, and I’d love to make hip-hop beats,” says Nissly. “It’s so easy to cross over for us, it doesn’t make sense not to.”