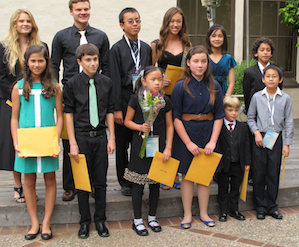 The other day we reached Nicholas Brady at his home in Monterey. He was just coming off a solo performance playing the first movement of Bach’s Concerto in A Minor at the Carmel Bach Festival. He played there last year as well.

Nicholas is everywhere these days. In May, he played at a Youth Music Monterey County concert. In July, Carmel. On Aug. 31, he will appear in a concert in Pacific Grove. In December, he’ll play a family holiday concert with the Monterey County Pops.

Wherever he plays he brings the audience to its feet. People cry when they see him. His passion is what stirs them. And yet, look at his face as he’s playing: The expression is utterly impassive. As though he has nothing to do with his music. As though even his vibrato is merely the genius of an invisible puppeteer. He evokes images of a gypsy ragamuffin playing his fiddle in the streets of Kiev; or else, standing next to the conductor, in his tuxedo and vest, he’s the ‘little adult’ in a Victorian lithograph.

This was his sixth interview of the year. It was brief. Russian is his first language but he speaks perfect English. Nevertheless, he was hard to understand; it was a bad connection. For a moment, there was also some confusion whether this was another radio interview.

His answers were laconic. But then some of the questions were stupid. The Bach piece is four minutes, we said, is that a long time or a short time?

“I think it’s not four minutes,” he replied. “I think it’s more like five minutes, but it feels like six or 10.”

We took that as admonishment. But was it hard or easy, we persisted.

He often answered questions saying “yep” or “nope,” like some farmer’s son on a dust bowl veranda.

And at the end, when everyone is clapping, that must be quite something?

And one more foolish question: “Why do you like the violin?”

He has two younger siblings; another is on the way. And then there are two other stepchildren in the family. His father is a banker, although between banks at the moment.

His mother is completely dazzled. It’s all a mystery. Her son has been doing this for a year and a half and people insist he’s a prodigy. How else to explain it? “I don’t think he is,” she told us. “He’s just had a wonderful teacher, and music and language have always come easily. But we’ll see.”

“I do know that he has something exceptional,” she added. “It’s a musical feeling; he’s soulful.”

His mother realized something was amiss when she used to take him to the farmer’s market. He was 3 and mesmerized by the musicians, totally absorbed. It was almost spooky. A few months later she got him his first fiddle. And now, at age 5, here he is in concert, making the people cry.

And a small-statured 5, his mother would add.

She has become an avid ‘stage mother,’ publicist and manager. But she’s not sure how much to push him. He’s practicing 30 minutes a day, and at some point soon he’ll have to double that, if this is it. And that’s the question, is this for real?

Of course she’s proud that Nicholas is the 2014 Junior Youth Orchestra Concerto Competition winner. And she still marvels that last year Carmel Bach Festival Artistic Director Paul Goodwin took Nicholas along a part of a talk at the annual Pebble Beach Authors and Ideas Festival. Not unlike TEDTalks. During his presentation, Goodwin was talking about how you have to start at a young age in order to become a really good musician. At that point, from behind the curtain emerged Nicholas with his violin and his impassive expression.