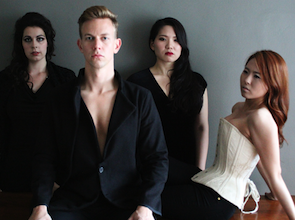 James Darrah (see item above) comes in a package he has been putting together, which he started during his UCLA school days: He is the founder-leader of Studio Chromatic, a group of young artists working on stage direction, design, lighting, and video produced in a creative collective. "One of the great advantages of structuring a production company," says Darrah, "is that we manage the problem that makes it hard to ascertain how to fit traditional billing for design elements — everything is so overlapped!"

The core of the flexible Studio Chromatic, headed by Darrah, is Adam Larsen (projection design), Cameron Jay Mock and Emily Anne MacDonald (scenic and lighting design), and Sarah Schuessler (costumes, usually in collaboration with Darrah). The collaboration in the group is so close Mock and MacDonald are now married.

For Don Giovanni, Darrah, Mock, and MacDonald are responsible for the entire production, including sets, lights, and costumes (while Schuessler and Larsen are away — she to costume HBO's The Newsroom, and he to finish a documentary).

The larger Chromatic family includes mezzo-actor-writer Peabody Southwell and dancer Janice Lancaster (both seen in the SFS Peer Gynt), playwright and director Roxie Perkins (with whom Chromatic is developing a new play), and Christopher Rountree, founder of the wild Up modern music collective, who will conduct Adams' A Flowering Tree, which Darrah and Chromatic will produce at Opera Omaha and elsewhere.