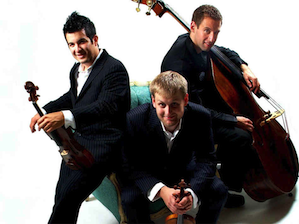 The Best Classical Crossover Album Grammy went extinct before Time for Three had a chance to qualify for it, but the three handsome, high-energy former Curtis Institute students might easily pose as the poster boys for the genre. Their recordings have topped the Billboard Crossover Charts, and they’ll be showcasing their new eponymous debut on Universal Music Classics in a performance at Yoshi’s in San Francisco. They’ve commissioned some of the 21st century’s brightest composers, including Jennifer Higdon, whose Concerto 4-3 the trio will be performing at the Cabrillo Festival on Aug. 3. And they’ve been featured performers with a variety of orchestras outside of the Indianapolis Symphony, where they maintain a residency. Speaking with SFCV, 34-year-old violinist Zach De Pue served as spokesperson for himself and his Time for Three (or Tf3) bandmates, violinist Nick Kendall and bassist Ranaan Meyer.

What about you, Nick, and Ranaan stood out at Curtis, Zach?

Curtis is a very small school; there’s only 160 students there, and every student stands out. There are student recitals throughout the school year, with a lot of chamber music, solo, and concerto work, and there are struggles to get a performing hall. The school is built around creating performers, no doubt about it, and we did stand out. Though honestly, we were screwing around; we were just three dudes who after orchestra would jam together.

How did that jamming turn into performance?

I think our debut was at the Curtis Christmas party, the only student-run recital of the year, where the students get to program what they want. So we three came out and did our stuff, and Gary Graffman, the president at the time, said, “You guys are on to something, and if you need any advice, tell us.” That would have been 2000 or 2001.

How long before you took the act on the road?

That didn’t come for a while. The school, having seen us at the Christmas party, booked us at the end of the spring semester for a corporate gig in D.C. A 25-minute show in front of a thousand executives, and they’d give us a limo and $150 each and the company credit card for dinner at the hotel? Hey, we’re golden, this is gonna be awesome! So we rolled down there, and 15 minutes before the gig, we didn’t have a name, so we came up with Time for Three; I thought it would be funny for the emcee. Out we walked, and we played, and the audience freaked out.

Were your arrangements a detour from the classical structure you’d been taught?

That was the whole point. And it was interesting, because each of us had a different background. I was coming in with bluegrass, Ranaan with a very deep jazz background, and Nick had had a hip-hop group through high school. So, I’d play a fiddle tune, Ranaan would add a bass line that was not bluegrass but still was cool and hip, and Nick would chop up the beat. It felt good, so we just went with it.

But aside from that eclecticism, you all had Classical cred.

Absolutely! Nick was Suzuki-trained; his grandfather was responsible for bringing Suzuki from Japan to America, in the early ’60s. I studied with the concertmaster of the Cleveland Orchestra for a few years, then transferred out to Curtis. To get into Curtis is a rigorous audition process, and the repertoire for violins is a full Romantic concerto, a full Mozart concerto, a Bach partita, two Paganini caprices, and all your scales and arpeggios. So we’ve all been trained classically, individually.

Each of us had a different background. I was coming in with bluegrass, Ranaan with a very deep jazz background, and Nick had had a hip-hop group through high school.

And you have classical gigs outside of your Tf3 tours.

The past five years, we’ve been curators and artistic directors of a small concert series with the Indianapolis Symphony Orchestra, called “Happy Hour.” Very soon after I got [to Indianapolis], they didn’t have a musical director, so the Pops director and myself and the trio became the face of the Symphony for a while, until they hired a new music director. [De Pue was appointed Indianapolis concertmaster in 2007.]

It looks like your gigs out here reflect the breadth of your careers.

Very different shows. The one at Yoshi’s [July 30] will be our “solo” show, representing our new [self-titled] album, which we just released with Universal Music Classics. A laid-back vibe, but we’ve done four other club dates on the East Coast, and we try to bring elements of the concert hall into the club. The other performance out there, with Marin Alsop and the orchestra [at the Cabrillo Music Festival, on Aug. 2], is a work written for us, by Jennifer Higdon. There are interactions with the orchestra you’re making music with, complete strangers! And you’re doing it on the fly, with one or two rehearsals, so there’s flexibility. When we do our own show, we control so much more of what’s gonna go out to the listener. But both are rewarding and incredibly exciting.

Tell me more about the Higdon piece.

Jen Higdon takes all the sounds you might hear in a typical bluegrass band show … and puts them in a classical context, in her voice.

We all studied in her 21st-Century Musician class at Curtis. And her very first composition teacher, at Bowling Green State University, was my father, Wallace De Pue! She used to see me running around the Music Building, when I was 7; she remembers me and I remember her, and my dad remarked on how talented and focused she was, even at that time. So it was just odd that our worlds, 20 years later, collided, with the Philadelphia Orchestra–Pittsburgh Symphony collaboration [on the debut of Jennifer Higdon’s Concerto 4-3]. In essence, Jen takes all the sounds you might hear in a typical bluegrass band show; virtually the whole first movement is slaps and chucking and the energy and rhythm you’d hear from a bluegrass band. It takes those elements and puts them in a classical context, in her voice. The second movement is a Gospel-type chorale. And the last movement is sort of a straight-ahead moto perpetuo fiddling-esque-type, 16th-note, drug-driven movement that runs off the page at the end. It’s a lot of fun to play; it’s a challenge.

Now let’s hear more about the album, which you’ll be showcasing at Yoshi’s. Will the club get a Classical hit?

We do a suite called The Fireworks Suite, which combines elements from Stravinsky’s Firebird Suite with [singer/songwriter] Katy Perry’s Fireworks. Neither is lesser than the other in quality; we’re playing it as we would any string quartet we might have studied at Curtis. I have to give credit to our coproducer on the album, Steve Hackman, who was a conducting student at Curtis, and is now artistic director of the Mash-Up Series at the Colorado Music Festival, where he puts a program together of Beethoven and [British rock band] Coldplay. On the album, “Chaconne in Winter” is Bach’s Chaconne in G Minor for Solo Violin, combined with [indie folk band] Bon Iver’s “Calgary.” That’s all Steve; he weaves it in, the melodies intertwine beautifully.

We’re creating an energy, a vibe, an overarching experience with our shows, rather than just being in your face all the time. I think we’re seeing music being music.

There are collaborators on the album who won’t be able to be with you at Yoshi’s.

On about half the album, and the other half is our arrangements. The main focus is [singer/songwriter] Joshua Radin, with four songs he gifted us, to set to our sound. There’s a tune with Branford Marsalis called “Queen of Voodoo.” We met him at a gig and he’s been a huge mentor to us. It’s crazy that he’s on our album; it’s kind of surreal. As is Alisa Weilerstein, one of the foremost concert cellists in the world today. We asked Kenji Bunch, a composer in Brooklyn, to reimagine “Vocalise,” by Rachmaninov, and Alisa plays her heart out. [Tf3’s] Ranaan did the arrangement on “Danny Boy,” inspired by Iz [the late Israel Ka’ano’i Kamakawiwo’o] who created a ukulele/groove vibe arrangement of “Over the Rainbow.” For that track, we brought in the sister duo, Lily and Madeleine [Jurkiewicz], whom I like to call the modern-day Simon and Garfunkel. Jake Shimabukuro, an unbelievable ukulele player we double-billed with at Princeton, is on a track Nick wrote, called “Happy Day.” And there’s “Banjo Love,” an original instrumental by Ranaan. This has been a great outlet in terms of our being able to find different voices to speak from on our instruments.

The thing I find different with this album is that our past, really, was trying to show how virtuosic we could be, fast and furious, very much about the chops. I feel now we’re allowing things to breathe. We’re creating an energy, a vibe, an overarching experience with our shows, rather than just being in your face all the time. I think we’re seeing music being music. It would be a lot easier if somebody could come up with a new category. But since we’ve been building this grassroots things with our fans, maybe that category will just be “Time for Three,” and people will know what that is.