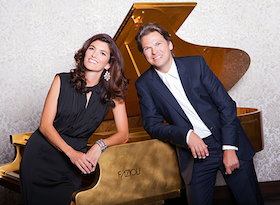 Summer is the season of music festivals, and San Franciscans can be proud of its eclectic collection of them. There’s everything between the enormous Outside Lands and the [email protected]

Returning this year is the biannual Milton and Peggy Salkind International Piano Duo Festival, previously noted in Janos Gereben’s Music News column. The festival this year is themed “A Baltic Voyage,” returning to the location where the founders, Cathy and Tony Angelo, went on their first European concert tour in the 1990s, discovering the love of the piano ensemble repertoires in the region. Familiar faces from as far as Italy and Armenia assembled, joined by ensembles from around the Bay Area, kicking off a celebration Thursday at the San Francisco Conservatory. 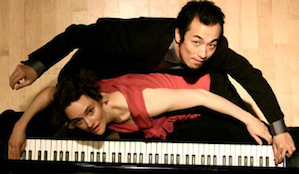 The cruise across the Baltic Sea began with J.S. Bach’s Sonata in E-flat Major, BWV 825, by the Bergmann Duo from Canada. The work was originally composed for an organ with two manuals and pedals, and the duo delivered a transcendental rendition of its tapestry. Woven clearly and deliberately, it seemed to supply the rich harmonics of an organ. The duo was keenly aware of the colors assigned to each of the voices, and the two Hamburg Steinways, with their perfectly matched timbres, gave the illusion that the music came from one single yet enormous instrument, filling the air with glorious sonority.

Next was Schumann’s Bilder aus Osten for four hands, in the person of the dynamic and bold ZOFO duet from San Francisco, one of the most enthralling piano duets of today’s millennial generation. The unsettled, volatile mood of the piece was delivered with precision, with Keisuke Nakagoshi’s and Eva-Martin Zimmermann’s souls unified throughout its six movements.

The duo was keenly aware of the colors assigned to each of the voices, and the two Hamburg Steinways, with their perfectly matched timbres, gave the illusion that the music came from one single yet enormous instrument.

One distinguishing aspect of the duet repertoire is that more-complex counterpoints and inner voices can be written than in solo repertoire. Nakagoshi and Zimmermann exploited this fully, and colored each of the voices with bold brush strokes. The result was an epic journey, with conflicting emotions clashing at times, reconciling at others. The inner struggle is what gave life and meaning to the piece, and they delivered.

Duo Turgeon, also from Canada, then took us to the north end of the Baltic Sea, all the way to Finland, with A Masked Ball for Two Pianos, Op. 36, by Selim Palmgren. It consisted of a flamboyant depiction of an extravagant ball from a bygone era, with the cascading chandeliers, in effect, supplied by Anne Louise Turgeon, and the orchestra by Edward Turgeon. There were giggling girls, and the somewhat drunken ball was illustrated with much humor. 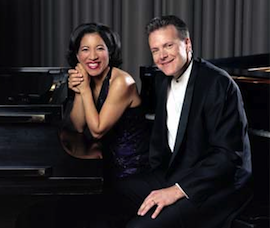 The cofounders of the festival, the Angelo Piano Duo, began their segment with Painting the Horse by Vladimir Sapozhnikov (b. 1945), a whimsical and at times jazzy illustration of a painting in process. There were some intricate details here, and there were bold strokes elsewhere. Even sweeter was Valery Gavrilin’s Adagio from the ballet Anyuta, lovingly transcribed for this festival by Raffi Kharajanyan, who is a regular here. The Angelo Duo gave it a delicate, sweet, yet emotional atmosphere. I was left wanting to see a dancer on stage, however; but next Sunday evening’s performance of the work, at the Palace of Fine Arts Theatre in San Francisco, will feature dancers on stage, in an American premiere.

Infused with dadaistic absurdity, improvisatory elements, tone clusters, and even acting, it was an entertaining show of irreverent and self-deprecating humor.

Thursday’s concert concluded with a pair of ambitious pieces by Vadim Bibergan (b.1937). Kharajanyan, and his new duo partner, the Armenian Armine Grigoryan, now playing as the AR-RA Duo, which presented Three Russian Old Time Laments. Infused with dadaistic absurdity, improvisatory elements, tone clusters, and even acting, it was an entertaining, if somewhat bizarre, show of irreverent and self-deprecating humor. Yet it also contained many interesting musical elements, such as parallel chords that added overtones, just like a section in Ravel’s Bolero. What would I do, in St. Petersburg, singing a lament? Yes, that’s exactly what it sounded like, with vodka in hand.

The Angelo Duo joined the AR-RA Duo to perform Polka Nora. It was dedicated to Nora Novik, who died suddenly in 2009 and who was Kharajanyan’s long-term duo partner in the Riga Piano Duo, which performed all over the world for some 40 years. The rambunctious polka was both silly and charming at the same time, and was a fine tribute to Novik, who is still greatly missed by the piano ensemble community.

This concert was just a beginning of the Salkind Festival’s six formal concerts and three salon concerts. It also offers numerous master classes for young students. If you have a moment to spare while hopping among music festivals this weekend, this festival should definitely be on your calendar.