The little festival with big ambitions, the Milton and Peggy Salkind 5th International Piano Duo Festival not only received rave reviews, but from opening to closing last weekend, it went on to surprise and gratify audiences. 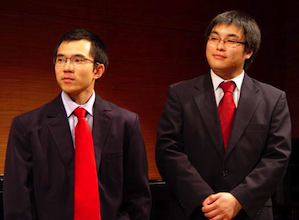 To open the festival, two pianists at a time, playing to a small audience in the S.F. Conservatory's subterranean Osher Salon, presented a fascinating program. The Firenze and Angelo Duos, and Judy Sabin and Richard Stevens performed, respectively, music of Anton Rubinstein, three Soviet-era composers, and Glazunov, before the Kepska Duo of Edgar Woo and Kevin Goh dazzled with a percussive, powerful performance of Shostakovich's Concertino for Two Pianos, Op. 94.

The two young pianists already have an impressive record, and as festival co-director Catherine Angelo proudly said in introducing them, Woo and Goh have been part of the festival's history, participating in all of the Salkind Young Artists' Concerts since 2006.

Sunday's closing concert in the Palace of Fine Arts combined piano and ballet in unprecedented ways, as described by an audience member:

This concert was the quintessential moment. The festival's 12 pianists joined forces with dancers from San Francisco Opera Ballet, Marin Dance Theatre and Smuin Ballet Co. San Francisco Ballet's Tiit Helimets choreographed the U.S. premiere of a suite from the Russian ballet Anyuta, the story based on a Chekhov short story.

The stage vibrated with music composed for dance and the dancers became the music with each and every movement. There was something mystical about the double helix of music and dance. The festival audiences were not only gifted with the musical treasures of "A Baltic Voyage," but were witness to artistic history being made.