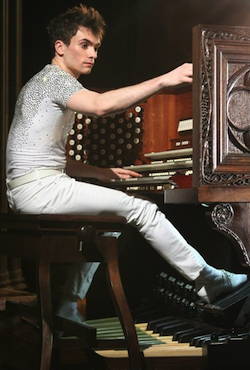 In the reviews written for SFCV during the first of our student workshops, in 2012, organist Cameron Carpenter stood out as one of the most compelling performers to the middle and high schoolers I shepherded to a San Francisco Symphony concert at Davies Symphony Hall. On If You Could Read My Mind, to be released next week by Sony Classical, the dynamic symbiotic relationship between Carpenter and his instrument — the organ — is again in evidence, on a delightful journey from Bach to Broadway to Piazzolla to pop. The accompanying DVD showcases the spiky-haired 30-something virtuoso in a sleeveless T-shirt, with close-ups on his sparkly slippers dancing vigorously across the pedals.

His own high school years were spent at the North Carolina School of the Arts, where the teenaged Carpenter was already proficient at transcribing to organ before he embarked on undergraduate and graduate study at the Juilliard School. After graduation, he began touring internationally and assumed a residency at Middle Collegiate Church in New York City’s East Village, where he designed a four-manual electronic organ fitted to his and the congregation’s wide-ranging musical tastes. His recordings on the Telarc label engendered multigenerational fandom for and rankling criticism of his unorthodox interpretations, which at times ignored composers’ registrations and took liberties with articulation.

Carpenter’s SFJAZZ concert at Grace Cathedral, at the beginning of this year, was sold out. He’ll make another stop at Davies Hall next month, to perform Harry Brant’s Pulitzer-winning Ice Field with the Symphony, on the resident Ruffatti organ. But Carpenter is eager for San Franciscans to experience the electronic International Touring Organ, which he designed, featured on the upcoming Sony Classical release, and will be transporting and playing on during most of the rest of his current tour. He spoke with SFCV from his current home base in Berlin.

Is Berlin a good place to be Cameron Carpenter?

I’ve enjoyed substituting European intellectual stimulation for long commutes and arguments over partisan politics. The unbelievably politically charged and culturally in-crisis environment in the United States, while it’s a place I miss, is a great source of white noise to a person who’s trying to concentrate on building a career in classical music in the 21st century.

You’re making me envious. So your friends are musicians and intellectuals?

Some are both. But my friends are a broad, diverse group that includes politicians, transgender prostitutes, and club producers. And I’ve got a good friend who’s a sailor.

You made a bunch of friends among the kids I brought to Davies a couple of years ago, where you played your arrangement of The Stars and Stripes Forever on the Symphony’s organ. You were a highlight of their evening.

Oh, how great; oh my god, that’s great to hear!

In their reviews, the kids seem impressed by your hair and your outfit, which are not what most older audiences would expect on a concert stage. Is that more of a European club style?

The current mayor of Berlin, Klaus Wowereit, knew something when he said, “Berlin is poor, but sexy.” Accordingly, Berlin is not a fashion capitol, and it’s not a place that puts a great premium on how a person looks. The Berliners have their parties inside them, and I find that so very different than the $600-a-bottle velvet rope nightmare that clubbing has become in America. I go about fashion the same way I go about music, which is: I pay very little attention to designers, and very much attention to the effect of the piece. With composers, even living composers, the idea of the person doesn’t mean a lot to me, but the individual pieces, my god! And it’s always been important to me to be seen by my audience as having style, and unabashedness.

With composers, even living composers, the idea of the person doesn’t mean a lot to me, but the individual pieces, my god! And it’s always been important to me to be seen by my audience as having style.

Is the sleeveless T-shirt you’re wearing on the DVD also more comfortable?

Yeah. The physical demands of playing the organ are irreconcilable with having body-inhibiting clothing. And I am, of course, a person who’s very attached to my body. I train. I feel it a requisite for performers to look really good on stage, not by the standards of classical music, but, like, media-ready. We shouldn’t go in front of an audience with an untoned body.

We get to see you perform on your International Touring Organ on the DVD, and there’s a little documentary about how you designed the instrument. Did you mean it to be stylish too?

Absolutely! I’m at first pains to point out that this instrument is not a theater organ, just because it happens to have colored stops, an extremely dramatic console design, and so many controls. It’s essentially a synthesis of several aspects of the consoles that for me have been the most comfortable to play. It takes its cues primarily from American organs of the 1920s and early ’30s, like Kilgen from St. Louis and Kimball [from Chicago]. They were fascinating instruments to me, because they have — like me — a sort of combined gender or, maybe to put it more fittingly, a gender nonspecificity.

American organs of the 1920s and early ’30s … were fascinating instruments to me, because they have — like me — a sort of combined gender.

In the album liner notes, you explain how your design electronically samples aspects of organs you’ve been pleased with and influenced by, including one in Erie, Pennsylvania.

That was one of the most important organs in my life, the first five-manual organ I played.

How old were you?

I was 6 years old, and I couldn’t reach the fifth manual [i.e., the top keyboard]. It gave me the important sound of the fourth manual, the so-called “solo division.” one of the most romantic divisions [ranks of pipes]. A shorthand way to understand the structure of the International Touring Organ is: We basically started with a four-manual university [church] organ, which is to say, an Aeolian-Skinner from the mid-1950s, and added to it a modest three-manual Wurlitzer [theater organ]. There is obviously every advantage taken of digital luxury, which could be afforded, but would be unthinkable in terms of the construction of a pipe organ.

Does the hybridization of church and theater organ elements allow you to better extend yourself across your repertoire?

Unquestionably! And there’s no question of legitimacy, because, like a non-normative sexuality, society doesn’t recognize it, it doesn’t give you a set of rules. You can bring in any possible influence, and I’m extremely influenced by aspects of musical and human creation, which can be considered outside of classical practice.

I’m extremely influenced by aspects of musical and human creation, which can be considered outside of classical practice.

But we won’t be hearing the International Touring Organ at Davies Hall.

Because this is not a Cameron Carpenter solo show. I’m playing with Michael Tilson Thomas, and at least 110 other musicians, on Henry Brant’s Ice Field. And the right organ for that piece is their organ, which in fact is the instrument Brant himself played it on [for its 2001 premiere; it was awarded a Pulitzer Prize in 2002].

Does the Brant piece fit you?

I think my great challenge is to rise to it; it’s a piece that confronts you. It’s this unbelievable amalgam of forces related and unrelated, this patchwork through which the constant is this improvised organ part. I cannot play it unless I turn off my earlier ideas of restrained, disciplined keyboarding and my understanding of tonal harmonies. I have to not find myself moving in diatonic or tonal ways, but to try to respect the language which he’s setting up.

Is it appropriate to compare the organs you’ve played at Davies and Grace?

My impression of the Davies Hall organ [built by Ruffatti] is that it has a sort of transparent sound that can summon up moments of great force. It has a very bright and, I think, a vertical rather than horizontal identity. I see it in terms of bright yellows and whites. The [Aeolian-Skinner] organ at Grace Cathedral is a sort of Fleet Street steak-and-kidney pudding, romantic greens and grays and dark lavenders, with a few points of iridescent red here and there, but not a great deal of brightness. They should get together some time, because each of them has what the other one needs! With the International Touring Organ, I’ve thought of both of them; little bits of their identities have been brought to bear on my thinking. They’re both great organs, and they’re local institutions. But that’s part of the paradox of the organ: It has this implication that it’s around forever. But organs are as temporal as everything else. And that’s what I like about the movability of the Touring Organ [which can be crated up, with its own speakers and electronics]. It doesn’t, in a Christian way, try to give you a symbol of an instrument that will always be there, just like Christ’s love itself.