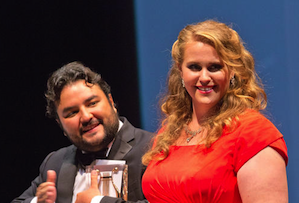 At the conclusion of six long days of competition, a silver-voiced American Wagnerian soprano, Rachel Willis-Sørensen, and a passionate heart-on-sleeve tenor from Guatemala, Mario Chang, took top honors at the 2014 Operalia competition in Los Angeles. In addition, they each won the competition’s Zarzuela prize; Willis-Sørensen was awarded the Birgit Nilsson Prize; and Chang received the Award of the Public (a Rolex watch) decided by audience vote at the end of the competition. Their combined winnings (not counting the watch) totaled a remarkable $95,000.

For the first time in its 22-year history, the judge’s point totals resulted in a statistical tie for both the men’s and women’s third place awards. The two male winners were a pair of remarkably gifted countertenors — Andrey Nemzer of Russia, another Met Council Auditions winner and a veteran of competitions, and American John Holiday. A pair of high-flying sopranos — Italian Mariangela Sicilia and Anaïs Constans of France also shared third place.

Opera is an art. “Operalia,” said Plácido Domingo, who founded the international singing competition in 1993, “is a sport. It is the Olympics of singing.” 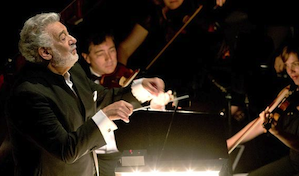 Unlike other vocal competitions, Domingo emphasized during a news conference on Aug. 26, Operalia was designed as a showcase for young singers that are already on the verge of spotlight careers. And from the moment a contestant is accepted from the more than 1,000 applicants, all their expenses are covered. “We want them to be comfortable. We want them to become friends. Though it’s true,” Domingo conceded, “some will become rivals.”

So, at the same time the judges were focusing their attention on purity of tone and the clarity of high notes, they were also evaluating the needs of their respective institutions, prepared to offer contracts to singers they liked on the spot. That’s why, as one contestant pointed out, “Operalia is as much an audition as it is a competition.”

Simply to be chosen as an Operalia contestant is a prestigious accomplishment. Being named an Operalia winner brings with it substantial cash rewards ($30,000 for first place). But it is also, more importantly, a resume credit that is guaranteed to open stage doors. “I can tell you,” said Domingo, “Operalia competitors and winners are appearing now in every major opera house around the world.”

“Operalia is as much an audition as it is a competition.”

According to Marc Stern, the Chairman of Los Angeles Opera (which also hosted Operalia in 2000 and 2004), “We are proud that 52 winners of Operalia have performed with L.A. Opera. In the coming season (which begins on Sept. 13 with Domingo performing his first Germont in La traviata) seven previous Operalia winners will be included as well as one of this year’s contestants,” (John Holiday, who will sing the role of the Sorcerer in Dido and Aeneas).

Stern wasn’t shy about who he was rooting for.

“I wish success to every one of the competitors,” he said at the news conference. “But please realize I’ll be rooting for the four past and present members of our Domingo-Stein-Colburn Young Artist Program and one additional competitor (Holiday) who is making his company debut with us. As you can see, the history of Operalia and Los Angeles are intimately involved.”

Whether a close association with Domingo and L.A. Opera constituted a home-court advantage for certain competitors is not entirely clear. But there did seem to be a sense of inevitability, at least among the spectators, that their local favorites, “Josh” and Amanda would be winners. And they were.

The first two days of the competition (Aug. 25 and 26) reduced the initial field of 40 singers to 20. The vast interior of the Dorothy Chandler Pavilion was empty except for the panel of judges and a small invited group of press, Opera Guild, and board members who occupied seats in the balcony. With cheat sheets in hand they made ready to mark down their favorites, along with the judges.

The first contestant to make an indelible impression was Willis-Sørensen, who sang “Dich, teure Halle” from Wagner’s Tannhäuser, the aria that would ultimately carry her through the finals. 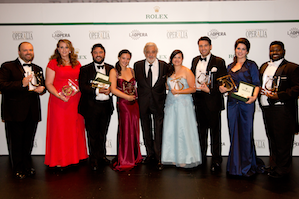 In contrast, a short, stocky, bearded tenor from Guatemala, Mario Chang, seemed decidedly uncomfortable. In his ill-fitting black suit and open collar shirt he looked more like a rumpled version of John Belushi. But when he began to sing “Parmi veder le lagrime” from Verdi’s Rigoletto the quality of his voice was undeniable.

Then there was the surprise of the day.

Onto the stage strode a young black man from Houston, Texas, with the build of a linebacker, dressed in his going-to-church best. No one was prepared for the distinctly original sound, the volume, and the clarity that John Holiday brings to the countertenor repertory. His renditions of “Crude furie,” from Handel’s Serse, and “Va pure ad altri in braccio,” from Mozart’s La Finta Giardiniera, literally stopped people in their tracks. According to Gary Murphy (L.A. Opera’s head of publicity), “We were in our offices listening to the performances from the stage. When John started to sing everyone just stopped. We looked at each other and said, ‘What is that?!”

It was also the first appearance for Amanda Woodbury, a willowy soprano with glittering high notes and flawless technique who performed Ophelia’s “A vos jeux, mes ami,” the mad scene from Ambroise Thomas’ Hamlet, which ultimately carried her to the finals.

The Agony of Defeat

When the semifinalists were announced (at midnight on Aug. 26), there were two surprises (at least to me). Neither the dashing Mexican baritone, Germán Olvera, who had dominated the stage with his rendition of “Largo al factotum” or the golden-haired Ukrainian soprano, Tamara Kalinka, who had sung “Měsíčku na nebi hlubokém” (Song to the moon), from Rusalka had advanced. Later, a young, high-volume tenor from China, Jinxu Xiahou, who had greatly impressed the non-judges, also failed to progress to the finals.

“You know, I never competed in a competition. I could not do what you do. And I wouldn’t have won.” — Operalia founder Plácido Domingo

“This is the part I love, and the part I hate,” said Domingo when it came time for him to announce the finalists. “You know, I never competed in a competition. I could not do what you do. And I wouldn’t have won.” That is hard to imagine.

Domingo’s commitment and constant presence at Operalia is unique. He is not a voting judge, but he is there for the entire competition. He introduces the singers. He urged them to drink lots of water between arias. And he conducts the orchestra that accompanies their final appearance.

The finals on Aug. 30 had all the excitement of an opening night gala and were streamed live around the world on medici.tv. And to their credit, after six long days and nights of preparing, singing, and endlessly waiting, each of the singers delivered their best performances of the competition. They were all winners.

At the same time that the finals were taking place, just down the hill from the Music Center in Grand Park, the two-day rock phantasmagoria, “Made in America” was going on, pitting Imagine Dragons and rapper School Boy Q against Giuseppe Verdi and Richard Wagner, tats and piercings versus tuxedos and ball gowns. It was so L.A.