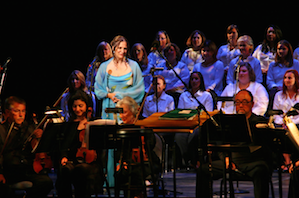 Large opera companies of New York City, Baltimore, and others are gone (if not yet forgotten). Ancient opera houses in Vienna and Rome (see next item) are in turmoil; San Diego Opera is trying to come back to life. And meanwhile, there is a remarkable small organization in our neck of the woods that just won't give up.

Walnut Creek's Festival Opera, which went from adventurous to broke, "bounds back with optimism and a robust 2015 season," says General Director Sara Nealy.

In addition to a holiday gala on Dec. 3, an Opera in the Park event next June, the company's big project is a semi-staged production of Richard Strauss’ big, sprawling, demanding Ariadne auf Naxos, a work that would test any major company, in July. Michael Morgan returns to conduct a cast that includes Shawnette Sulker as Zerbinetta and Shirin Eskandani as the Composer. Morgan told Music News:

After spending so many seasons there, I am happy to see Festival Opera coming back. If they think it will be helpful for me to lead a production, I will be there with enthusiasm. That they should ask me to come back for one of my favorite pieces does not seem like a coincidence. So I wish them very well. If they're there, I'm there.

Ariadne will be done with orchestra in a minimally staged fashion (which actually suits the piece pretty well) with orchestra on stage (upstage, as it's a small orchestra), as I understand. No decision yet on who will lead the production side, but that's being discussed. The piece was chosen because if you're going to try to make this sort of return, it should be with a piece about which everyone in the company cares deeply. 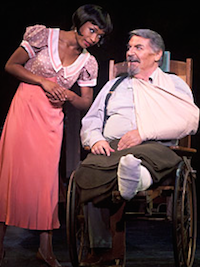 Then, on a date yet to be announced, Festival Opera will also present two chamber operas — Gustav Holst’s Savitri (with Maya Kherani, Jorge Garza, and Philip Skinner), and Jack Perla’s River of Light (again with Kherani, who sang the role of Meera to acclaim at the Houston world premiere recently).

To summarize company history: Festival Opera was established in 1991 by Dr. Theodore Weis, a baritone and nephrologist (currently at John Muir) who had previously founded Arizona Opera. His goal was to offer East Bay residents professional opera productions at a regional level that would augment what was offered in San Francisco.

Slowly, steadily — under the leadership of artistic director Jim Sullivan, then Olivia Stapp, and for the past 12 years of Morgan as music director and artistic director — Festival Opera progressed to successful production of fully-staged live opera performances that have received critical acclaim for 24 years.

The company has given employment and artistic expression to emerging singers, designers, directors and musicians, and launched the careers for several who now perform at SFO and the Met, and whose careers are now nationally recognized (such as Brandon Jovanovich and David Miller) who got their first break in roles in Walnut Creek.

In 2000, the company began to expand artistically, augmenting its traditional repertory with lesser-known operas, contemporary interpretations, and new American works. 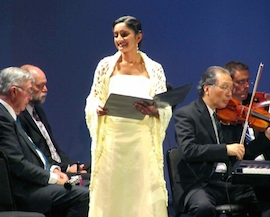 In 2011, shortly after the arrival of Nealy as general director, "the company experienced a very large deficit (over $200,000) at the end of the summer season," she says, "and dramatic action was required in order to keep the company in operation. The first action I took was to ask stakeholders, 'Should we?' There was enough enthusiasm and feeling for the company to warrant continuing, but it was clear that a new normal had to be found."

Stabilizing finances, cutting back on productions, collaborating with West Edge Opera, offering opera on a smaller scale — such as Ullman’s The Emperor of Atlantis and Heggie’s Another Sunrise this year — Nealy says, "We have built a template for what we hope will be a model for sustainable operations, offering meaningful work of high artistic caliber that will appeal to a more diverse audience in our community." Still, the fiscal situation is dramatic, however positively Nealy manages to put it:

Our hearts are in it, and we feel that we are turning the corner now. We could not have done it without the support and understanding of patrons and institutional funders who appreciate our efforts to find a responsible and efficient way to operate while still being artistically relevant.

And yet, the phoenix does rise and fly. Once it's resurrected, according to the legend, it has 1,400 years before another death and rebirth. That should give Festival Opera enough time to return to its glory days.