Concerts by the Square just concluded its inaugural series — three concerts of chamber music performed by local professional musicians including members of the San Francisco Symphony, San Francisco Opera, and San Francisco Ballet orchestras; Marin Symphony, and Philharmonia Baroque. Billed as “a new way to experience classical music,” the informal house concerts actually harken back to a salon tradition most of us have only experienced through reading 18th- and 19th-century novels. Truth is, these kinds of gatherings never really went away, they’ve just become increasingly hard to find out about without “knowing someone.” 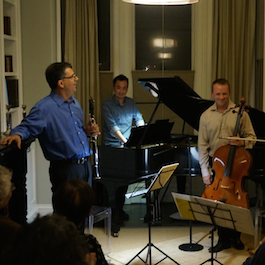 Enter host Robert Howard, a cellist who has performed with American Bach Soloists, New Century Chamber Orchestra, Philharmonia Baroque, and the S.F. Symphony among others, who decided the time was right to make this kind of experience more available to the public.

The concerts take place in a lovely flat a block from Alamo Square. In the back of the flat guests are welcome to partake of wine or soft drinks and a tempting array of hors d’oeuvres. Out back is a balcony with seats, where when I arrived a number of people already taking advantage of the warm evening, the wine, and the view. I was surprised by the age range of those present, which easily covered a 50-year span without one side feeling dominant over the other. Conversation flowed. I recognized a number of faces from other venues ... this is a small town, after all.

Sometime after the announced starting time of 7 p.m., Howard summoned everyone to the front of the flat. The performance space was the living room, which had floor-to-ceiling bookcases, a fireplace, a baby grand piano, chairs for the musicians, and a few more for some of the audience. Two adjacent rooms became antechambers to the space and held the rest of the audience. It felt as if everyone had entered into a contemporary version of a Henry James novel. Howard, cello in hand, stood in the center of the room, formally welcomed everyone, then introduced pianist Keisuke Nakagoshi, who’s frequently seen on local stages as a soloist, one-half of the ZOFO Duet, pianist in residence at the San Francisco Conservatory, and as Opera Parallèle’s resident accompanist.

Discussing the first selection, Janáček’s Pohadka (Fairy Tale), Howard mentioned it’s based on “The Tale of Tzar Berendy,” which was also the inspiration for Stravinsky’s Firebird, noting there might be a hint of Stravinsky’s vision in Janáček’s telling. The Stravinsky connection escaped my ears, but echoes of the composer’s “Kreuzter Sonata” string quartet came through, though I couldn’t swear the setting had nothing to do with that. Howard and Nakagoshi moved nimbly through Janáček’s three-movement sonata, which aptly begins with a floating piano line and the cello making a tentative pizzicato entrance before delving into the piece’s alternating rhythms which juxtapose one instrument leading against the other.

San Francisco Symphony clarinetist Jerome Simas joined them for an intense take on Brahms’ Trio in A Minor. His lyrical playing, at its most expressive during the third and fourth movements, created a nice counterweight to the forceful sway of Nakagoshi and Howard. The series will continue in the Fall.