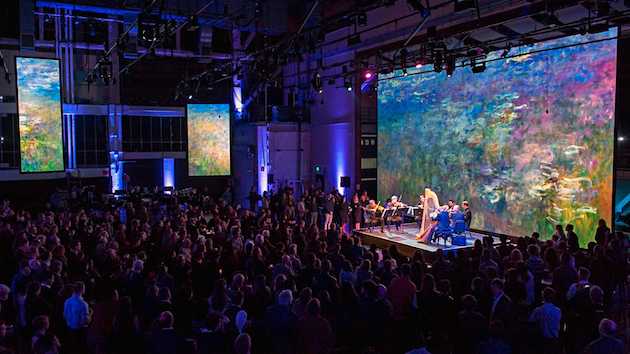 Zellerbach A, one of the San Francisco Symphony’s on-site rehearsal spaces, used to have a sinister reputation as one of the deadest halls on earth. I had the privilege of testing that claim a few months ago, when I participated in a rehearsal and experienced my own sounds disappear in the vast and surprisingly non-reverberant space.

Yet the Symphony has now harnessed these negative qualities to make the hall into a sort of acoustical blank canvas, a tranformation made possible through the installation of Meyer Sound’s multi-speaker “Constellation” system. Using real-time reverberation and spatialization algorithms, this sound engineering solution tricks our brains into perceiving vastly different acoustic spaces. Add comfortable, if scarce, seating, evocative video projections, blue-and-green mood lighting, and of course alcoholic libations, and you might have created just the kind of alternative venue that would make Jonny Greenwood proud.

Saturday night saw the debut of this new experimental space, dubbed SoundBox, and the impression was that we are off to a great start. A line had formed neatly outside 300 Franklin St. before the doors opened at 8 p.m., and the program itself was not scheduled to start for another hour.

These early audience members were treated to parallel hour-long performances of John Cage’s iconic Branches, an exploratory sampling of the surprisingly wide range of sounds one can coax from amplified plants, and Inlets, which employs seashells, water, and burning pinecones.

The four musicians roamed into the former orchestra pit, transformed into a desert landscape and projected in multiple transparent layers on the screens that surrounded the main seating area. This area used to be the soundstage of Zellerbach A, and it now featured plush leather seats, cocktail tables, two smaller raised stages at the front and left, and a bar at stage right. You could wander about, get a drink, or zero in on the irregular rhythms and textures of the unfolding musical soundscape, though most people seemed preoccupied with securing a seat for the rest of the night.

Throughout the evening, the attention to small design details suggested the influence of contemporary User Experience concepts.

The inaugural program, titled “Extremities,” was structured as three short sets, each between 18 and 30 minutes in length, separated by two 20-minute intermissions. The pacing worked for the most part — the variety of the pieces and the quality of the performances ensured that the audience, a substantial portion of which was standing, never got restless — but perhaps the second intermission could have been shortened. Throughout the evening, the attention to small design details suggested the influence of contemporary User Experience concepts, which are commonplace in museums and visual exhibits and definitely at home here in the Bay Area. Considerations of the audience’s attention span, or a desire to drive concessions sales might have been at play in such structuring.

The Constellation system was introduced rather humorously by the customary safety announcement, enabling the audience to locate the various exits with their ears, rather than just by looking around; and by a brief and effective demonstration by Symphony Musical Director Michael Tilson Thomas on claves. After that, the true spectacle commenced.

First the members of the SFS Chorus filed in from the far end of the stage, chanting an arrangement of the virelai (dance song) “Stella splendens in monte” from the 14th-century collection of devotional songs known as the Red Book of Montserrat. The acoustics of the hall were fittingly changed to a cathedral-like resonance. Once on stage, the chorus continued to mesmerize with Josquin des Prez's “Kyrie” from Missa pange lingua, exploding the stark simplicity of the previous number into glowing triadic polyphony.

As the audience got more relaxed, a certain raucousness accompanied the projection of Steina and Woody Vasulka’s Voice Windows.

The chorus explored the “extremes” thematic element through a jump forward in time of about 500 years, as they launched into a kinesthetic performance of Meredith Monk’s Panda Chant II (1984), an imagined ritual for a post-apocalyptic civilization struggling to remember its roots. Polyphonic and rhythmic considerations provided the link to the last piece of the section, Steve Reich’s austere and hypnotic Music from Pieces of Wood, during which I spied audience members grooving more intensely than I ever saw in Davies Symphony Hall proper.

Some of the format’s quirks emerged in the second portion of the program. As the audience got more relaxed (and socially lubricated?), a certain raucousness accompanied the projection of Steina and Woody Vasulka’s multilayered Voice Windows. As suggested by the title, the work uses visualizations of various vocalisms (provided by Joan La Barbara) to morph between simultaneous and overlapped video footage.

Things returned to a semblance of order for the following pair of extremely contrasting pieces: Ravel’s delicate “impressionist” textures of the Introduction and Allegro, rendered beautifully on the pedal harp by Doug Rioth, were all but obliterated by Varèse’s terrifyingly loud and hypermodern Intégrales.

The evening, however, closed with a return to the rarefied atmosphere of the opening, as Tilson Thomas conducted the chorus and a small consort in a convincing (and sweetly reverberant) performance of the “Magnificat” from Monteverdiʼs Vespers. Opposing soloists spaced across the hall (in the manner of Giovanni Gabrieli’s arrangement of multiple choruses in St. Mark’s basilica) satisfied the thematic requirement while the music transported the audience into a timeless plane — reminding us that, more so than any technological and innovative elements, programming and performance must deliver. And they did.