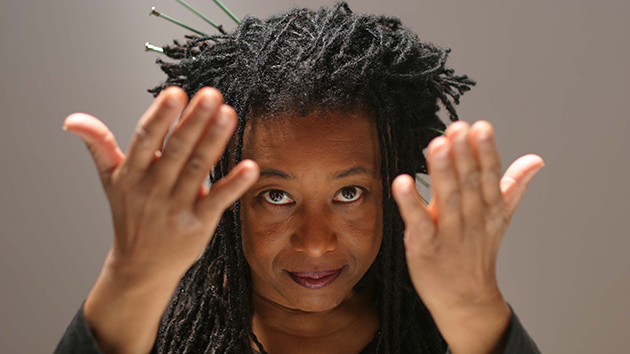 With busy, artist-driven venues like the Center for New Music, you never know what you’re going to get on your average Monday night. When it comes to the likes of vocalist/composer Pamela Z, however, you can safely expect a prime-time effort no matter the day of the week.

The performing forces consisted of Z on voice, percussion, live electronics, and video projections, and Shinichi Iova-Koga on movement and occasional sound effects. The pair took on different roles over the course of several improvisatory sections, each of which was characterized by a narrow range of materials and consistent technical approach. Sometimes Iova-Koga’s motions appeared to be dictated, even constricted by Z’s sonic tapestries; other times the dancer accompanied the singer, his rhythmic stomping providing a regular foundation to her blurred vocal loops. Occasionally the audio and visual elements drifted apart, encouraging the audience to focus on either performer independently for a time.

As evinced by the intricate setup — two laptops, one projector, several microphones, and a couple of digital cameras — technological elements played an essential role in the evening, whether processing and transforming the voice, bathing the singer in pixellated white light, or feeding stage and ambient sounds into Z’s trademark multiple delay lines. The system, however, never came across as contrived, as the performers moved seamlessly in and out of pieces, harnessing the creative potential of the setup rather than depending on it. In one dramatic section, Z captured a short video of the dancer and projected it onto the wall, manipulating the playback into a series of spasmodic bits, and essentially transforming Iova-Koga into a digital puppet. Previously the roles had reversed, as Iova-Koga’s loud flopping on the floor bled into Z’s microphone, disrupting the loops she had just set up with a series of harsh digital pops.

As a duo, Z and Iova-Koga displayed remarkable attunement, performing with unity of intent and deliberate, intoxicating command. It helps that their individual talents are so refined.

As a duo, Z and Iova-Koga displayed remarkable attunement, performing with unity of intent and deliberate, intoxicating command. It helps that their individual talents are so refined: Z’s vocal range is nothing short of extraordinary in terms of timbral, dynamic, and expressive contrast, whereas Iova-Koga’s quality of movement combined intensity with the frequent illusion of weightlessness. The dancer also made excellent use of the Center for New Music’s irregular layout, disappearing behind corners, rehydrating at the water fountain, and loudly climbing the stairs to the mezzanine offices. Z’s movements, though limited by her necessary proximity to the electronics, were also carefully studied to match the affect of her partner.

Throughout the hour-long performance Z and Iova-Koga conjured a wide range of emotional moods. Some of the pieces were exploratory, with movement echoing sounds as they were digitally deconstructed; other times the action on stage was more intense, as when the dancer kept ricocheting in a narrow passageway, violently throwing his body against the walls, with Z providing a detached (and unsettling) commentary: “He’s very, very strange.” There were serene moments, too: in the closing number a polyphonically layered mantra (“It is what it is ... there’s nothing more to say ...”) accompanied the dancer’s trancelike movement, and lulled the captive audience into a state of complete stillness and utter wonder.