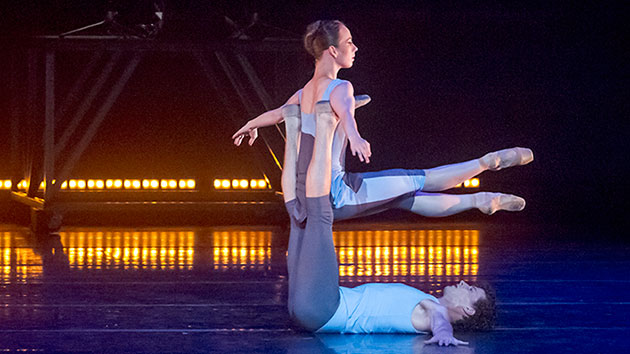 Ballet San Jose Silicon Valley, despite notable gains in artistry and ticket sales, is once again fighting for its life and will shut down March 14 if it fails to meet its fundraising goal. The company, now under the artistic direction of former American Ballet Theatre star Jose Manuel Carreno, must raise $550,000 by then, Executive Director Alan Hineline said yesterday.

The new campaign is titled “Bridge to the Future.” That $550,000 is in addition to the $580,000 the company’s board of trustees has quietly raised since last January, when, in the company’s words, it identified a “strategic need” of a total of $3.5 million “to complete the repositioning and turnaround … by October, 2015.”

Tuesday’s announcement came in the middle of the company’s season, presented annually at the San Jose Center for the Performing Arts. There were signs of trouble last November, when the company could not reach an agreement that it could afford to have live music: All the music was recorded for the company’s December Nutcracker season, a crucial cash cow as at many companies, and for the rest of the season’s shows.

Even without live music, though, last month’s triple bill of Fancy Free, In the Upper Room, and Theme and Variations drew critical acclaim. The next scheduled program is “Bodies of Technology,” featuring two world premieres, March 27 - 29 ; the final show of the season is Ben Stevenson’s Cinderella, May 8-10.

Hineline blamed the financial brink on the “historical mismanagement” of the company over the years. “Those sins are now being paid for,” he added. “We’ve got to get out in front of this legacy.” He said the board of trustees is displaying “tremendous tenacity” in fundraising, and praised the counsel of its pro bono legal team as well.

The dancers, who are in the middle of rehearsal period, were not told about the company’s financial crisis until this week, Carreno said in an interview. “It’s hard on the dancers. We were trying not to let them know, and prolonged it as long as we could. So now everybody knows. They’re asking, how can we help, what can we do?” Several have launched a fundraising campaign on Facebook.

The company was founded in 1986 as the San Jose Cleveland ballet by Dennis Nahat and Ian Horvath. While making artistic strides, as well as establishing a well-respected ballet school, the company under Nahat’s artistic leadership was frequently in financial disarray, its board relying heavily on the good offices of major contributors from the community, which was growing into a tech powerhouse. One of the chief contributors during the Nahat years was John Fry, owner of Fry’s Electronics, who gave the company millions of dollars – according to the San Jose Mercury News, $20 million over the past decade.

Since the complex chain of events that led to Nahat’s dismissal as artistic director in 2012 and the company’s subsequent alliance with American Ballet Theatre, Fry’s participation and donations have decreased. Now he has no involvement with the company, Carreno said Thursday, adding that the reasons he stepped away included his private life. Carreno declined to elaborate and Fry, whose name was long linked with that of one of the company’s ballerinas, Alexsandra Meijer, was unavailable for comment.

According to Millicent Powers, chair of the board of trustees, there are some signs that things are improving. The company’s ticket sales have risen 32 percent over last year’s, revenues at the ballet school are up 12 percent, and contributions have increased by 17.8 percent over the first and second quarters of this year compared to last.

Company management said that last January the troupe began quietly fundraising for a campaign it has now titled “Bridge to the Future,” gathering some $580,000 in donations.

In order to survive, the company has to raise $3.5 million by October 2015. If this $550,000 Bridge to the Future is “built,” then the next step is to launch a new campaign, the Fund for the Future, which would move the company to “a stable and strategic long-term funding model … to increase the quality of art, education, and community outreach.” The company, Powers said, has “angel funds” totaling $2.7 million in unrestricted contributions to implement this next phase in its development.

The plans include changing the company’s name to Ballet Silicon Valley and performing regularly in Palo Alto and Mountain View, as well as San Jose, to widen audiences and support. This “hub and spoke” system, one of the ideas suggested by arts consultant and former Kennedy Center for the Performing Arts chief Michael Kaiser, who has been informally advising the company, was used successfully at the Miami City Ballet. Powers said possible venues might include Stanford University and the Mountain View Center for the Arts, and adding informal “pop-up” performances in spaces like San Jose’s Tech Museum, parks and fairs, like the ones Carreno took part in when he was dancing in his native Cuba with its national ballet.

On Thursday, Carreno recalled that at ABT in New York, he once experienced a similar situation; the company hovered near bankruptcy. “We got past it. I remained very positive and very faithful, as I am now.

We’re new,” he added, speaking of Hineline and Powers as well as himself, “but we believe in this. It’s a wonderful company.”

“We’re so hopeful. There’s so much to be proud of,” Powers said. “We didn’t want to slink away.”

Donations may be made through the company’s web site, www.balletsj.org