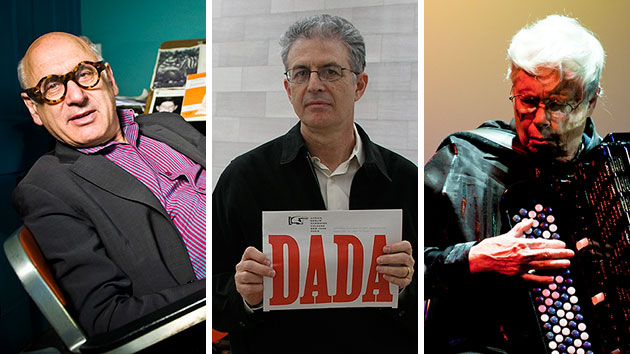 While philosophers and pundits may debate music’s place in the political scheme of things, Charles Amirkhanian has moved beyond words to action.

Inspired by five anniversaries - the 20th anniversary of the Other Minds Festival of New Music, which he founded; his own 70th birthday and that of U.K. composer Michael Nyman; the 75th birthday of Beirut-born Armenian composer Tigran Mansurian; and the Centennial Commemoration of Armenian Genocide, which has impacted Amirkhanian and his Armenian family on the deepest levels – he has created a remarkable three-day festival (March 6, 7, and 8 at SFJAZZ Center) in which the personal and political merge.

Other Minds maintains a commitment to composers who extend the American experimental tradition; for the anniversary season, the festival acknowledges past and present with the legendary Pauline Oliveros. Oliveros, who performed at OM’s predecessor, the Composer-to Composer Festival in Telluride, Colorado, plays accordion in the world premiere of her Twins Peeking at Koto (March 7).

Two composers who performed at the Colorado festival – Lou Harrison and Australian maverick Peter Sculthorpe – are also honored this year (March 6). Harrison’s final work, Scenes from Nek Chand, composed for OM 2002, is reprised by guitarist David Tanenbaum. Harrison, a staunch pacifist, was an out gay composer who was in a bi-racial relationship long before U.S. desegregation. He also advocated for the universal language of Esperanto as a way to bridge nations and cultures. He would have been pleased to find his work as part of a festival that addresses political issues so directly.

On the same concert are Sculthorpe’s From Kakadu (1993) and Quartet No. 14 “Quamby” for string quartet and didjeridu. Sculthorpe, who had planned to attend the festival before his untimely death, used the quartet to explore the genocidal slaughter of Tasmania’s indigenous peoples by British colonial troops during the “Black Wars” of the 1820 and 1830s.

“Sculthorpe’s music describes white people forcing aboriginals to jump off a cliff to their deaths rather than submit to the colonials,” Amirkhanian tells SFCV. “It’s very graphic in its expression. Everyone who hears it and knows the story is left in a puddle of tears at the end of it.”

While the final concert (March 8) commemorates the Armenian genocide, not everything in the concert was programmed for political reasons. Nyman comes to town for the exciting world premiere of his Symphony No. 2. Looking to the future, his musicians are the San Francisco School of the Arts Youth Orchestra (SOTA).

Amirkhanian, whose music is rarely programmed at Other Minds, celebrates his birthday by presenting his music on all three nights. At least two of his pieces, including Miatsoom (Reunion, 1994-97), have their roots in Armenia. Ditto for Mansurian’s Canti Paralleli on Armenian folk songs for soprano and string orchestra, which is performed the same night.

Miatsoom (Reunion, 1994-97) was composed after Amirkhanian and his father journeyed to the Republic of Armenia in 1994, after the fall of the Soviet Union, to record the sounds of the Armenian people. The country was pretty much in tatters. “There was no economy, no banking, no restaurants, and nothing for sale,” he says.

It was on that trip that Amirkhanian first met ECM artist Mansurian. He didn’t know who Mansurian was when he encountered him playing piano in the Komitas Conservatory.

Amirkhanian was recording Mansurian when he started talking about Komitas. He told him that if it hadn’t been for Komitas (a 19th-century priest and composer considered the founder of an Armenian national school of music), he wouldn’t be the composer that he was.

This leads to the raison d’etre for the final concert. Even people who are acutely aware of the Russian pogroms and Nazi holocaust may not know that the term “genocide” was coined in 1943 to define the Armenian massacres. Turkey’s decades of despicable acts against the Armenian Christians would be far more widely known and condemned if the U.S. had been forthcoming rather than expending considerable energy on silencing the story so as to not endanger its fragile alliance with its NATO ally.

There is now a public record that’s been discovered in Turkish libraries of the actual orders that went out to kill Armenians simultaneously, in every major city all over the country, on April 24, 1915. We also know that in the 1890s, when my grandparents were attacked and their families fortunately got out before the big genocide, there were attacks that were simultaneously calculated all over the Ottoman Empire.

All of our families lost everything they ever owned. They also lost all their history, because the US refuses to name the 1915 slaughter a genocide. It’s painful to feel that this act is not recognized in the way the Germans recognize what was done under Hitler.

One of the reasons that so few Americans recall the Armenian genocide may be found in a Wikipedia entry on the suppression of films based on Austrian novelist Franz Werfel’s The Forty Days of Musa Dagh. The novel, which tells the tale of an attack on an Armenian town during the start of the genocide, was widely read in the U.S. in the 1930s and ‘40s.

There has now been research into the Armenian genocide and historical accounts of it, but Amirkhanian's personal stories are still harrowing:

My maternal grandmother was four years old when she was shot in the eye with a bullet that went through her nose. I grew up with a grandmother whose nose was caved in with a scar, and I didn’t know she had a glass eye until she died.

After the funeral, I went into her bedroom to try to think what it would be like to lose her, and I opened a drawer in her dresser to discover all these eyeballs staring at me. I ran screaming into the living room asking what it was, and they told me that she had a glass eye. That’s when I realized that something was not right in my family. I was nine, and no one had ever talked about it.

My father was born in Fresno, three months after the 1915 genocide. There were 3 million Armenians left, and 1.5 million were killed. Those they didn’t get were psychologically damaged. My father’s middle name was Vrage, which means “revenge.” He’s a really sweet man, but that’s what his parents felt. That’s pretty indicative of some of the anger on the part of a lot of Armenians.

I don’t walk around angry all the time, but I do think it would be nice for people to face up to what happened. It would make Armenians everywhere feel like they can go back to their homeland. Right now, I can’t go back there and go to the area where my relatives are from, because I would be followed by secret police. They will not let Armenians go to Eastern Turkey because they’re suspect as terrorists.

“In the end,” says Amirkhanian, “the political act is to do the concert, name what happened, and remind people.” As with the Holocaust, we who are reminded will not forget.