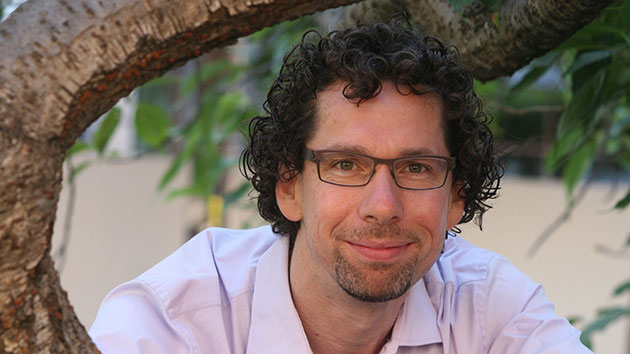 Hearing a week or so ago that he’s one of four composers chosen for a $20,000 award from the American Academy of Arts and Letters, Kurt Rohde noted, “You still have to make good work,” and turned himself towards next week’s performance of his opera, Death With Interruptions, a project several years in the making.

The opera came to life while UC Berkeley historian Thomas Laqueur was involved in a long-term project on death and the dead human body. Laqueur, also an amateur cellist and a fan of classical music, shared with his cello teacher, Leighton Fong, his fantasy about examining death in operatic form. Fong, a member of the Left Coast Ensemble, referred Lacqueur on to Rohde, one of the Ensemble’s violists and a composer, who’s also on the Music Department faculty at UC Davis.

The story to hang these things on and the title of the opera are drawn from a novel by Portuguese Nobel Prize laureate José Saramago. It involves an interaction between Death and a Cellist, vocalized and personified here by soprano Nikki Einfeld and baritone Daniel Cilli, respectively. A third singer, tenor Joe Dan Harper, “is a multiple personality role and has to switch voices back-to-back”, composer Rohde points out. “He’s playing The Scythe, the assistant to Death, but also the role of The Narrator. And he’s also The Dog, the only creature who can see Death when she’s not visible, and also sees Death becoming a human and getting together with [the Cellist].”

Any backup for the Cello? Besides his representation in instrumental form, as bowed and fingered by Leighton Fong? “There’s a small core ensemble that supports Leighton, piano and percussion,” responds Rohde. “And in the back of the stage is a string quartet [drawn from the Left Coast Ensemble] who are filling in the role of an orchestra.” Rohde himself will leave viola duties to his colleague Phyllis Kamrin and will instead be plucking and bowing with horsehair the inside of the onstage piano, with Eric Zivian at the keyboard. Fellow Davis faculty member Matilda Hofman will conduct.

“In the novel, there are a number of references to Bach and Schumann, so I use those sources not as quotations, in a post-modern way, but as oblique references,” says Rohde about his musical score. “There’s also the Tristan chord, from the opening of the Prelude, and “The Dance of the Blessed Spirits” from [Christoph Gluck's] Orfeo, which I’ve recomposed, all the counterpoint is ‘wrong’.”

There’s more fun to be seen, as well as heard. “We have the singers walk around and, in doing so, physically come in contact with the players. There are also ‘humble instruments,’ like harmonicas, rattles, and little accordions which The Scythe and Death, these non-corporeal creatures, try to figure out how to operate. They pick them up, discover what they are, and perform, in this naive way. The instruments are part of the music of man, and that’s part of the transformation that occurs with these creatures.”

Saramago’s story, as channeled in the opera, “is very dark satire, sort of funny, but heartbreaking. It shows how living our lives is such a bureaucracy, just getting through the day, but Death trumps the bureaucracy of life.” Rohde’s own life, as financially bolstered by his recent award, will include a recording of either a string quartet or a four-hand piano piece in the near future.