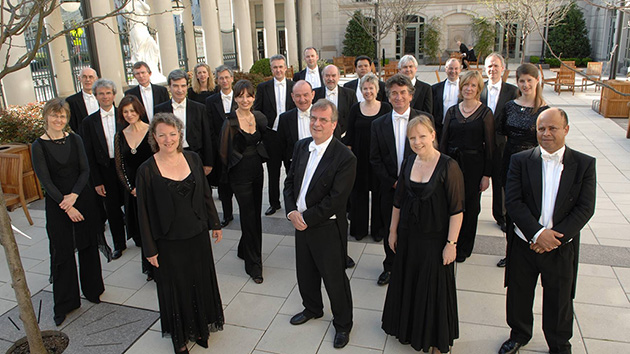 Musicians have always struggled to fuse refined artistry with raw emotion and attain a balance between restraint and bravura. Academy of St. Martin in the Fields’ recent performance with pianist Jeremy Denk at Davies Symphony Hall achieved just that: The program of Bach and Stravinsky juxtaposed rich melodies and savage dissonances with classical tropes and textures.

Stravinsky’s Concerto in D major for String Orchestra demonstrates a subversion of a form dating back to the Mozartian era. The vibrato-less violins brought an ethereal airiness to the music. Indeed, some of the finest moments in both the Stravinsky pieces, which bookended the concert, were harsh, angular phrases, played with a seamless legato that dissolved into nothingness in a split second.

Tremolos in the third movement rang through the hall with perfect clarity and synchronization in the low strings, contrasting with the rich melodies of the violins. The second movement felt almost like a parody of an early Beethoven slow movement, pairing tradition with quirkiness. The players brought out the concerto’s humorous subtext in the comically abrupt transitions and subdued pizzicatos.

Jeremy Denk brought momentum to J.S. Bach’s Keyboard Concertos No. 1 and No. 5 — though, at times, he substituted electricity for nuance. Denk’s first performance evoked the fiery passion found in his recordings of Ives and Ligeti. The conductor-less chamber orchestra, directed by the absent, yet forever-present Joshua Bell, often sounded like they were accompanying the piano, while occasionally breaking free to dazzle with bold Beethoven-esque unisons, such as at the top of the second movement. All told, Denk and ASMF’s dynamic control was nothing short of inspired.

The concert, though splendid, was not without its flaws. Denk’s playing was heavy-handed in the first piano concerto, with a harsh tone better suited to the likes of Ives than Bach. Some rapid runs felt rushed and could have benefited from a conductor’s baton. In addition, the resonance of Davies didn’t always cooperate, sometimes muddling the piano. Denk appeared to adapt to the acoustics of the hall in Concerto No. 5, achieving a lighter, tighter technique and crisper articulation.

Whereas the first work by Stravinsky emphasized ironic dissonance, in Apollo, the composer treats dissonance as an organic part of the texture and harmonic language. Apollo follows a more traditionalist footing in “ballet blanc” — worlds apart from Stravinsky’s rhythmically primal Rite of Spring.

Here, ASMF found a stoic romanticism, playing every phrase and countermelody with superbly balanced voicing. Echoing the Russian romantics, the orchestra muted the modernist aspects of Stravinsky in favor of the bubbly vitality of a Tchaikovsky ballet. The piece ends with an unsettling tremolo played against a legato melodic motif, harkening back to the final movement of the opening concerto, performed with disquieting grace.

While Denk’s conducting may have suffered from sporadic moments of exuberance bordering on lack of control, he brought a level of passion befitting St. Matthew. It was a memorable performance that combined a perfectly balanced chamber orchestra with a brilliant rising pianist, who has boldly branched into Baroque from the Modern era, for which is he is best known.