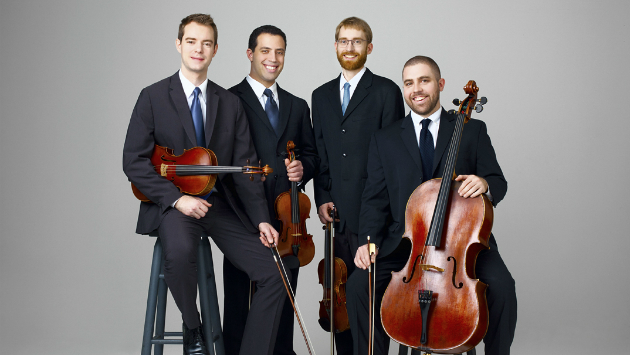 “What happens when you get to the age of 60,” John Zorn recently told the New York Times, “is that you have no more doubts.” Sage words from a composer whose latest works, although still eclectic, display marked maturity. But it was for the 80th birthday of Zorn’s friend and colleague, Terry Riley, that the extraordinary JACK Quartet presented a concert at the Palace of Fine Arts on Thursday. The program included Zorn’s six string quartets and the U.S. premiere of Pandora’s Box, for quartet and soprano.

Formed at the Eastman School of Music, the JACK Quartet — violinists Christopher Otto and Ari Streisfeld, violist John Pickford Richards, and cellist Kevin McFarland — boasts a repertoire list of works by more than 200 composers, most of whom are living. JACK will visit 19 cities this tour season.

For Zorn’s sake, it was unfortunate that the performers deviated from the intended chronological program order. The Alchemist (2011) is a strong work that would have been better received by a warmed-up audience, and two of the early quartets — Cat O’nine Tails (1988) and Kol Nidre (1996) — felt regressive in context. Arnold’s impeccable characterization carried the drama. She demonstrated easy facility throughout the piece’s many demands — rapid, melodically disjunct passages, lush melodies, guttural shrieks.

A celebrated interpreter of new music, soprano Tony Arnold delivered a compelling performance of Pandora’s Box (2013). Through no fault of her own, the text was mostly incomprehensible — in German without translation, and in the extreme high range. Nevertheless, Arnold’s impeccable characterization carried the drama. She demonstrated easy facility throughout the piece’s many demands — rapid, melodically disjunct passages, lush melodies, guttural shrieks.

In comparison, the following quartet, Cat O’nine Tails, was too shallow to hold its own. The Dead Man (1990), however, is a gem among the earlier works. Its compactness recalls Anton Webern, but it is above all a romantic work; the 13 brief movements, or miniatures, bear titles such as “Blossoms” and “Fantasy.” Zorn’s cacophonies are well curated, and the players’ bow-whipping produces a beautiful, atmospheric effect.

Acting as the evening’s emcee, the composer gleefully warned the audience members that they would likely find Memento Mori (1992) a confounding piece. He couldn’t have been more wrong. At 30 minutes long, the work is larger in scale than Zorn’s other quartets, yet is unflaggingly interesting, well edited, and unified in its ideas. Although he often seems either uninterested in or unable to sustain ideas for more than a minute or so, here, Zorn proves his skill. Violist Richards and violinist Otto played with great musicality, and violinist Streisfeld’s left-hand technique was superb.

The finest piece of the evening was Necronomicon (2003). In the symmetrical, five-movement work, the frenetic energy of the outer movements complements the Bartókian slow movements, full of placid harmonies and distant rumbling. The middle movement, reminiscent of an Alban Berg scherzo, is deliciously dark. Again, Zorn takes the time to develop his ideas, resulting in a focused and farsighted work.

The JACK Quartet displayed astonishing stamina throughout the unthinkably difficult program. The members’ coordination never deviated from exquisite: Every movement was flawlessly controlled, yet spontaneous in feel.

However, the players’ intense inward focus prevented them from forging a real connection with the audience. Streisfeld, in particular, was businesslike in passages that could have been affecting. The other members — especially cellist McFarland — were more expressive, but the general lack of outward energy marred an otherwise fine performance.

Zorn famously wrote in 1990, “All genres of music are equal — no one is inherently better than the others.” But his eclecticism has grown sophisticated since the irreverent Cat O’nine Tails. Indeed, the masterful allusions in Necronomicon show Zorn’s style at its most attractive: sometimes exaggerated, but always well crafted. At 61, Zorn is one of the most creative living composers — at 80, he could be one of the best.