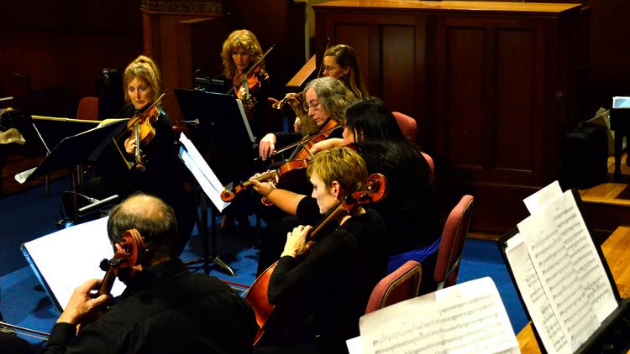 "Music really is about life," says Daniel Canosa, music director and conductor of Echo Chamber Orchestra. "It is a reflection of our life experiences—of people, and love, and war, and excitement. But you need to put your own life to it to make the message vibrate and communicate. It is not just about sound. There is a particular energy behind it."

That energy was apparent at Echo Chamber Orchestra's debut concert on April 26 at the First Presbyterian Church in San Anselmo. The experience was special—not only was the music beautiful, but it also felt incredibly personal.

The idea for Echo came up last January. Canosa had been working at the church for a couple of years with various choral and instrumental groups and said there was this idea "up in the air.” He kept hearing from players that that they were interested in putting together an intimate, collaborative chamber orchestra where they would be able to spend the time to really refine the music.

He asked several players what they thought about the idea, and when more than 30 people expressed keen interest, they decided to set up a meeting.

"I was so surprised that we were all on the same wavelength," said Canosa. "It was so incredible to me because everyone was talking in one voice. We finished the meeting and everybody was kind of electrified, and so happy, just to have a forum where they could actually express their feelings about their own professions and their own lives and with the possibility that we could do something to create a place where these concerns would be met." He points to his heart and says "I remember this meeting here, because it was magical and incredible."

There were no auditions for the group — it was all done by personal recommendation. Canosa said they all knew each other as friends and colleagues and as people, which added a lot to the mix. "The group was very coherent, "said Canosa. And although they were all different ages and from different backgrounds, "they were all one at rehearsal."

The level of professionalism and experience in the group sets a high bar. The roster includes players from the Marin Symphony, the Santa Rosa Symphony, the San Francisco Ballet Orchestra, and the San Jose Opera orchestra, among many others.

Another draw for the players was the fact that they could have a say in choosing the repertoire. When they finished talking about all the music that they wanted to play, Canosa laughed and said "we had a program for like, 10 years!"

They started rehearsing on Sunday nights in March for their April concert.

“The rehearsals are about coming together and making it gel," says Grossman, who added that most of the other groups he plays with only get together a few days before performances. "In Echo we are doing weekly rehearsals where we can discover what works and what doesn't, and then have a few weeks to mould instead of hoping it all comes together in four days."

"What is interesting about this orchestra is that I didn't come with a plan or model to follow,” said Canosa, "so we are in the process of defining ourselves. This was our first experience, so now we are going to get together and evaluate what we did and see where we want to go and how we want to work."

The fact that the format for the Echo is not based on a rigid model is appealing to the players. "The group is much more cooperative, and it is evolving," says Grossman. "We don't know what it will become yet, and we get to decide what it's going to become, democratically."

When asked if he was pleased with their debut concert, Canosa said, "I think we are on the right path to provide something that comes from our most personal desires of making music vibrant — making music alive," he says emotionally. "I think people are really hungry for this sort of thing."

"Chamber music is a labor of love," says Grossman. "Nobody makes money playing chamber music and if they say that they do, then either they are a member of the Emerson String Quartet, or they are lying," he laughs.

Echo does have more concerts planned, and although they hope to eventually make some money, at this point it clearly is a labor of love.

"We all don't want to lose sight of what the heart of it is — why we are doing this," said Canosa. "That is essential. We don't want to become just another orchestra."