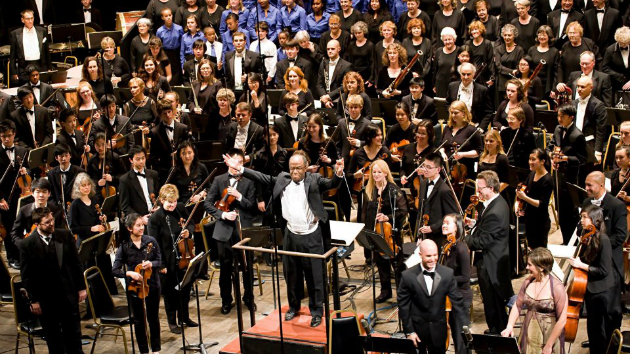 Oakland East Bay Symphony concluded the 2014-2015 season on Friday with a cheeky performance of Bernstein’s Candide. While the lighthearted production lacked bite, it was entertaining.

This concert version of the piece moved quickly and involved many simple props such as hats and masks to keep the action afoot. The narrative shifted from different performers starting with conductor and music director Michael Morgan before settling mostly with baritone Robert Sims, who also sang Pangloss and Martin. Sims’ voice has a light, airy quality that was wonderfully expressive. It was equally a joy to hear him speak as it was to hear him sing.

Many explanatory asides — humorous in tone — were interpolated into the text. Much was made of the many lyricists employed for the piece, and there was commentary connecting contemporary events to the circumstances surrounding Voltaire's novella and Bernstein's operetta. While perhaps tiresome for the more sophisticated, those without previous knowledge of the work clearly appreciated this guidance.

Because of the large amount of spoken dialogue, the soloists were amplified. The fine cast featured many local favorites. In the title role, tenor Thomas Glenn started off ahead of the orchestra, but corrected himself in short order. He sounded warm and open; only a few high notes in "Candide's Lament" were pinched. His "It Must Be So" in Act I was plaintive. He has a winning stage presence and a sympathetic voice.

Mezzo-soprano Tami Dahbura was sassy as the Old Lady; her warmth was a nice foil for Sulker's more brilliant sound. Baritone Hadleigh Adams (Maximillian) has an impressive physicality suited to musical theater and garnered much laughter for his preening in a hand mirror and lilting across the stage. Soprano Katy Stephan was a cute Paquette and supported the other singers with ease.

Morgan led an energetic orchestra and an animated chorus. The dynamic contrasts were not pronounced, but the tempo changes were smooth and clear. Imprecision was made up for in exuberance. The harp had some especially poignant moments.

Carnations were given out during intermission for audience participation in the second half of the show. We were told to take our cue from the chorus. Near the end of "Make Our Garden Grow," the choristers held up their flowers and the audience members eagerly followed suit.