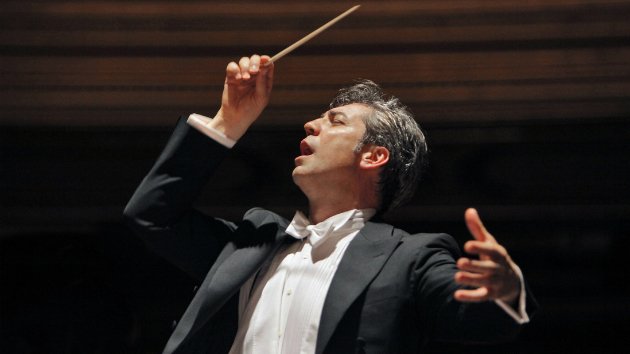 Repeatedly banging on his desk for emphasis – as if his animated countenance, grand gestures, and unbounded enthusiasm were not enough – he, at one point, leapt from his seat, headed to the piano, and began to accompany himself as he sang excerpts from Tutino’s melodious score in an impressively powerful, sonorous baritone. Even the greatest cynic on Earth would have been thoroughly convinced that the Maestro’s heart and soul are inextricably bound to and fed by opera.

By the time the curtain rises on La Ciociara, Luisotti will have collaborated with Tutino on the project for three years. “I’ve spent a lot of time emailing him in his own home, and we’ve sent materials back and forth,” he said at the start of a wide-ranging discussion. “We also talk on the phone a lot. And we see a lot of each other because we’ve been friends for many years.”

Luisotti’s role in the collaboration has gone far deeper than is often customary for a world premiere. Even Tutino’s musical language went through a thorough revision to address Luisotti’s concerns about style and accessibility.

Eager to let me hear some of the opera, Luisotti prepared to head to the piano. But first, he made some points about the musical language he was about to reveal.

“I think the Second Viennese School (Schoenberg, Webern, Berg) is very important,” he said. “I admire Schoenberg very much. He theorized that music can be different, and we can have half-tones put in series to create something new. Many composers, including Berg, Webern, Dallapicolla, and, of course, Schoenberg, did fantastic things. And their theories shocked the 19th-century music worlds. We were between the two world wars, and our minds and world changed terribly. We became more familiar with sounds we didn't understand.”

After playing an atonal passage that sounded like a cross between Schoenberg on a bad day and a child doodling on the keys, he continued. "[I]f you listen to some music, there is a lot of nonsense used to create an emotion. How much of this kind of music can remain in our world and inspire an audience to attend the opera?" - Nicola Luisotti

“I played that just for nonsense. But if you listen to some music, there is a lot of nonsense used to create an emotion. How much of this kind of music can remain in our world and inspire an audience to attend the opera? The audience wants to hear music that it can listen to over and over again, and that makes them want to hear it another time and another time.

“Time is short. Our halls our deserted by audiences because they don’t understand the music. We are not machines. We are not airplanes … We are not cars. We are men, we are women. Our hearts beat faster when we’re excited. We have passion, we die, but the machine doesn’t die. We suffer; the machine doesn’t suffer. We have an emotional life. It’s tasty, it’s terrible, it’s too salty, it’s too sweet. We live an emotional life. The music I just played is not emotional. 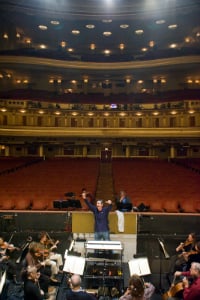 “So I said to Marco Tutino, ‘Marco, we need to go back in the history of music. Forget that the Second Viennese School ever existed. Take Puccini, go over him, and try to do an opera, not in Puccini’s style, but ‘after him,’ as though you never heard of dodecaphony [12-tone composition]. Work from there.

“He said, ‘It’s a challenge, but I’ll try.’ And he tried. He wrote a score that may have some funny harmonies, but they are harmonies.”

At this point, Luisotti could restrain himself no longer. Seizing the score and turning pages urgently, he sang through scenes of emotionally rich, heart-seizing music. There was, of course, no way to assess the impact of well over two-and-a-half hours of music and libretto from those excerpts (you can hear some for yourself here), but what Luisotti  sang and played certainly had the potential to be both moving and thrilling.

“Music!” he exclaimed. “It’s in a very different style than Tutino has written before. When we workshopped the opera last year, the musicians who were on television were crying. Crying! Because it’s opera. We have to bring back the audience. And we don’t do this just for the audience. We do it for ourselves.

“Go back. Look at the musicals on Broadway. Look at rock, pop, and folk music. They use normal harmonies that can be received by anyone. The composers of classical music need to understand that they’re writing music for human beings, not machines.”

The distinction between humans and machines is one that preoccupies Luisotti greatly, both on and off the podium

“An artist never stops being an artist for the public,” he insists.

"Think of Hollywood actors. People think they’re the characters in their movies. They are not in love with Brad Pitt, George Clooney, or Sandra Bullock; they are in love with their characters.”

The reason, according to Luisotti, is that we value an emotional truth in art, which, to a fan, is more telling than reality. The conductor appears to be a true, philosophical romantic.

“I was discussing this with soprano Nicole Cabell after the premiere of La Traviata,” Luisotti continues. “I said to her, ‘Remember, the only moment when you will be able to show the truth is when you sing something onstage. Because in this life, you are a real person, and a real person is full of lies, tricky things, business things. But the life of Violetta is a short three hours, and she will die.’

"When we’re out there on stage, we represent the truth. Everywhere else, we present reality, which is everything but the truth. Real is not true. When you go into the theater, and you see Butterfly, no matter whatever the direction of the regie is, or the action of the orchestra, conductor, and singers, Butterfly will die. The Consul will be the Consul, Sharpless will be just like his name, Pinkerton will cheat her, and she will have a child. You expect this.

“This is why the theater is so important in the lives of human beings; you can sit there and say, ‘This happened.’ It’s the only way to represent the truth. And if conductor and artist conduct and sing this truth, people will believe it. The singer doesn’t represent herself; She represents Violetta or Butterfly or Salome. They are the truth.

"There are artists who continue to play roles in their personal lives, and they stay in another cage. It’s amazing. There is a movie, The Fabulous Day of Mario del Monaco or something like that. It must be on YouTube. He says when he goes to the restaurant, he has to cover his table with a door, because he doesn’t want other people to see him eat because, he says, ‘People think that I don’t eat, or that I eat plates full of roses. I’m normal, I need to eat to sing. But people don’t believe it.’

And then, Luisotti made even clearer how his heart beats, as conductor and collaborator. He is a facilitator for people whose livelihoods and reputations are attached, inextricably, to their very human bodies.

“When singers are slowing down because they can’t go faster, I try to help them,” he says. “I see, he can’t push and is having trouble. One night, for example, the soprano told me, ‘Oh my God, I’m not able to swallow.’ So I wait. I remember a concert with Renée Fleming in Beijing, where she began ‘O mio babbino caro’ [sings] and then stopped after the first line for a long time in order to swallow. It wasn’t an interpretation; it was a need.

“An artist is an artist until the first trouble. When he has the trouble, he’s a person in trouble. There are people who have problems with diarrhea on stage, and they have to enter because the audience is waiting. The audience doesn't consider that we are persons doing something very hard in front of the people. You can’t always be an artist at 8 o’clock. Sometimes you’re there at 6 o’clock, but you have to wait two hours.

“I like recordings, but they are surrogates. They are defined performances that cannot change. Listen to Corelli’s live performance of Fanciulla; it’s one lucky evening. You don’t know how he sang three days later. He was terrified to sing.

“I’ve attended to crises of many singers crying about coming onstage. Ghena Dimitrova had such a fantastic, strong voice, but I was in her dressing room, and she was hugging me, crying like a baby. ‘I can’t do it tonight.’ Giacomini crying that he had 'no voice tonight.' Corelli escaped from Torre del Lago [where the Festival Puccini is held], and they had to go to the train station to get him, slapping him. There are stories that you can’t even imagine.

“We are persons. Sometimes we are close to the gods, and we are lucky to have the greatest night of our lives. That night, everyone is in heaven. But it could be just one night among other nights.

“Karajan said the most beautiful sentence said by an artist. He said, it’s impossible to be memorable every night. The audience couldn’t sustain it, because it’s too much for them. You’d have to be a machine, and we are not machines.”