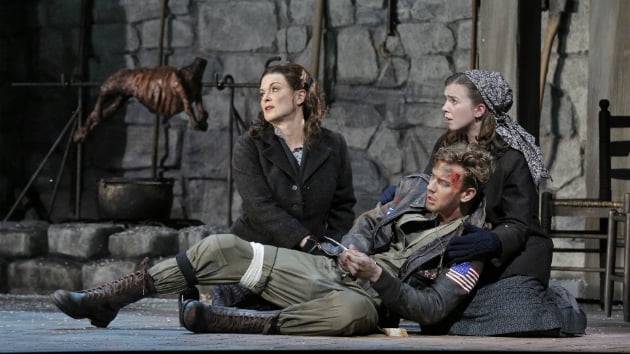 Commissioning a new opera is always a risky business. You might get something new and original (say, John Adams's Nixon in China) or you might get a worthy addition to an existing tradition. Marco Tutino's biography describes him as a member of the “Italian neo-romantic school,” and his La Ciociara (Two Women), which premiered on June 13 at San Francisco Opera, lies firmly in the Verdi-Puccini operatic lineage. Performed by a committed cast and with excellent conducting from Nicola Luisotti, La Ciociara could be a great success, if only it didn't suffer from a terrible libretto and music that, while attractive enough from moment to moment, fails to cohere into a dramatic narrative.

Based on Alberto Moravia's novel of the same name, and on the Vittorio De Sica film for which Sophia Loren won an Academy Award, La Ciociara is rooted firmly in 20th-century history. The opera tells the story of Cesira (Anna Caterina Antonacci), a widow who flees Rome during World War II with her young, innocent daughter Rosetta (Sarah Shafer), seeking the safety of the countryside. They're assisted by Giovanni (Mark Delavan), a black market profiteer whom Cesira knows in Rome – and who rapes her in the opening minutes of the opera. In the country village of Sant'Eufemia, Cesira falls in love with Michele (Dimitri Pittas), an intellectual and pacifist; unbeknownst to Cesira, Rosetta also falls in love with him.

Giovanni reappears in Sant'Eufemia, and now he's a Nazi collaborator. Discovering that Michele has assisted an American airman named John Buckley, he betrays Michele to the Nazi occupiers. Michele is held prisoner and eventually murdered by Giovanni. At the same time, Cesira and Rosetta are raped by Moroccan soldiers serving in the French army, making them two of the 7,000 Italian women believed to have been raped by the Moroccans.

Rosetta, traumatized by the rape, drifts away from her mother and starts to behave in an inappropriately flirtatious manner with men. When Sant'Eufemia is liberated by the Allies, Giovanni, now working with the Americans, claims to have been the person who helped the airman. But Buckley himself is with the Americans and refutes him, leading to Giovanni's capture as a Nazi collaborator and the revelation that Michele is dead. Rosetta collapses in tears, and as the opera ends, she and Cesira once again connect emotionally with one another.

As Tutino said at a recent press conference, Giovanni's role has been greatly enlarged from the book and the film, to create tension with the soprano and tenor. Unfortunately, they've made him a one-dimensional nasty whose only motivation seems to be the desire to have power over others. If this sounds familiar, Baron Scarpia is an interesting villain, which is more than can be said for Giovanni. Where Scarpia bargains seductively, and sadistically, with Tosca in an attempt to gain her sexual favors, Giovanni tells Cesira “you know you want me,” then assaults her. Could there be anything more clichéd than an Italian opera character screaming “Maledizione!” in frustration?

Well, maybe: Michele and Cesira meet over a key, except that it's a flower, a “flaming flower” that blooms whenever it wants. Later in the opera, facing his impending execution, Michele sings an aria of recollection about Cesira and the flower; shades of “E lucevan le stelle.” The flower makes one more appearance, musically and physically, at the very end of La Ciociara. 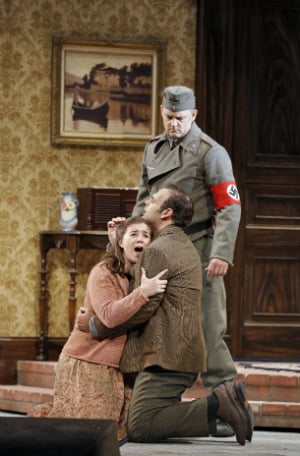 Strangely, for such a traditional Italian opera, La Ciociara needs more arias. We're told what is happening, and we see it before us, but we get little insight into the characters' motivations. This is especially a problem with Cesira. We hear from Giovanni that her husband “never looked at her,” but we don't know what Cesira wants. We don't know much about her past, or her hopes for the future, or her relationship with Rosetta, other than her understandable desire to protect the child.

The same is true of all the characters, and, in fact, the large number of characters who have to do some singing impedes the forward motion of the opera. The opera opens with an unnecessary serenade. The scene in which Michele is captured by the Nazis is prolonged by the repeated appearances of an excruciatingly oblivious character apparently placed in the opera for inappropriate comic relief.

If Tutino's music could create momentum on its own, this wouldn't matter nearly as much. He orchestrates colorfully, but the entire opera felt like it was composed within a narrow range of tempos. Nothing was very fast, nothing was very slow, everything was moderato, and this made for a certain relentless sameness, even as the orchestration varied and pretty, if not particularly memorable, tunes came and went. Perhaps the finest moment was the lullaby Cesira sings to comfort Rosetta after they've been raped.

Mark Delavan, seen here most often as Scarpia, glowered and growled with a voice grown too soft-edged for classic Italian roles. Matching Giovanni's evil, Christian Van Horn towered, and sang, threateningly as a Nazi major. Adler Fellow Zanda Švede was touching as Lena, a village woman who suffers greatly over the course of the opera, and she sang the  opera's opening serenade with panache. Character tenor Joel Sorensen cowered convincingly as Pasquale Sciortino, who helps Giovanni entrap Michele. Buffy Baggott did a fine job with the thankless, comic role of Maria, Sciortino's mother, who doesn't notice the Nazis making off with one of her dinner guests. The charismatic Pasquale Esposito had that draw-the-eye quality singing a popular song in the middle of a celebratory party.

Luisotti conducted with his customary flair and feel for Italian music, balancing an often-noisy orchestra nicely and supporting the singers well. Francesca Zambello's direction was unobtrusive, lacking only in that there's no visible setup of Rosetta's developing feelings for Michele. The sets, by Peter J. Davison, are solidly realistic and quite handsome. The production makes effective use of scrims and projections, and incorporates a good deal of harrowing footage from wartime Italy.

Despite all these problems, the pretty melodies and wrenching story won over the opening night audience, which liked La Ciocara enough to give it a standing ovation. During the curtain calls, the audience also exhibited the oddest behavior I have ever seen at the end of a performance: Despite their obvious pleasure with the performances, they booed the bad guys right along with the applause. Good sports that they were, Delavan, Van Horn, and the three singers portraying the Moroccan soldiers accepted both applause and boos with a smile.

Correction, 6/16/2015: Updated to clarify date of premiere and the title of Christian Van Horn's character, who was mistakenly referred to as a "field marshal" in the program.