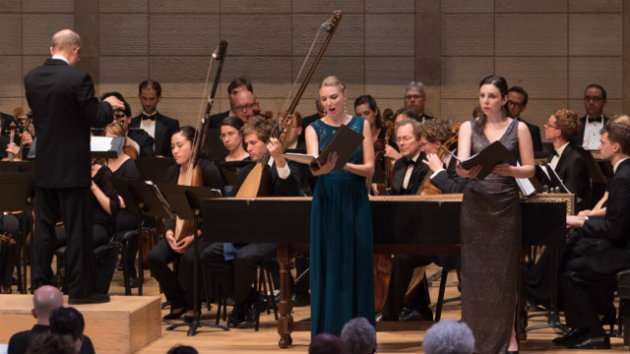 French Baroque composer Marin Marais (1656-1728) was one of the most influential musicians of his time. Mostly known for his more than 550 compositions for the viol, he also wrote a few works for the stage during a brief tenure as director of the Paris Opera. The last of these operas, Sémélé, opened almost unnoticed during the extremely cold winter of 1708-09, when more than half a million French citizens died of hunger and interest in the performing arts was understandably low.

The opera languished for almost 300 years until it was revived at the International Baroque Opera Festival in Beaune, France, in 2006. On August 13 and 14, Jeffrey Thomas and his American Bach Soloists performed Sémélé outside of France for the first time in history, as part of the ABS Festival & Academy 2015.

Even in the visually straightforward but otherwise brilliant concert version by the combined artistic forces of the ABS Faculty & Academy participants, Sémélé is a spectacular opera of grand proportions, requiring full orchestra and chorus, plus 13 soloists; with dynamic choruses, glorious instrumental intermezzi, and even an earthquake and storm scene set to music.

A clever supertitle system was used to make sure that the poetic nature of the libretto and the rich detail of the storyline came across, including its scenes of love, betrayal, revenge, Gods posing as mortals, and the main protagonist ultimately perishing in flames, only to be elevated to a position among the Gods.

The vocal soloists were all drawn from the talented pool of ABS Academy vocalists, and generally very well cast for their respective parts. As Sémélé, soprano Rebecca Myers Hoke was commanding in her delivery, and yet appropriately subdued and compliant, torn between her love for Idas (Jupiter in disguise, a brawny role sung by bass Christopher Besch) and her sense of duty to marry Adraste (heroic tenor Steven Brennfleck), the man chosen for her by her father Cadmus (a bright baritone, sung by Corbin Philips). The tender-voiced soprano Julianna Emanski was a wonderful Priestess with her light and delicate vibrato.

The tender-voiced soprano Julianna Emanski was a wonderful Priestess with her light and delicate vibrato, unfortunately too often overshadowed in volume by a robust High Priest (baritone Ben Kazez). Emanski stood out especially in the aria “Quel bruit nouveau se fait entendre” (What new noise makes itself heard?) in which a series of musical mood changes introduce the arrival of Apollo.

Apollo, sung by tenor Matthew Hill, certainly sounded like a god of music and poetic inspiration, although his phrasing and expression did not always reach a similar level of divinity.

Mezzo-soprano Sara LeMesh impressively portrayed the vengeful Juno (Jupiter’s wife in disguise) during her attempts to manipulate Sémélé. It was a stark contrast with soprano Chelsea Morris, who was playful and flirty in her encounter with Mercure/Arbate (baritone David Rugger) as Sémélé’s resolute maid and confidante Dorine.

Tenor Ryan Strand and sopranos Hannah De Priest and Grace Srinavasan performed minor roles as shepherds in Act IV. Their brief and lovely pastoral exchanges with the chorus drew attention to the sublime ABS Choir, which was ungracefully tucked away behind the equally magnificent orchestra, but was truly fantastic as Thebans, demons, warriors, or as omniscient commentator.