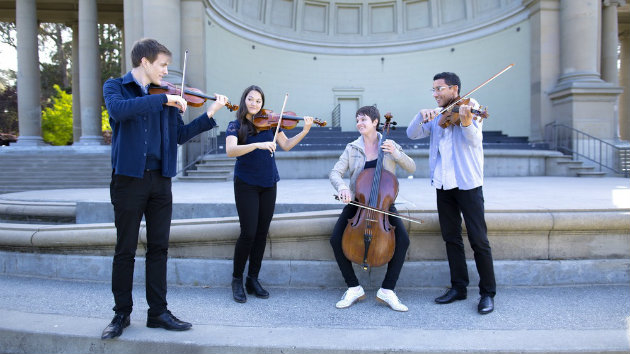 Founded in 2014 by students at San Francisco Conservatory of Music, the Thalea String Quartet is a young quartet in every sense of the word. Fittingly, the group’s program on Friday, September 18, at Old First Concerts featured early works by Webern, Beethoven, and Hindemith.

Each quartet, though dating from the composer’s 20s, represents a unique position in his respective development: Langsamer Satz, written in Webern’s early 20s, bears no resemblance to the composer’s hallmark style; in contrast, Hindemith’s Quartet No. 4, written in the composer’s mid-20s, is essentially a mature work (Beethoven’s Op. 18 No. 1, written in the composer’s late 20s, falls in between). But in an energetic and strongly characterized performance, the Thalea Quartet — Christopher Whitley and Kumiko Sakamoto, violins; Luis Bellorin, viola; and Bridget Pasker, cello — presented a convincing case for each piece.

Webern wrote Langsamer Satz (“Slow Movement”) in 1905, before he adopted the free atonal — and later, 12-tone — style. It’s an unabashedly romantic work that isn’t particularly memorable; you can’t help but infer that Webern was itching for a new language. (He later reflected, “The time was simply ripe for the disappearance of tonality.”) But Thalea gave focus and direction to Webern’s lines. Second violinist Sakamato and violist Bellorin played with especial warmth, and first violinist Whitley’s intense vibrato, which sometimes felt overpowering in the Beethoven, suited this work. [A]llowing the first movement’s phrases to breathe, Thalea reminded the audience that Beethoven’s first published quartet doesn’t begin with a declamation, or even a proper melody, but with a fragmented motif.

Beethoven’s Op. 18 No. 1 (written between 1798 and 1800) is a markedly more mature work that demonstrates mastery of — and, already, challenge to — classical forms. In fact, the group placed compelling emphasis on Beethoven’s transgressions: Allowing the first movement’s phrases to breathe, Thalea reminded the audience that Beethoven’s first published quartet doesn’t begin with a declamation, or even a proper melody, but with a fragmented motif. Although the Scherzo sometimes lacked rhythm in a tempo that was a touch too fast for the trio’s scalar passages (Whitley played beautifully in all of the other movements), the finale was delightfully buoyant.

The second movement, Adagio affettuoso ed appassionato, is among the stormiest of Beethoven’s slow movements. Wisely, Thalea allowed for dramatic development by conserving its expressivity in the beginning of the movement, and, thanks to violist Bellorin’s active characterization of the otherwise inconsequential accompanying figures, the eighth note pulse never plodded.

But the most exciting part of the evening was Hindemith’s Quartet No. 4, Op. 22. This underplayed work, like the Beethoven that preceded it on the program, is highly motivic and rhythmic (though meters change freely throughout the work). It’s also saturated with counterpoint, and the first movement is a slowly unfolding fugue that recalls Beethoven’s Op. 131. Performances of Hindemith often tend toward the cerebral, but Thalea played this Fugato with sincere expressivity, and imbued the second movement’s quirky and uneven rhythms with a sense of spontaneity.

Both of the fast movements are technically demanding, particularly for the viola and cello, but Thalea excelled even in the thorniest unisons, playing raucously (Hindemith indicates “Wild”) yet cleanly. In the third movement Bellorin’s solos were impossibly sweet, and Sakamoto’s playing of the meandering and mournful theme was the most emotionally gripping moment of the evening.

Thalea’s vibrant performance invites the question of why Quartet No. 4, which is probably the most popular of Hindemith’s seven string quartets, is so rarely performed. In part, Hindemith’s quartets have been eclipsed by the quartets of another composer who favored counterpoint, wrote acclaimed works for viola, and also emigrated to the United States in 1940: Béla Bartók. But if the Thalea Quartet were to perform the rest of Hindemith’s quartets as convincingly as it played No. 4, audience members would be left wondering why they hadn’t heard these magnificent pieces before.