Philharmonia Baroque Opens With “Apotheosis of the Dance”

An aura of glamour seems to surround the Philharmonia Baroque Orchestra these days. Its 2009-2010 season, auspiciously titled the “Season of Stars,” is tailor-made for the glitterati, with a lineup of celebrity guest artists that is exceptional even for this ensemble, including Susan Graham, Viktoria Mullova, and Jordi Savall. 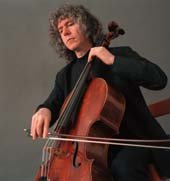 But far from catering to the elite, PBO’s opening concert, “Apotheosis of the Dance,” focuses on the inveterate populist Franz Josef Haydn. Commemorating the 200th anniversary of Haydn’s death, the ensemble pairs his Cello Concerto in C Major, featuring the dynamic soloist Steven Isserlis, with his Symphony No. 101 in D Major, “The Clock.” Ludwig van Beethoven’s larger-than-life Symphony No. 7 in A Major completes the performances, which run from September 10 to 15 in venues ranging from Berkeley and Palo Alto to San Francisco and Lafayette.

Haydn knew the importance of pleasing a crowd, freely acknowledging his desire to satisfy tastes both popular and refined. He enjoyed a rapturous reputation in London, where his “Clock” symphony was completed during his second sojourn to this city. In reviewing the premiere performance in March 1794, London’s Morning Chronicle exclaimed, “As usual the most delicious part of the entertainment was a new grand Overture [symphony] by HAYDN; the inexhaustible, the wonderful, the sublime HAYDN!” Modern listeners may not feel moved toward all-capital-letters enthusiasm, but don’t be surprised if you find yourself unconsciously tapping along with the second-movement’s famous tick-tock rhythm.

A different kind of excitement accompanied Haydn’s cello concerto in 1961 when this piece was rediscovered at the Prague National Museum, after having been presumed lost for more than 200 years. Now a staple of the cello repertory, this delightful early-Haydn work should yield many delights in the hands of Isserlis, an exceptional performer with a distinctive sound and personality to spare. Isserlis’ extracurricular activities prove as endearing as his performances: It’s hard to resist a musician who also writes children’s books with names like Why Beethoven Threw the Stew and its sequel, Why Handel Waggled His Wig. For more whimsy, check out the trivia games and puzzles on his Web site. (The cello jigsaw game is my personal favorite.)

The actual title of PBO’s program comes from the concluding work, a perennial favorite presented here in appealing period-orchestra guise. (For a preview, listen to the ensemble’s own 1998 recording of the first movement on the PBO Web site.) Music Director Nicholas McGegan is clearly excited about presenting this work with his own stellar band of musicians. “This concert is going to end with what I think is probably [one of] the most joyous pieces of music ever written, Beethoven’s 7th Symphony,” he says. “Wagner called it the ‘apotheosis of the dance,’ and he absolutely loved this piece. PBO performed this rollicking, good-fun piece about 10 years ago, and we’re thrilled to play it again.”