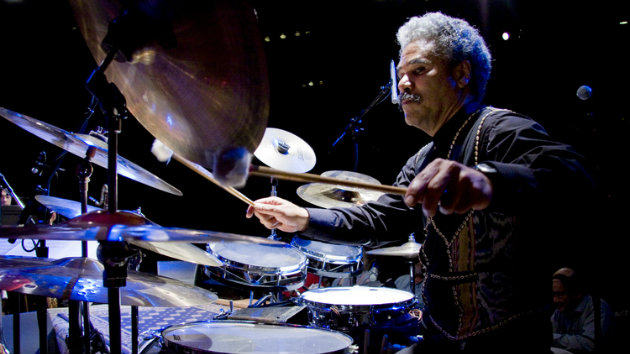 Dr. Anthony Brown has kept plenty busy as a teacher and a practicing musician, but he terms curating the so-called “Field Report” for this year’s SFMusic Day a “labor of love.”

“Thirty-three acts in one day, for free!” raves Brown. “Where else are you gonna get something like that?” He’s referring to the event that will occupy the newly-reopened Herbst Theater and Green Room on Van Ness Avenue in San Francisco, Sunday, Oct. 25.  Brown, a drummer and bandleader,  is performing in two of those acts, and overseeing five, all associated with the Day’s theme of “Asian-American Jazz.”

The son of a Japanese mother and an Afro-and-Native American father, Brown was assigned curatorial duties by the San Francisco Friends of Chamber Music, who present the annual Music Day, now in its eighth year and the second to feature a Field Report. (Last year’s covered “Latin American Connections.”) As author of the Field Program, which will appear in the printed Music Day program, Brown notes that, “the whole Asian-American jazz movement started in the Bay Area in the late 1970s, and culminated in the first Asian-American Jazz Festival in 1981. This year would have been the 35th anniversary.”

Music Day will kick off at noon on Sunday and continue till 10 p.m. Of the four acts comprising the Field Report segment of the program, in half-hour sets starting at 5:15 p.m., the first features Brown with Japanese-American bassist Mark Izu and Afro-American saxophonist Lewis Jordan, all members (with trumpeter George Sams and drummer Carleton “Abel” Hoffman) of the jazz ensemble United Front, which opened the inaugural Asian-American Jazz Festival.

“We wanted to incorporate traditional instruments and Asian sensibilities,” Brown recalls. “But Asian-American artists and activists were also inspired when they saw Afro-Americans listening to [progressive Black jazz musicians] John Coltrane and Charles Mingus, and that music had a message in it,” Brown points out. “So it inspired Asian Americans to create a music that was representative of their experience, as well. And one of the things that resonated was the experience of Japanese Americans, who were just a few decades removed from internment. I remember playing my first gigs with United Front as benefits and fundraisers for social justice issues.” 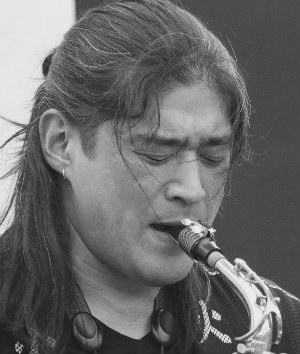 The Field Report segment will continue with Izu joining Brenda Wong Aoki, his wife and an actor and storyteller of Japanese, Chinese, Spanish, and Scottish descent who’s collaborated with her husband since not long after his connection with United Front. “They’ll be bringing in inter-disciplinary elements of theater and dance, beyond just the musical,” says Brown. Next up, “contemporary directions will be represented by [Japanese-American multi-instrumentalist] Masaru Koga and his trio, which includes Filipino drummer Jimmy Bialá and Native-American bass player John Carlos Perea. Then the fourth and final act [of the segment] is Jon Jang [pianist, composer, and another veteran of the Asian American Jazz Festival]. He’ll perform his seminal work Tiananmen, which hasn’t been done in over 20 years, with some of the original members of the Pan Asian Orchestra.”

Brown notes that many Asian Americans who sought expression in jazz also studied Western Classical music. “Jon went to Oberlin, and Mark went to San Francisco State, and studied formally there. Western Classical made it possible to study Asian Classical, because it’s a systemized curriculum, not just a master-pupil relationship, but an academic relationship. In fact when I went to school in 1971, you could not study jazz, you could only study classical.” Brown went on to secure a master in jazz studies from Rutgers and a doctorate in music from UC Berkeley, with an emphasis on ethnomusicology. In the latter specialty, “we actually listened to music and talked about the musician in society, whereas with musicology, it was music for the elite.”

But classical study, he insists, can facilitate the crossing of borders, as represented by other artists participating in Music Day. “What I see is that folks like John Carlos Perea and [Iranian-European-American saxophonist and composer] Hafez Modirzadeh and myself, we all come from different backgrounds and cultures, but we all came through classical music, and use it as a template to not only study other musics but to teach other students.” Brown himself is on the faculty of the California Jazz Conservatory in Berkeley, where he teaches the prehistory of jazz.

Of the other acts to be showcased on Music Day, some will more closely cleave to Western Classical tradition, while others will elude identification. “Genre is a really tough thing these days, and I really don’t know how to handle it,” giggles Ila (pronounced “Isle-la”) Cantor, a guitarist and songwriter, who’ll appear both with her own group, TOUCH, and as part of Darren Johnston’s Broken Shadows. “My music can be jazz-influenced, but also rock-influenced, songwriter-folk influenced, and electronica-influenced,” she continues. “But it’s also like chamber music, which happens to have lyrics and can be a little folky sometimes.” The structure of the TOUCH repertoire, some of which stems from a sort of mythic song cycle, “has sophisticated harmony and arrangement.” Her own ensemble in the Green Room will feature Scott Amendola on drums, Ben Goldberg on clarinet, Rob Reich on accordion, and John Wiitala on bass, as well as Cantor on guitar.

Cantor was tapped by overall Music Day curator Kevin Chen, but does not yet have a formal relationship with the San Francisco Friends of Chamber Music. Funds from the Friends literally gave voice to Brown’s large Asian-American Orchestra ensemble, which will perform the Day’s only full-hour set, in the Herbst Theater at 8 p.m.. “I wrote a piece, 1945: Year of Infamy, commemorating the 17th year of Hiroshima-Nagasaki,” he relates. “I have Genny Lim’s poetry, and a gospel choir, Voices of a Dream, which I started for my last project, Our Eyes On the Prize, which commemorated the 50th anniversary of the March On Washington and Martin Luther King’s speech. I wanted to bring in words, because one of my greatest influences, when I was a kid, was Marvin Gaye’s ‘What’s Goin’ On,’ in 1971. That became an anthem for our generation.”

1945 will commence with Gagaku, the ancient court music of Japan, and will finish with street chants and the hip-hoppish lyric of Michael Franti, “You can bomb the world to pieces/But you can’t bomb it into peace.” Others of the evening’s offerings will present traditional chamber music and Kitka, the Eastern European Women’s Choir. “It’s important to get enough in there that younger folk can have something in their heads to go out with,” Brown insists.