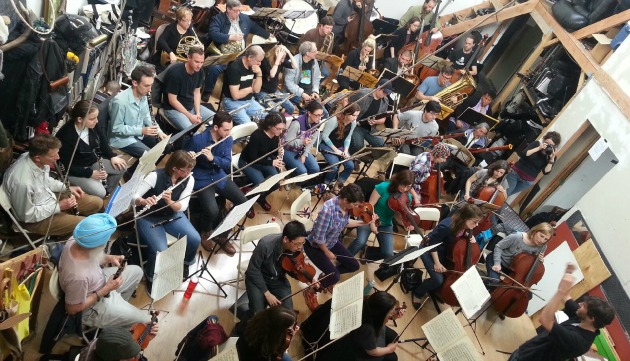 Orchestras shouldn’t just be exciting,” insists conductor David Möschler. “They should be accessible.” He’s embodied this credo in the Awesöme Orchestra, created as a monthly series of large ensemble reading sessions, which audiences can witness for free.

Awesöme is celebrating “the end of our biggest year yet” with a fundraising concert this Saturday at American Steel Studios in Oakland.

Ensembles, Möschler believes, “should represent their community, and look like the people in their community,” as well opening their doors to friends and neighbors. “We have the audience standing or milling about around us, very informal. They can come and go as they please, take pictures, make noises, bring their kids, bring their pets.” As for what’s performed, Möschler’s musicians “should sound like their community, not just play music by dead white guys.”

And when Awesöme does play dead white guys, they make ‘em jump. For a celebration of Richard Wagner’s 202nd birthday last May, at the Firehouse Arts Events Hangar in Berkeley, “I also wanted a snippet of who influenced Wagner when he was a young man." The session included a lively reading of Hector Berlioz’s Symphonie fantastique, for which the all-ages, multiracial audience was almost literally surrounded by Berlioz’s mad magic. “On the other side of that,” Möschler explains, “I thought we should play something influenced by Wagner and his operatic style. So I thought Howard Shore’s [film] score for The Lord of the Rings would be the perfect pairing.”

Awesöme’s era-spanning repertoire has also taken in contemporary pop music and compositions, some of them commissioned premieres, of young, living composers, many of them local. On this Saturday’s program, works by Ottorino Respighi, Paul Dukas, and Leonard Bernstein will stand alongside the scores of Nightmare Before Christmas and The Lego Movie, and music from the English pop group Portishead and Bay Area composer and game developer Matt Montgomery.

Other past and future venues include the Oakland Central Library and several BART stations. “We like to take our orchestra where people need it the most, rather than just to concert halls,” Möschler explains. “It’s not about the performance, it’s about the process.” 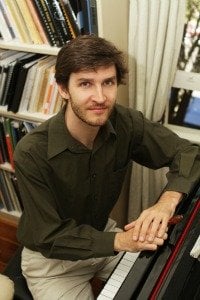 The theme of accessibility resonates also in how the ensemble was formed, and how it’s maintained. “I remember seeing an interview with Sir Simon Rattle, early in 2013,” says Möschler, who’d earned a master’s in conducting from UC Davis, in 2010. “Sir Simon was asked, ‘What do orchestras want?’ and he said something I’ll never forget: ‘They want to be taken on an adventure!’ I realized that everything in my life, all my [pit orchestra] theater projects, playing in rock bands, and every movie I watched and every book I read, all of it was about adventure.”

Wanting to form a group around this spirit, outside his paying gigs, Möschler composed an e-mail “to everybody I thought might be interested”, with the subject line, Orchestra Reading Session Next Sunday. “Then I thought, this sounds so boring, and it should be the opposite of boring. So I changed the subject line to, Awesome Orchestra Reading Session Next Sunday. And Charith Premawardhana of Classical Revolution, a group which had very much inspired me, sent back a message right away, saying, “Awesome Orchestra? Good name!” Since my own last name had an umlaut, I inserted a ‘heavy metal umlaut’ over the ‘o’ in Awesome, and it just kind of stuck.”

So did the appeal of the new ensemble, which didn’t hold auditions and allowed players to come and go at will. “We had our first session in March 2013, and I brought a tub of free PBR [Pabst Blue Ribbon beer] for the musicians. We had about 50 or 60 show up, and I only knew about half of them. But we counted it a success, planned the next one almost right away, and we’re now on session 37.”

Although most of the participating players were conservatory- or university-trained, there was otherwise considerable variety of background and taste. “Either they were total jazzers who got into pit playing, or they had classical training but now had a daytime tech job, and were moonlighting. Or maybe they were retired professionals, just playing for fun. And I kept meeting people who either hadn’t had the time to play in an orchestra, or had groups in which they couldn’t find ‘their people’, where they could really like the repertoire and the conductor and the other players. But they had this common thread, that they loved playing in orchestras.”

Möschler involved the players in selecting repertoire, and sent out .pdf scores ahead of each session. “Some of the people needed to practice more, and others were good sight-readers,” he discovered. “We kind of divvied up the parts at the last minute, and asked, ‘Who wants to play first trombone? Who can bring a glockenspiel?’ We wanted a group that welcomed everyone, but we didn’t always program the easiest music.

“By the end of the first year, the group had ballooned into almost a thousand musicians who had played with us at one time or another. I found a core group of players who really loved the group and kept coming back, and they wanted to organize their sections more. So I hand-picked what we call Awesöme Ambassadors, who help organize each section, welcome new people, and help distribute parts in a way that’s fair. The rest of it is self-policing. If you’re gonna ask for the trumpet solo in Petrushka, you’d better be able to hold it down. When the musicianship is high, we’re gonna have a better experience.”

Möschler continues to look for like-minded ensembles, both near and far. “In Minneapolis, there’s Improvestra, which meets monthly like us and has free sessions, but they’re totally improv. We’ve been in touch with the Burning Man orchestra, Playa Pop. And locally there’s Magik*Magik, which is committed to working with creative pop musicians, but doesn’t do open reading sessions. Groups like Jazz Mafia are always pushing the envelope, with boundary-crossing things. But as far as I know, Awesöme is the only ensemble offering a completely free and open, high-level, reading orchestra, which happens to do special projects on the side. Which makes me think we’re on to something.”

One of the Ambassadors, cellist Freya Seeburger, feels that the welcoming ambience of Awesöme inherently elevates the level of musicianship. “You walk in, and it feels like family and friends and community,” she testifies. “Some of us are world-class musicians, and we’re coming because of that atmosphere.” 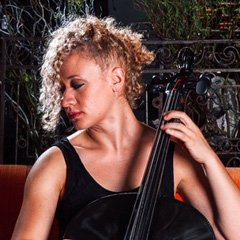 "There’s a trend in the Bay Area, with classical musicians, to think a bit outside of the box,” she says.

A lot of classical players like me are working with bands and in genres that are not classical. So what a lot of composers are doing is bringing those elements into a classical framework, and Awesöme is very often commissioning new works from those composers. I don’t see other orchestras doing that as frequently.

What I’m doing is trying to make a living here, and that means being very flexible, being aware that there’s music outside of classical. Nobody’s doing it solely in classical music anymore; it’s just impossible. But the skills we’ve set up through our classical training are great, and conducive to doing great session work.”

Awesöme is fiscally sponsored by Intersection for the Arts, enjoys corporate sponsorships and in-kind donations, collects voluntary donations at sessions, and pays a small part-time staff, but the players themselves are not paid. “But I’m finding other gigs that do pay, through Awesöme,” Seeburger points out. “It’s a networking thing.”

“And when there’s a rehearsal involved, with tickets being sold or an album being sold, we do pay our players, as close as possible to professional union wages,” adds Möschler. “That’s when it’s produced and financed through a producing organization, or an individual. Every now and then, composers or bands come to us and say, ‘We want to hire you to play on an album, or in a concert.’” At the beginning of this year, Awesöme led off UnderCover Presents’ stunning musical tribute to Sly & the Family Stone’s Stand! album, at Oakland’s Fox Theatre.

As part of this weekend’s fundraiser, Seeburger will appear under her alias, Cellista, with a loop station (supplying her prerecorded music alongiside her live performance) and a ballerina dubbed Jane Doe. Along with her fellow musicians and a bourgeoning fan base, Seeburger will be forming up collective New Year’s resolutions for the ensemble. “What I hope for Awesöme is sustainability, and that they really can serve as a new model for classical music, and for musicians in general,” she says. “What we represent is radical inclusion, and I hope that spreads everywhere.”