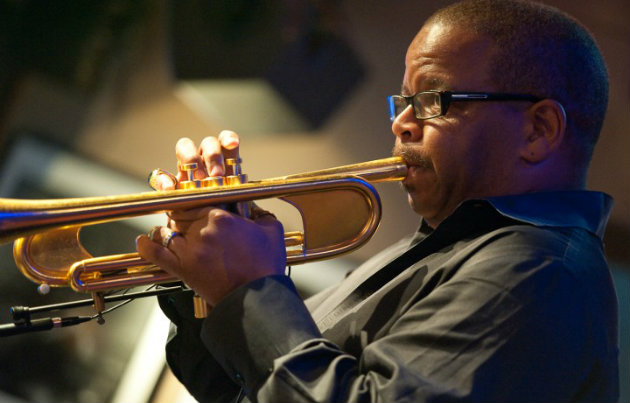 When you’re a world-class jazz performer and composer and your best friend is a world heavyweight champion boxer, you might learn a few things in unexpected ways.

“I was sparring with Michael Bentt one day, and he kept knocking down my jab hand,” relates trumpeter Terence Blanchard, from his home in New Orleans. His buddy Bentt, born in England but raised in the U.S, won the World Boxing Organization’s heavyweight title in 1993 before becoming a film actor.

Blanchard had been a long-time fan of boxing. But, “It was frustrating,” he continues about his friendly fight with Bentt. “And then Michael said, ‘Hey man, you gotta learn how to adjust!’ And I went, ‘Wow, it’s like music. You play with a band that jumps off to another key, and you gotta adapt. Like Michael always tells me, ‘Trust your training!’”

It was also Bentt who shared with his friend the story of Emile Griffith, a boxer who’d claimed welterweight and middleweight world championships in the 1960s, but was best known for putting Benny “The Kid” Paret in a coma in 1961. Paret had impugned his opponent’s sexuality during the weigh-in for the welterweight match, inflaming the bisexual Griffith. After winning the bout and later learning that the coma had been fatal, Griffith remained haunted for the rest of his life. Blanchard was haunted in a positive sense by Griffith’s story, but never imagined he’d turn it into an opera, Champion, receiving its West Coast premiere this week at the SFJAZZ Center.

Blanchard, now 54, benefitted from the top-notch musical training available in New Orleans schools, some of it at the New Orleans Center for the Creative Arts, under Ellis Marsalis, whose son Wynton was a childhood friend. The Center’s Roger Dickerson mentored Blanchard’s composition of his first piano concerto when he was 16. And at home, Blanchard was encouraged by his father, Joseph Oliver Blanchard, an insurance company manager and part-time opera singer. “He was the guy who opened my eyes to the world of art, as an African-American male, living in an African-American community. But coming home and putting on operatic records, that was just some shit you didn’t see on television.”

“He was the guy who opened my eyes to the world of art, as an African-American male, living in an African-American community, but coming home and putting on operatic records,” Blanchard testifies. “That was just some shit you didn’t see on television,” he laughs.

Blanchard followed the migration of the Marsalis brothers, Wynton and Branford, to the New York City area, studying trumpet and saxophone at Rutgers and replacing Wynton in Art Blakey’s top-notch Jazz Messengers ensemble, where he served as both trumpeter and musical director. An essential player in the so-called Jazz Resurgence in the 1980s, Blanchard also toured and recorded with fellow New Orleans native and saxophonist Donald Harrison.

In 1989, he composed the first of a slew of scores for director Spike Lee, which led to other film and TV work. After sharing GRAMMYs for his part in recordings by leaders Art Blakey and McCoy Tyner, Blanchard won the Best Large Jazz Ensemble Album prize in 2008 for his own composition, A Tale of God’s Will (A Requiem for Katrina) (on the Blue Note label, featuring Blanchard’s quintet and a 40-piece string orchestra).

The latter work was transposed from Blanchard’s score for Spike Lee’s documentary about the title hurricane, in which both Blanchard and his mother Wilhelmina (who lost her home) also appeared. The Tale ultimately caught the attention of Jim Robinson, artistic director of the Opera Theatre of St. Louis, who invited the composer to meet at a New York coffeehouse.

“When he started talking about me writing an opera, I thought they had the wrong guy at first,” Blanchard chuckles. “But one of the things he talked about was, when he heard the Katrina piece, it seemed to have all the melodic and dramatic qualities that could really make for an opera. And he and Gene Dobbs Bradford, the guy who’s head of Jazz St. Louis, had been mulling over the idea of bringing the jazz and opera worlds together. I was really intrigued, because the artistic side of me always likes a challenge. I’ve grown as a result of challenges.”

It was then that Emile Griffith rebounded as an opera-worthy subject. “In his autobiography, he said, ‘I killed a man, and the world forgave me. Yet because I loved a man, they wanted to kill me’. That part of his story was what compelled me.” In fact, Griffith, in 1992, was savagely beaten after leaving a gay bar in Manhattan. He died on Long Island in 2013 at age 75, afflicted by dementia pugilistica, one month after the St. Louis world premiere of Blanchard’s opera about him. 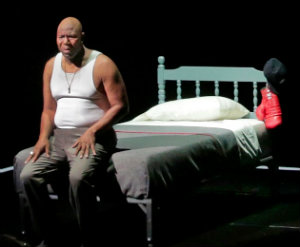 Before receiving the commission for Champion, Blanchard had never witnessed a live performance of opera, much less written one. So Opera Theatre of St. Louis hosted his attendance at a season’s worth of productions, and the composer emerged impressed, as well as educated. “I looked at a lot of the music of the guy who did the opera about Nixon, John Adams,” Blanchard relates. “And one of the things I was impressed with was that you could hear Americana. Then Stephen Lord [artistic advisor for opera studies at the New England Conservatory] was talking about how it might define American opera, to bring in the world of jazz. That opened the doors for me creatively, because it really wasn’t about writing an opera, it was about telling a story.”

His jazz cred had, of course, informed his many movie scores, but “mostly when I’ve done in film, it still sounds like a jazz band playing with an orchestra. What I wanted to do with this opera is take the language of jazz — the rhythms, the colors — and write that for the orchestra itself, not trying to make the orchestra swing, but setting a language for telling Emile’s story.” That’s why he refers to his creation as “jazz-in-opera”, rather than as a “jazz opera.” The libretto is by Pulitzer-winner Michael Cristofer, another of Blanchard's mulitalented friends, who's also an actor and director of several films scored by Blanchard.

Among those taking notice of the production of Champion at St. Louis was Nicole Paiement, artistic director and conductor of San Francisco-based Opera Parallèle. She’d become acquainted with Blanchard’s music as a conductor at the Monterey Jazz Festival, and she believes that, “jazz musicians are often the best musicians, in terms of their ear and how they understand the harmonic language.” Her decision to produce an opera, she says, depends on “an evaluation of whether it’s a piece that will expand our audience and expand the world of what the operatic sound can be.”

Paiement’s interest in bringing Champion west was coincidentally furthered by Blanchard’s selection as a resident artistic director at the SFJAZZ Center for the 2015-16 season.

“Randall was totally thrilled, right away,” reports Paiement about her proposal to SFJAZZ founder and executive artistic director Randall Kline. “He’s always interested in new things, too.” The opera will be the SFJAZZ Center’s first, as well as Opera Parallèle’s first staging in the Center’s Miner Auditorium.

The set, as designed by Brian Staufenbiel, “is an expanded idea of a boxing ring,” says Paiement, “and with the shape of the Miner Auditorium, with the audience surrounding the stage, it’s perfect; people will feel part of the story. The ring is broken into different levels to illustrate the idea that Emile, toward the end of his life, was suffering from dementia, so his memories are broken up.” Three different singers depict the elderly, haunted Griffith, the boy Emile in his Virgin Islands birthplace, and the dynamic young boxer.

“The score for St. Louis was very heavy; there had been some issues of balance between voice and orchestra,” Paiement points out. “So I approached Terence about reorchestrating for a slightly smaller orchestra, so that we could create a better balance and fit in the SFJAZZ Center. This will be a world premiere of the new orchestration.”

Among the genre imports to the production are an electric guitar, a jazz trio, and a gospel chorus that peoples the crowd scenes. But the trio — for this production, the virtuosic Marcus Shelby Jazz Trio — is “treated just like any instrument in the orchestra,” Blanchard notes, and Paiement describes the effect as “sort of the continuo of the orchestra, like in a Baroque opera.” Although there are “melodies inspired by the jazz”, she continues, there’s also “beautiful writing for strings, great lyricism, and beautiful arias,” as in any fine, traditional opera. Four of the classically trained vocalists from the St. Louis production will repeat their roles here, including bass Arthur Woodley as the aging Emile, who opens the opera with his aria, “This Is My Shoe.”

Blanchard’s mother Wilhelmina, now comfortably resettled in New Orleans, was present in St. Louis for the first performance of Champion. Her husband, the operatic inspiration in the household, had passed away when Terence was a young man. “It was an emotional thing,” Blanchard recalls, “because Arthur Woodley, who knew about my childhood, grabbed me when I walked onstage after the premiere and said to me, ‘Your Dad would be proud!’”

While Blanchard continues touring and recording with his jazz ensemble and scoring films, St. Louis has commissioned him to write another opera, based on New York Times columnist Charles Blow’s memoir, Fire Shut Up in My Bones.

In the meantime, Blanchard, Paiement, and their like-minded fellow musicians hope that match-ups between jazz and opera will continue. “Opera is a great art form,” Blanchard asserts, “and if you experience it as a great piece of music in a great venue with great performers, it can be life-transforming.”